Review: Hard Aground by Brendan DuBois 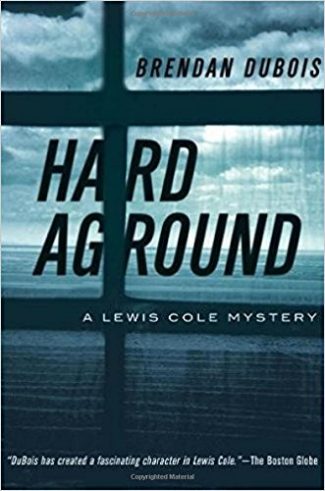 Hard Aground is the 11th book in Brendan DuBois’s series to feature retired DOD analyst now magazine writer Lewis Cole, and it most definitely won’t be my last. Although I’m always up for starting a series at the beginning, this seems to be a good jumping on point since the claustrophobic setting gives the reader time to get to know Cole, and his first-person narrative creates a chummy intimacy.

This installment finds our hero holed up in his historic beachfront New Hampshire home after surgery to remove two tumors from his back. The poor guy has tubes and bladders on his back that collect blood and fluid and have to be emptied often. No fun. Cole is hardly in fighting shape, but luckily, he has a few friends—the intriguingly shady Felix Tinios; Detective Sergeant Diane Woods of the Tyler Police Dept; and his girlfriend, Journalist Paula Quinn—to help him out, because as a harrowing opening scene that ends with Cole blacked out on his bathroom floor illustrates, emptying those bladders is best done by someone else. His convalescence won’t be a peaceful one, though. There’s been a murder nearby, and Cole can’t help but use his sources to dig around a little bit. He’s also been dreaming of his dead lover Cissy and finding, in his convalescence, quite a bit of time for introspection:

“Cissy,” I whispered when I woke up, sheets tangled around me, heart racing, wondering why in God’s name I was dreaming about those long ago days. Why? Was it the surgery that brought my past into rough view? Was my body—no cut free of tumors once again—conspiring with my mind to bring up a mirror to the past, forcing me to look, forcing me to flinch at the good and bad, forcing me to account for what I had become? Or delayed aftereffects from the strong painkiller I had taken days earlier?

And what had I become? For a number of years I had thought about being in government service, working quietly and behind the scenes, against what I thought was an implacable foe…and I was fortunate to find a woman to join me in the life, and the dreams we had…

Now I was along. A magazine writer with too many scars and bad memories, with a woman now, Paula, but for how long? For how long about anything?

I had that strange mixture of dread, sadness, and melancholy, for having briefly revisited who I had once been in the past, and facing who I really was now.

So the poor guy is having some existential angst (I mean, don’t we all when we’re sick and/or injured), and it doesn’t help that he’s been hearing someone come into his house at night. But he/she/whoever doesn’t seem to be disturbing anything. Still, can you say creepy?

It had happened several times in the weeks since I came home from the hospital. At various points during the night, I would hear someone enter my home. Twice I had called my friend Felix Tinios, and once I had called the Tyler Police Department, but each time Felix or the police arrived, they didn’t find anything. The door had still be locked, and there had been no sign that anybody had been in the house.

It would be enough to drive anyone batty, but Cole is made of stronger stuff than that. Things just keep piling up, however, and when an obnoxious couple arrives claiming that they are interested in doing genealogical research, one of the husband’s relatives may have been connected to Cole’s home. They want to come in, look around, and take measurements, but Cole turns them away. He’s nicer than I would have been because he invites them to come back in a few weeks when he’s better. They don’t take no for an answer and make a few more appearances, becoming more menacing every time. One can’t help but suspect that they’re up to no good.

Readers will have trouble putting down this self-contained, claustrophobic read populated with quirky characters and an unusual mystery at its core. Neat little surprises abound with a genuinely scary and surprising finale as the proverbial cherry on top. It turns out that Cole’s home is indeed harboring a secret, and there are some that will do anything to get their hands on it. Then, there’s that nighttime visitor…

Don’t miss this one!