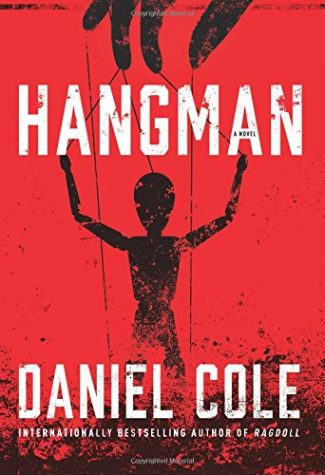 Hangman by Daniel Cole is a gruesome police procedural and the pulse-pounding sequel to Ragdoll.

Hangman picks up soon after the events of Ragdoll, and DCI Emily Baxter of London’s Metropolitan Police is still a mess, both physically and emotionally, from the culmination of that case. The fact that her friend William Fawkes, aka Wolf, is still missing doesn’t help. Baxter is soon introduced to FBI Agent Elliot Curtis and CIA Special Agent Damien Rouche, but she’s puzzled as to why they’ve sought her out. Turns out they come bearing some unusual news: a man with the word BAIT carved into his chest has been strung up along the Brooklyn Bridge, and the victim’s name is William Fawkes. Baxter’s heart nearly stops, but they tell her it’s a different Fawkes and that the killer plummeted to his death while carrying out his gruesome crime. They want her help in interviewing the Ragdoll killer, Lethaniel Masse, who is currently incarcerated. Baxter thinks it’s a meaningless copycat killing, but Curtis and Rouche aren’t so sure.

As sadistic and monstrous as Masse is and was, he’s a shade of his former self, and he still hasn’t healed from his extensive injuries at the hands of Wolf. They don’t get anything out of him, and the disappointment of the group is palpable. However, this is where Cole decides to ramp things up. Before they can even get out of the prison, a riot breaks out, and our trio gets a nasty surprise:

The noise above rose to a crescendo as someone was lifted over the walkway railings and dropped into the empty void at the core of the atrium. The half-naked body ripped the netting from the wall on one side and landed face down just a few metres away from the group.

Curtis screamed, attracting the attention of the men above.

“We need to go. Right now!” said Baxter, but she froze when the dead body made a sudden and unnatural movement toward them.

It took her a moment to realize that the length of knotted material trailing down the destroyed netting had been wrapped round the bloody victim’s neck. Just then the makeshift rope pulled taut, dragging the corpse up into the air as a second, more muscular body, dropped alongside it.

When the riot dies down and the (literal) smoke clears, the team can finally get a look at their crime scene. Turns out one of the bodies belongs to Lethanial Masse, and the other belongs to a thug named Dominic Burrell, who used his own body as a counterweight after carving BAIT into Masse’s chest and PUPPET into his own.

Now, the Brooklyn Bridge case is looking more suspicious by the minute, and since it seems there might be more murders on the horizon, Baxter soon finds herself jetting off to NYC to assist. Sure enough, things only get worse. The pattern continues, and one of the victims turns out to be a police officer, which puts the NYPD into a virtual frenzy. It doesn’t help that the powers that be are determined that, no matter what happens, Baxter is not to claim credit for cracking this case. They don’t know Baxter very well, though. She’s tough and doesn’t suffer fools, and I fell in love with her in Ragdoll, which only served to roughen her already jagged edges.

Although Baxter is a standout, I really enjoyed Curtis, whose mayoral father expects his FBI agent daughter to keep from doing anything to embarrass him. After a harrowing scene where she actually saves Rouche’s life, he dresses her down when what she needed to hear from him was that she did the right thing. Rouche is the most mysterious. He’s quite Zen and keeps things close to the vest, but he does have a sharp sense of humor and reminds Baxter a little of Wolf. Speaking of Wolf: will Cole reveal what happened to him? Guess you’ll have to read it in order to find out!

This creepy book will barely let you take a breath, and Cole’s combination of police procedural and body horror might remind more than a few readers of the movie Se7en—and I mean that as a compliment. This thriller has everything I love: interesting, slightly quirky characters; weird murders; and a race to the finish. If I had one tiny complaint, it’s that there’s some oddly placed humor that doesn’t quite work—but that’s small potatoes. I’d recommend reading Ragdoll before this one, but you certainly don’t have to. Although, you might not want to read either before bedtime, since some of it is deliciously nightmare inducing. I can’t wait for the next book!

Check out Daniel Cole’s guest post about how his favorite screenwriters/directors influenced his fiction!