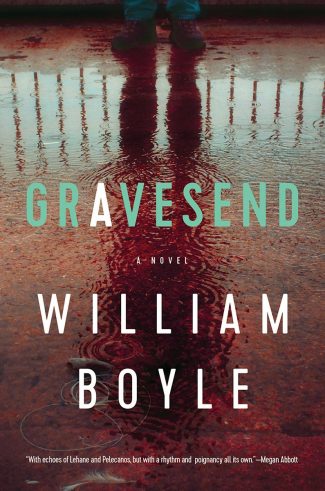 Gravesend by William Boyle is a masterful work of neo-noir, expertly capturing the grit and desperation of a neighborhood in flux and spotlighting the neighbors who find themselves caught up in the crimes of the past.

Everyone thinks they can write Italian-American characters because they watched The Sopranos, but most people are terrible at it. Mob goons are big and dumb and easily defeated by a drunk-ass P.I. because they have become a cartoon. They are loudmouth caricatures of Nicky Santoro from Casino, who despite being based on a real criminal was an outlier of whom the syndicate made an example by burying him alive in the desert with his brother.

I’ve met killers and worked with associates of organized crime, and as Hammett wrote, “the cheaper the crook, the gaudier the patter.” The big-mouth guys who talk like Joe Pesci’s characters (except his very realistic small part in A Bronx Tale) are most often knockaround guys, which refers to losers who can take a fall either by getting killed or arrested because they are never told enough to be dangerous. They are usually the ones caught with the swag. This is not to say that the mafia as it is today is run by criminal masterminds, but the days of the Dapper Don and Vincent “the Chin” Gigante—who famously ruled in a bathrobe and feigned dementia—to the “dizgraciata!” response from his colleagues are long gone.

It takes an insider to get it right, and Gravesend is a Brooklyn story by a son of Brooklyn—one who knows its people and portrays the working class using the relentless magnifying glass of someone who loves it and, like James Baldwin said about America, thus has the right to criticize it endlessly. This is a story of three people, woven masterfully: Conway, whose gay brother’s killer is about to be released from prison; Alessandra, an actress who briefly escaped the gravitational pull of the neighborhood only to fall back into the atmosphere at a self-destructive velocity; and Eugene, the younger nephew of the killer, eager to wear the mantle of his uncle’s infamy.

Meet Conway, on the way to avenge his brother:

Conway flipped the phone shut and looked around at the other people on the bus.

An old lady with shopping bags. A couple of Our Lady of the Narrows kids clutching bulky knapsacks in their laps and listening to iPods. This guy, Hyun-Conway knew of him but didn’t really know him—who ran numbers for Mr. Natale and was sweaty and nervous, holding onto the overhead strap with one hand and gripping a thin stack of papers with the other. And there was the peg-leg homeless lady who rode the B1 and the B64 all day, her wheelchair ornamented with shopping bags. None of them knew he had a gun. None of them knew he was going to get in his car, drive upstate, and kill Ray Boy Calabrese. Probably none of them knew Ray Boy. Or they’d forgotten his face from the papers. The kids weren’t even alive then. A lot got washed away in sixteen years. Conway thought of Duncan’s grave: all those paper poppies from his once-a-week visits. He’d knelt there and made a promise that none of the people on the bus knew about.

Boyle subverts our expectations; this is no garden-variety revenge story. The characters deal with grief in ways that will be familiar only to those who have faced it firsthand. Conway has wrestled with it for 16 years, and Ray Boy’s accomplices live in his neighborhood, walking free. Which makes us wonder: Why has he waited for Ray Boy? There’s a lot more going on. The killer was the paragon of neighborhood manhood. King Guido, which I can say because, like Boyle, I am Italian-American and knew these guys, worshipped and hated them, then laughed at them when they appeared on Jersey Shore in caricature. They had a power we couldn’t understand, their looks and bravado defying teachers and police who wielded their authority on commoners such as us.

Alessandra is a lesser goddess of the neighborhood and lusted after Ray Boy, narrowly escaping the neighborhood mire that swallowed his girlfriend. Gravesend is little different than suburban enclaves with invisible walls, so even if you’re not from there, the story will resonate. It’s the kind of place that kills dreams. Why would you want to leave? You think you’re better than us?

Back at the house now, Alessandra and her father ate dinner. Pasta with gravy he’d defrosted that afternoon and braciole from her Aunt Cecilia. She’d forgotten how good it was to eat like this. In L.A. it had been all hummus and avocados and smoothies, quick and healthy stuff on the run, and she didn’t miss it. This gravy tasted silky and sweet with a garlicky bite and the parmesan from Pastosa was unlike anything she could get out west. They shared a bottle of red wine, something dark and bitter and unlabeled from a neighbor’s basement, and she could barely drink it, the taste was so off, but she forced herself because she wanted to be drunk.

The luster quickly wears off for Alessandra as a sleazy producer-wannabe tries to wrangle her into a third-rate Goodfellas ripoff and she meets the angry glares of former neighbors who think she put on airs. Boyle sets up a perfect triangle of 30s disappointment as Alessandra sees her high school crush crushed by prison while Conway all but stalks her, stunned that she has returned home. Conway still lives at home and works in a drug store with Stephanie, another bird who never left her mama’s nest and is thrilled to go out drinking with her actress friend. And she’s always had a crush on Conway, but he’s a cellar dweller who obsesses on Alessandra and other women he has nothing to offer while sneering at a neighborhood woman with a good job who cares about him. Five years later and Conway would be an incel.

Eugene is full of hate from being mocked all his life, friends with a rich loser nicknamed Sweat who drives him around and pays for pizza and prostitutes. They are 15, but Sweat’s family has enough juice that he never gets pulled over, which is how it is wherever political patronage grows.

A long, dark corridor that smelled like the VFW hall where Grandpa Tony used to take him led Eugene to a no-windows room where Mr. Natale and five others, double-thumb cigars poking out of all their mouths, were engaged in a poker game. Eugene only recognized two of the other guys: Hyun the Numbers Runner, Who he saw on the bus home from school three, four times a week, and Mike Hickey from Eighty-Third Street, who was Philip Benvenuto’s cousin-People called him Hockey Head. A cloud of smoke hung ribbony over the table. Two guys sat on stools behind Mr. Natale with their arms crossed. A cash drawer filled with hundreds and fifties rested on a scattered pile of red and black chips in the middle of the table. Had to be nine, ten grand there. Maybe more.

Of these, I found Eugene’s the least compelling; he is an angry boy who has been bullied for his limp, but there’s an emptiness there, familiar in many “youth gone bad” stories. It’s the most conventional of the narratives. Conway is more fully fleshed, a would-be psychopath without the nerve. Alessandra does things she knows will be trouble because those ruts are dug so deep in the road of her life, but she isn’t stupid. She is drunk on nostalgia and quickly gets sicker on it than if she chugged a bottle of homemade wine.

But Boyle twists them together in a perfect braid, as compelling as Season 2 of The Wire. I haven’t read an Italian-American family story as strong since The Wanderers by Richard Price, and I have been looking. Gravesend is a strong story of Brooklyn noir that doesn’t need to front. It is as authentic as it gets and has the heart of a prizefighter.