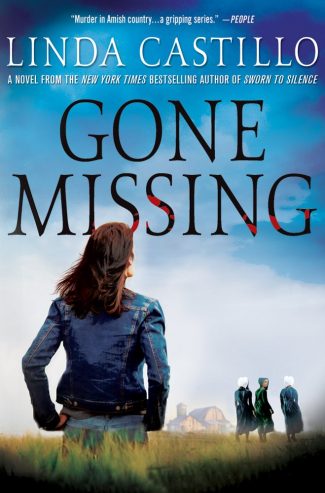 Gone Missing by Linda Castillo is the fourth book in the bestselling Kate Burkholder series—a deeply chilling novel about a rite of passage gone horribly wrong.

Kate Burkholder, Chief of Police for a rural Ohio town, is having a relatively run-of-the-mill day breaking up tussling teenagers when Agent John Tomasetti—her frequent crime-fighting partner and occasional lover—calls with a new case. Amish teenagers are going missing, and with her unique background, Kate might be the investigators’ best chance at getting vital information from the families.

“Anything at any of the scenes?” I ask.

“We don’t have a scene,” Tomasetti replies. “These kids disappeared without a trace. We don’t know where the actual kidnappings—if, in fact, that’s what we’re dealing with—took place.”

As Kate and Tomasetti dig deeper, they struggle to find any connection between the victims beyond the obvious—they were all Amish. With no ransom demands, they’re left thinking the worst.

Could this be the work of someone with a sexual fetish? Or perhaps a religious fanatic who hates the Plain way of life?

There are likely culprits for either motive: an award-winning photographer who’s fixated on taking voyeuristic shots of Amish children and a cult leader actively recruiting among the disaffected youth of the nearby Amish communities.

But when a girl close to Kate is taken, she develops a new theory. All of the missing girls had transgressed in some way. All were at the rumspringa age, when their families would look the other way as they experimented with life Outside, dabbling with the forbidden activities of the Englischers. They drank, smoke, wore revealing clothing, and spent time with boys.

Could the kidnapper be singling out “sinful” girls because he saw their transgressions as being too great to ignore?

When one of the missing is found, the pressure to find the culprit only grows.

I glance at Tomasetti. He’s standing a few feet away from the window, staring through the glass at the dead girl. His expression is dark and inscrutable. “Is it your daughter?” he asks.

The man turns his face to Tomasetti, jerks his head once. Tears stream down his face and run unchecked onto his shirt.

It is a scene in which I’ve participated a dozen times in the course of my career. When I was a rookie, I always believed it was my inexperience that made it so damn hard. The truth of the matter is, it never gets easier. You don’t get tougher or harder or colder, at least not in any way that counts. Every time, bearing witness to another person’s grief cuts a piece out of you.

“Who could do this terrible thing?” the Amish man whispers.

The fourth in the Kate Burkholder series, Gone Missing, is another vibrant, compulsive read from Linda Castillo. The scenery is rich with sensory detail, and the characters—especially leads Kate and Tomasetti—are fully realized and compelling. In another’s hands, Kate could be little more than a schtick or caricature—an Amish woman-turned-cop. But in Castillo’s, she’s a three-dimensional, complicated woman with plenty of motivation, personal desires, and a firm moral compass.

The Amish characters and setting are never treated disrespectfully nor reduced to stereotypes. The mourning parents are still human; their missing children victims yet more than mere plot points.

Castillo peppers in just enough grisly, realistic detail to prove this is a serious story and not a comfortable, cozy diversion:

The air is heavy and still and smells of damp foliage. As we draw closer to the stain, I discern the buzz of hundreds of flies. They’re feeding on the blood, I realize.

The stain is a red-black slick nearly four feet in diameter, mostly dry now, except for the center. I can smell the deep copper scent of it. At least one vehicle has driven through it, leaving a decent impression of the tread. The CSU will take tire-tread imprints, but my gut tells me that more than likely they were made by an inattentive motorist who simply didn’t notice. At some point, some small animal left paw prints at a place where it may have lapped at the blood.

The mystery itself is straightforward—not unnecessarily convoluted but not entirely predictable either. But, as with all of the Kate Burkholder stories, the mystery isn’t the major draw. The characters and the atmosphere are.

First person narratives can be off-putting, but not so with Kate as our eyes and ears. She’s likable. She’s competent. And we instantly trust her. Her relationship with Tomasetti adds a certain frisson to the proceedings, and things develop a bit further with them by the final chapter.

Castillo draws us in with a mere handful of paragraphs on page one. Sinking into the story is effortless, and once settled, you’ll find yourself devouring half of the book before you realize it. Above all else, that’s the hallmark of a great writer.

Read an excerpt from Gone Missing!