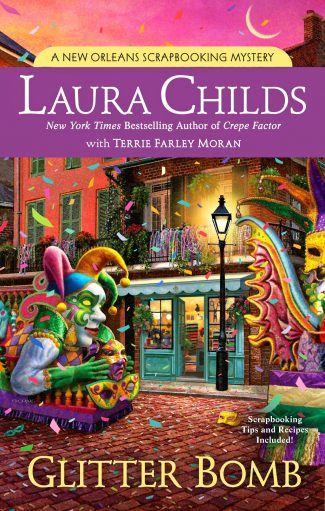 Glitter Bomb by Laura Childs with Terrie Farley Moran is the 15th book in the Scrapbooking Mystery series, where an exploding Mardi Gras float becomes the strangest murder weapon scrappy sleuth Carmela Bertrand has ever encountered.

It’s Mardi Gras time in the Big Easy, and in the midst of all the revelry and bead throwing, the Neptune float explodes during the fictional Pluvius Parade. Carmela Bertrand’s ex-husband, Shamus, is on board and nearly escapes death while Carmela and her friend Ava watch the float crash. Shamus survives, but one of his fellow parade float riders is killed. Is it an unfortunate accident? Or something more sinister? And what happens when Shamus starts to look like a suspect?

All these questions and more will be answered over the course of another fun novel in this series. The authors do an excellent job of introducing the characters so you don’t have to have read the previous books in the series to enjoy Glitter Bomb.

I love these mysteries. First of all, I love the characters of Carmela Bertrand and Ava Gruiex. The two friends know how to have fun, and having Carmela’s ex-husband be involved as a potential killer provides plenty of opportunity for emotion, humor, and conflict.

“LOOKIT!” Ava cried. “There’s your butthead of an ex-husband riding up there on the King Neptune float.”

Carmela Bertrand stood on tiptoes and turned ice-chip blue eyes toward the enormous, glittering Mardi Gras float that was steam rolling toward them, lit up like a Christmas tree against the dark facades of historic French Quarter Buildings. And sure enough, there he was, grinning from ear to ear as he and two dozen krewe members tossed strands of golden beads into the hands of a screaming, frenzied crow.

“Shamus,” Carmela said, his name dripping from her lips like honeyed poison.

You’re just set up for tension of all kinds.

Another reason I love this series is that I get to spend time in New Orleans. I love New Orleans. I love the food. I love Mardi Gras. And I love the personality of the city. All of that comes through in this book, which gives you a special window into the city during Mardi Gras. With the parades and the parties and the king cakes, the bead throwing and the general mayhem—all make a great backdrop for the plot. And the way it’s written, you feel like you’re there. Here’s a description of the Mardi Gras float:

The float was built to represent an ancient seagoing galleon, complete with billowing sails, three decks piled one on top of the other, and a carved, barely decent mermaid figure on the prow. Pluvious krewe members hung off every railing and crossbeam, tossing beads and waving at the crowd…

On the very top deck of the float, a round King Neptune figure was firmly ensconced on his golden throne. His gigantic motorized head lolled back and forth, his mouth gaped open, and his eyes fluttered and blazed yellow. Every few seconds, a surge of golden glitter pumped out of his trident and shot high into the dark night sky.

If you need a break from everything that’s going on in the world right now, pick up this cozy mystery and go to Mardi Gras with Carmela and Ava. The characters, the setting, and the plot are infectious. As they say in New Orleans, “Laissez les bons temps rouler,” which means, “Let the good times roll.”

Of course, after you’re done, you might be inspired to book your own trip to Mardi Gras—or you can just wait for the next book in the scrapbooking series to come out.