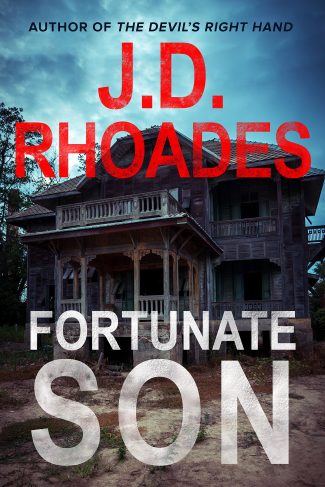 Fortunate Son by J.D. Rhoades is a story of loss and redemption, love and betrayal, and above all, how far some will go to be part of a family.

J.D. Rhoades’s Fortunate Son is a violent, fast-paced crime narrative that goes beyond guns, criminals, and high-speed chases to explore themes like loneliness, hope, loss, and redemption. Within the same story, Rhoades offers a variety of subplots: a man looking to make amends for a mistake he made 13 years ago, a mother desperately looking for her sons, a youngster coming to terms with the fact that he is happy to have left his past behind, and a cop learning to navigate the dangerous waters where informants, dishonest supervisors, and powerful criminals meet. The result of this mixture of interconnected stories is a novel that constantly moves forward while entertaining readers with its cinematic qualities and occasional humor.

Thirteen years ago, the authorities found the Jakes brothers alone in a trailer. They were scared, hungry, and cold. Their mother was nowhere near them and hadn’t been in a while. As a result, they were taken away and placed under the care of the system, which ended up separating the siblings and angering the mother for years. The younger brother found a happy home, and his adoptive parents helped him to grow into a respectable young man and a good athlete. The older brother continued on the hard path and eventually did time in prison.

Despite the years and struggles, the older brother always dreamed of being reunited with his family again. That’s why he shows up with a gun 13 years later and kidnaps his younger brother. The duo sets out for New Orleans, where their mother is currently located. However, the reunion promises to be a weird one.

For starters, their mother is in trouble with the law and caught in a situation between the FBI, her abusive partner, and the man who runs the local underworld. As the brothers make their way to their mother, the sheriff who led to the brothers’ separation—now retired and trying to drown his demons in alcohol—becomes involved in the situation. Meanwhile, in New Orleans, a young deputy helping with the drug investigation on which the mother is an informant as a local liaison becomes inextricably tangled in the case and its plethora of dangerous possibilities. What follows is a fast, hyperviolent, and emotionally gritty tale about desperate folks looking for a way out, drug lords obsessed with expanding their business, and two brothers moving forward despite one’s unwillingness to do so and the other’s big secret, which could shatter the reunion the older brother so desperately craves.

Fortunate Son is full of nuanced characters with a backstory, and the fact that Rhoades juggles them so well is a testament to his talent as a storyteller. Furthermore, the narrative operates on two levels. On the first level, there are the actions and reactions to the things that are going on. On the second, deeper level, there are many secret agendas, hidden connections, and dark secrets that translate into a different reality. The way those two worlds collide is what makes this an explosive read.

This novel comes in at 320 pages, but it reads like a novella. There is a great balance between dialogue, exposition, and action passages, which propels the narrative forward at all times at varying speeds—though none of them is slow. Rhoades has a knack for believable dialogue, but the best writing comes from the clipped style in the action sequences where he manages to deliver a lot without going overboard in terms of setting and descriptions:

Winslow finally steered the van to a shuddering halt as well, about a hundred yards down the road. He put his head on the steering wheel for a second, nearly sobbing with relief. The pop-pop-pop of gunfire made him sit up straight again. If there was a fight, he needed to be in it. He picked up his weapon out of the center console. As he opened the driver’s side door of the van, it was nearly torn off by the black SUV that screamed by him inches away, then slid to a stop, tires squealing on pavement.

Another element that merits attention here is the way Rhoades deals with drama that has nothing to do with crime. Every character in this novel is battling demons. From dark pasts and ruined relationships to drinking problems and a craving for love and attention, human flaws are at the core of Fortunate Son, and they provide a superb counterpoint to other characters who are vicious drug lords who don’t value human life and rely on murder and torture to get what they want.

Lastly, there is something about Rhoades’s prose that gives Fortunate Son a cinematic feel. High-speed chases, dodging bullets, bloody shootouts, and extreme violence serve as the glue that holds the narrative together and keeps readers stuck to the page. Between the action and the dialogue, the novel manages to constantly resemble a solid, entertaining action movie about very bad guys facing regular folks who rise to the occasion because of their convictions. Also, the action sequences are described in ways that—more than a feeling and a place—offer readers an atmosphere complete with sights, sounds, feelings, and actions:

He moved before the plan was even fully formed in his mind, lunging forward toward the black water. One of the men behind him yelled as he ran into water up to his knees. Winslow raised his arms, took a deep breath and dove, as flat and as far as he could. He heard the report of a gunshot, then another. Something burning blazed a trail along his back and he ducked under, swimming in blind animal panic as hard as he could for the bottom. He heard the zip-zip of bullets hitting the water.

Ultimately, Fortunate Son works because it achieves a balance between pulpy action and emotional writing, contains bad guys worthy of a 1980s action movie and regular people with a conscience doing what is right, and delivers visceral emotion as well as coldhearted brutality. Fans of solid crime fiction with an emotive angle would be remiss to skip this one.