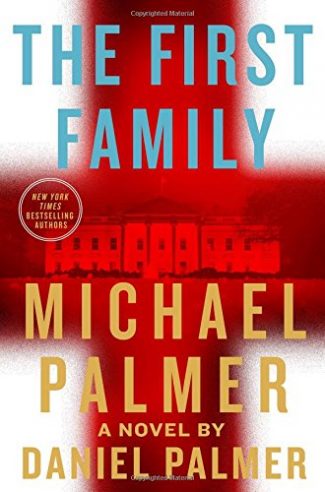 The First Family by Daniel Palmer is a medical thriller where the President’s teenaged son is threatened by a potentially fatal illness that is rooted in dark secrets from a long-buried past.

The First Family, written by Daniel Palmer, is a fast-paced medical thriller that I found hard to put down. The characters are likable and complex enough to feel relatable without pulling your attention away from the twists and turns of the plot.

My favorite character was Secret Service Agent Karen Ray, who is tasked with protecting Cam Hilliard, son of the President and a possible murder target. She is a complex character who is extremely dedicated to her work, but she’s also a mother who loves her son and a daughter who yearns to save her late father’s legacy. These complexities bring her to life on the page.

Some people in the White House, however, view Agent Ray as little more than an over-paid nanny. In fact, the First Family’s doctor, who Ray has several disputes with, makes his perception of her role very clear:

“What you’ve done here is beyond all authority,” Gleason said, his tone still irate. “I’m the one who makes decisions on Cam’s health, not you. Last time I checked, you were hired as his supernanny. I swear I’ll have you fired for this.”

The truth is, Ray is a highly intelligent and well-trained Special Agent who just happens to be a woman. She is not portrayed as emotional or weak rather as a highly skilled agent with a complicated past. I appreciated her complexity, particularly in a genre where women are too often used as nothing more than elements in a plot.

Ray’s instinct and skill become very clear when danger arrives in the form of a black-clad dirt bike rider:

The rider’s hand slipped inside the pack’s open top. Quickly, his arm came forward. While she could not be sure what it was in his hand exactly, it looked long and made of steel. A thought flashed through Karen’s mind: This is what I trained for, the day I hoped would never come.

In addition to the complex characters, The First Family also offers intriguing plot twists that keep you reading.

One of my favorite twists in the book (that I can share without spoiling) occurs right in the very first pages. The first chapter is about violinist Susie Banks, who is about to give the performance of her life.

Her ears picked up each twitch, rustle, and breath in the cavernous room. They were watching her every move. Her delicate face stared back at them with a blank expression that hid her mounting anxiety.

Palmer goes on the describe more about her life, her family, and her history. And then, suddenly, switches to a day in the life of Karen Ray. I almost forgot about Susie, but her story was there in the back of my mind. Just a little tickle. The much later connection was very satisfying and hardly predictable.

The First Family is another fantastic story by well-known medical thriller novelist Michael Palmer’s son Daniel Palmer. The story digs deep into medical issues and rare diagnoses, which I found highly intriguing. Readers who loved Michael Palmer’s books or are looking for a fast-paced crime novel will not be disappointed.