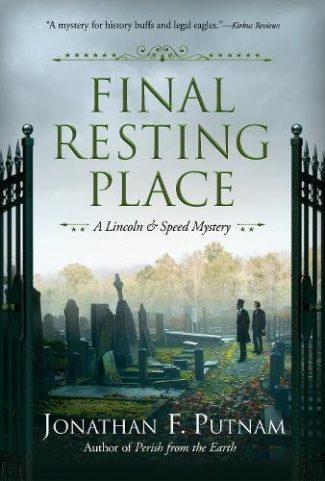 Twenty-nine-year-old Abraham Lincoln has spent his entire adult life running from his past―from the poverty of the dirt-floor log cabin where he was raised, from the dominion of his uneducated father, and from a failed early courtship—but in Final Resting Place, Lincoln’s past is racing back to haunt him.

Suddenly, I heard and then felt a whistling noise hurtling toward me. I dove to the ground. I lay there for a moment, breathing deeply, but there was only silence. Everything was obscured by a great haze of smoke. I’d been frightened by the final volley of shells, I thought as I picked myself up. Smiling ruefully, I hoped no one else had witnessed my lack of courage.

The smoke started to clear. Men and women all around were cheering and shouting out their approval at the remarkable display.

“Bravo!” I called, clapping my hands.

I looked around to see Early’s reaction. He was oddly taciturn, and as the smoke continued to drift away, I gradually perceived that he was lying on the ground…

“I see they got you, too, Early,” I shouted. “No shame in that, I warrant. Not when it’s the first display of fireworks we’ve ever seen… Early?” I tried again. And then, more insistently, “Early!”

I knelt beside his prone figure, now fully visible, and, a second later, I swore loudly. Early’s arms and legs were splayed out and his eyes and mouth were open wide in wonder—or perhaps horror. There was a round hole directly in the center of his forehead. Other than a thin trickle of blood oozing from the wound, Early was motionless.

A patriotic display on the Fourth of July quickly becomes a case of murder—a case that lawyer and state representative Abraham Lincoln will have to confront in court.

But that’s not the only thing on the 30-year-old future president’s plate. The summer of 1838 proves to be an exceedingly exciting one in Springfield, what with an election, several ominous and anonymous letters, rousing tent revivals, and the arrival of Lincoln’s ne’er-do-well father and stepbrother.

Thomas Lincoln and John Johnston seem almost willfully ignorant of the negative effect they’re having on Abe’s career as a politician; the pair are more than happy to tell private tales of Abe’s personal history if it’ll earn them free drinks from the opposition, much to shopkeeper Joshua Speed’s dismay.

Speed, our narrator as well as Lincoln’s roommate and good friend, is also perturbed by his sister Martha’s growing involvement with Democrat Stephen Douglas. Douglas—another lawyer and politician—is Lincoln’s opponent in nearly every aspect of their parallel lives. Not only is he squaring off against Lincoln’s partner in law, Stuart, in the election, he’s also the attorney prosecuting Lincoln’s client, Truett, in the murder of Jacob Early.

…But the crowd’s thrill, I thought as I listened to their chitter-chatter, came primarily from the prospect of a courtroom battle between Douglas and Lincoln. Douglas was the unmistakable rising star of the Democrats in the state; despite his much slower start in public life, Lincoln now seemed a future leader of the Illinois Whigs. Men who knew politics claimed that one day Lincoln and Douglas would meet on the political field in a great debate about the future of the state and—some asserted, however improbably—the nation itself.

A routine dispute between two patronage rivals had suddenly begotten a courtroom contest between two leading political adversaries. In a remote frontier town where courthouse trials were the only form of theater, amid the frenzied atmosphere of an election season, there could not be a more perfect public entertainment.

Final Resting Place is the third mystery starring Joshua Speed and Abraham Lincoln, and Jonathan F. Putnam continues to display his extensive knowledge of the courtroom and Lincoln’s life with deft, atmospheric flair. Everything from the dialogue to the setting to the cast of characters is rich with historical color and accuracy. Indeed, nearly every character who appears—and a surprising percentage of the events detailed, from the cinematic trial to the violent election—is rooted in fact.

All of which proves that the Great Emancipator lived a life worthy of great fiction. Putnam takes the large facts and weaves the slimmest threads of fiction around them to produce a seamless novel. Sprinkled throughout are historical nuggets about lightning rods, land grants, courting customs, Springfield’s development, and dueling etiquette, adding texture and breadth beyond the central plot.

The end result is a book that’s as educational as it is entertaining, so well-written we sink quickly into a world nearly 200 years gone.

While other writers may be tempted to paint Lincoln as a larger-than-life paragon, Putnam shows us a young man who’s fully human. His voice is high-pitched and reedy. He’s unlucky in love and business. And he struggles with bouts of deep depression—so deep that his roommate thinks to hide the knives and unload his gun. (All were true of the man who became the 16th President.)

It can’t be easy to humanize a figure so lofty he’s practically been canonized in American legend, but Putnam makes it look easy. His Lincoln is relatable and much more compelling as a result.

A relatively short book given the scope of its events, Final Resting Place is packed from prologue to closing historical note with grand characters and exciting action. Putnam doesn’t waste a single page as Speed and Lincoln juggle the personal, the professional, and the painful in their quest for truth and justice.

We may already know how it ends for Lincoln, but Putnam makes us wonder what will happen next. Here’s hoping this isn’t the last adventure for Lincoln and Speed.