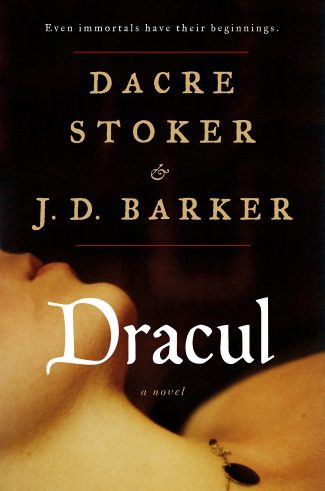 The prequel to Dracula, inspired by notes and texts left behind by the author of the classic novel, Dracul by Dacre Stoker & J.D. Barker is a supernatural thriller that reveals not only Dracula’s true origins but Bram Stoker’s—and the tale of the enigmatic woman who connects them.

The peculiarities of Ellen Crone. That is, of course, where I should start, for this is as much her story as it is mine, perhaps more so. This woman, this monster, this wraith, this friend, this… being.

She was always there for us. My sisters and brothers would tell you as much. But how so, is where inquiries should lie. She was there at my beginning, and will no doubt be there for my end, as I was for hers. This was, and always shall be, our dance.

Her hand always reaching out, even as the prick of her nails drew blood.

August 1868: Bram Stoker is 21 and trying to survive the longest night of his life. He sits in a stone tower, trying to keep someone—no, something—from escaping the room. What lies behind the barred door will destroy him if released.

But outside is danger, too. Another being stalks the grounds, commanding wolves, snakes, and the shadows themselves. Bram is beset from all sides, with only a handful of holy weapons and a Snider-Enfield rifle at his disposal.

Interspersed between these supernatural attacks are the many pages of Bram’s journal, stretching back to his sickly boyhood and the strange nanny who saved his life: Nanna Ellen. From Bram’s journal and, later, his sister Matilda’s letters and brother Thornley’s notes, we learn the full story behind the mysterious Ellen Crone, who played such a vital role in the Stoker household.

What unfolds is a fanciful fiction framed as biography—the facts and experiences that informed Bram’s most famous novel, Dracula.

How did a boy as sickly as Bram Stoker survive to adulthood? Why did Nanna Ellen disappear so suddenly after his miraculous recovery, not long after a local family was found slaughtered in their home? What if the ghoulish stories Ellen told the young Stokers—of the Dearg-Due and the suicide graves on unconsecrated ground—were really true?

I reached for the crate, and Matilda grabbed my wrist. “Don’t—”

I reached back inside anyway, digging at the dirt, brushing it away, uncovering—

Matilda turned her head and gagged. I nearly did, too, at the sight of it, at the torn skin and muscle, at the bone protruding and splintered—the hand had been severed at the forearm and buried in this box, in the dirt.

I pried the fingers apart one at a time, all dry and brittle, afraid they might snap off, soon revealing the hand’s palm and the shiny object at its center. “It is a ring,” I said, plucking it out.

I twisted the ring between my fingers. The detail was extraordinary. The sides were intricately carved with various symbols I did not recognize… which depicted what appeared to be a family crest. At the very center on the head of the ring was the image of a dragon surrounded by a multitude of diamonds so small they seemed more like a glittering of dust than individual stones. The dragon’s only visible eye glowed a bright red, a ruby of some sort.

“May I see?” Matilda asked.

I set the ring in her open palm, and she raised it to the nearest candle, peering at the inside of the band. “There’s something written here… on the inside.”

I thought I saw one of the fingers twitch when she uttered these words.

That was when we ran.

Dracul is—and isn’t—a prequel to Bram Stoker’s classic. Certainly, co-authors Dacre Stoker and J.D. Barker couldn’t have written Dracul without that seminal horror story; the infamous villain plays a hefty role, for starters, and many of the characters here will be familiar to anyone who has read the original, albeit wearing slightly different faces and names.

Determined, resourceful, and artistic Matilda is certainly a stand-in for Mina Harker. Thornley, an expert on diseases of the mind, is essentially Dr. Seward, while his unfortunate wife, Emily, is the doomed Lucy Westenra. Even Van Helsing is here as the mysterious Hungarian Arminius Vambéry, a member of the Hellfire Club who keeps a silver sword in his cane.

And, like Dracula, Dracul is primarily an epistolary novel, the bulk of the story told via first-person journal entries and letters. Stoker and Barker are clearly emulating much of Bram Stoker’s source material.

The real heart of the story, however, is Nanna Ellen. She remains a mystery for much of the book; even as new details are uncovered, new layers peeled back, we still wonder about her motivations and alliances. Is her seeming love for the Stokers, particularly Bram, real or merely an act? Is she as bad as Dracula? Worse?

Is it possible for an undead creature to truly love?

It’s in the unweaving of Ellen’s story that Dracul really shines. That’s the emotional heart beneath the familiar tropes and beats of action. Stoker and Barker do a grand job of juxtaposing the profane and the pure, challenging our preconceived notions of the soulless vampire as laid out by Bram Stoker himself.

Beneath the feather mattress of my bed was a box filled with straw. Each spring, the old straw would be removed and replaced with fresh from the fields behind Artane Lodge. We packed it in tight, and the box, at nearly two feet in height, was the perfect foundation. Beneath Nanna Ellen’s feather mattress lay a similar box, but as I pulled the mattress aside, it wasn’t straw I found but dirt, thick and black. Centered in the dirt was the concave impression of a body.

“She sleeps in that?” Matilda breathed the words. “But why?”

I didn’t answer her, though; I was too busy watching the worms as they wiggled out to greet us, slinking over the putrid soil from within the bed’s bilious bowels…

By framing the fiction as a recounting of Bram’s life, Stoker and Barker are able to interweave actual facts into the narrative. A surprising number of details and characters really are true, making this a cleverly crafted story, grounded in the familiar even when events turn into exaggerated horror and fantasy.

And by interspersing journal entries with moments of Bram’s perilous night watch, letting us see, piece by piece, how he ended up in that tower, the tension and action build in a truly cinematic fashion. Unsurprisingly, Dracul is already being developed by Paramount; with its many jump scares, dramatic chapter cliffhangers, evocative descriptions, and hellishly action-packed climax, this is a story begging for adaptation.

To those well-versed in vampire lore and fiction, Dracul doesn’t tread much new ground. But its biographical framing and focus on Ellen Crone makes it a compelling, entertaining read nonetheless. And despite being nearly 500 pages long, the pace is so crackling and the prose easy enough to follow that you’ll find yourself devouring it in a matter of hours. With cooler nights rolling in and the leaves beginning to change, this is a perfect atmospheric read for October.