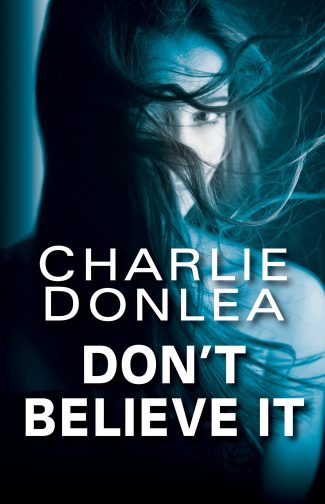 Don’t Believe It by Charlie Donlea is a twisting, impossible-to-put-down novel of suspense in which a filmmaker helps clear a woman convicted of murder—only to find she may be a puppet in a sinister game.

The Girl of Sugar Beach is the most watched documentary in television history—a riveting, true-life mystery that unfolds over twelve weeks and centers on a fascinating question: Did Grace Sebold murder her boyfriend, Julian, while on a Spring Break vacation, or is she a victim of circumstance and poor police work?

Sidney doesn’t know what or who to believe, nor does her audience. The Girl of Sugar Beach is researched, written, filmed, and broadcast almost in real time, with Sidney ahead of her viewers by only a week or so.

First, a flashback to 2007 that conceals more than it reveals. High on a cliffside, overlooking the ocean, a young man creates a romantic scene: “he stood next to the blanket he had laid over the granite, a bottle of champagne and two flutes waiting.” Unbeknownst to him, someone who had hiked up the mountain, fueled by “adrenaline” and “endorphins,” is watching.

I would need their analgesic and energy-producing powers to get back down the mountain as quickly as I’d made it up. To kill someone required perfection, timing, and luck. I hoped all three were with me this evening.

To that end, the body of Julian Crist “was found on the morning of March thirtieth having washed up on the famed Sugar Beach.” The St. Lucia police initially think it was an accident, a fall from the “legendary Twin Pitons,” but then the detectives “suspect foul play.” Cherchez la femme—after two days, they arrest Julian’s girlfriend, Grace Sebold. Nine months after Julian’s death, Grace is found guilty of first-degree murder.

Ten years later, filmmaker Sidney Ryan travels to St. Lucia. Her documentary career has made her the patron saint of last resort to incarcerated prisoners. “As a young and inexperienced producer,” Sidney uncovered the truth behind the murder of a ten-year-old boy, supposedly killed by his mother.

Some great investigational journalism, along with dumb luck, and the discovery of a scathing piece of DNA evidence had been enough for Florida’s newly elected state’s attorney to reopen the case.

Over the years, Grace writes to Sidney many times, pleading for her support.

You are a champion for those who cannot help themselves. As I’m sure you are aware, your accomplishments have echoed far beyond those who have directly benefited. For those like myself, whose fates have long ago been determined, you give hope that somehow things can still change.

Charlie Donlea fleshes out the relationship between the prisoner and the filmmaker—the two women were classmates at Syracuse University 15 years earlier. Their connection persuades Sidney to read Grace’s first letter. Once she decides to investigate Julian’s death, all the minutia around the exhumation of a cold case unfolds in a logical, compelling way. To the outside world, Sidney Ryan is a woman operating at the top of her game. But she knows the hollowness behind that judgment—she’s only as good as her ratings, as the star of her network, Luke Barrington, constantly reminds her.

Sidney was naïve to the backstabbing and conniving that dominated the industry, and had been eaten alive and overshadowed by Luke Barrington during her first year as his producer. Still, Sidney’s style and strong filmmaking skills won many accolades and spawned many lookalikes, including podcasts and YouTube documentaries of little-known crimes.

Sidney’s approach to Grace’s case is clever and a bit risky. The ratings aren’t great at the beginning, but as the evidence mounts that Grace was railroaded, Sidney has a bonafide success—or so she thinks.

Before the series even finishes filming, public outcry leads officials to reopen the case. But as the show surges towards its final episodes, Sidney receives a letter saying that she got it badly, terribly wrong.

It’s a nightmare for Sidney. Grace is released, and Sidney dives deep into new disturbing evidence. Don’t Believe It is reminiscent of Amy Lloyd’s The Innocent Wife—a young woman marries a lifer and works to exonerate him. But is her husband innocent? Is Sidney’s friend Grace innocent? Truth is not easily discernable. If Grace is innocent, then who is guilty? Searching out and telling truth to power can be a dangerous gig because the guilty don’t yield their secrets willingly. Sidney is persistent and courageous, but the story takes a dark, treacherous turn, not revealing its truths until the last page.