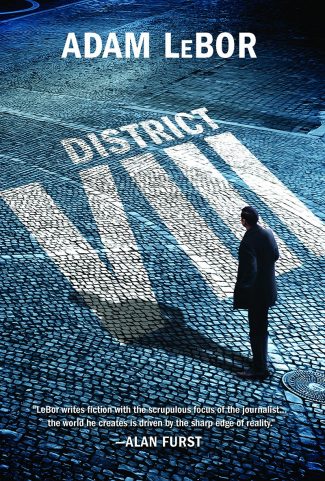 Set in the long, hot Hungarian summer of 2015―and revealing the hidden, criminal world beneath Budapest’s glittering facade―District VIII is the first novel in the new Detective Balthazar Kovacs mystery series from Adam LeBor.

Talk about a book ripped from the headlines.

Adam LeBor’s District VIII opens with a Prologue. It’s 6:05 a.m. on Friday, September 4, 2015, in front of Keleti Station in Budapest. Simon Nazir, a refugee from Aleppo, wakes up in his sleeping bag. He and his wife have been living outside of the train station for days waiting to get on a train to Germany. That is the final destination that many of the hundreds of displaced persons in the same position as Simon are hoping to reach, but the government is not allowing them passage. Simon recognizes someone from Aleppo and leaves his sleeping wife to follow him. Simon will never make it to Germany or see his wife again.

Chapter One is later that same day, 9:45 a.m. in Republic Square. Enter Balthazar Kovacs, or Tazi as he’s known to friends and family. Kovacs is a detective, and he’s on the scene because someone texted him a photo of a dead body. He’s exactly where the body should be, next to a demolished wall with the words “Migrants go home” spray-painted on it. But the body is gone. Kovacs finds a SIM card at the scene and wonders what to do next.

Law enforcement in this ancient city is no easy matter:

Each of Budapest’s twenty-two districts had their own local force. This was the edge of District VIII, one of the city’s largest and best known for being home to Budapest’s main Gypsy quarter. In most murder cases the local beat officers found the body. They sealed off the area and called in the crime-scene and forensics team, who would then look for evidence. Then the case was passed to the district police’s investigation team. They naturally wanted to investigate murders themselves, but nine times out of ten they were passed on to the city-wide murder squad, which made for a perpetual turf war. That was good news for killers, less so for their victims. Complications made for mishaps. Files went missing, reports were delayed; sometimes evidence was even “accidentally” destroyed or lost in transit.

As Kovacs ponders the situation, he spots a young boy and starts to question him. The boy is surprised that Kovacs is a cop because he’s also a Rom, or Gypsy. The two don’t often mix, hence the boy’s initial confusion.

The Roma are a traditionally itinerate ethnic group that has been persecuted and/or at least unwanted in many countries. They’re often scapegoated and stereotyped as being a criminal element. Kovac’s own family is a crime family. His father and brother are both pimps and smugglers. He’s been ostracized by his father for entering law enforcement, although there is still some communication with his brother and other family members. Kovacs is that classic detective who has a foot in multiple worlds but is not comfortable in or fully accepted by any.

The young boy is scared away when a slick black van pulls up, out of which six men emerge wearing full black combat gear. Their leader is Kovacs’s former partner, Attila Ungar, who is now in charge of the newly formed Gendarmerie, a national paramilitary police force that has absolute power and works at the behest of the ruling party and prime minister. Neither man is happy to see the other.

So the law enforcement game in Budapest is messy, to say the least. It is a reflection of the government, which is in a state of flux. The Nazi and Communist past are not that distant, and old attitudes, behaviors, and strategies linger. The old communists who made a financial killing when the political system changed in the 1990s are now using their money to wreak havoc behind the scenes and capitalize on the refugee crisis.

Tourists may see a shiny city with historic sites and swank restaurants, but behind it all is a government so corrupt that passports are for sale and officials take a cut in human smuggling rings. Crime bosses host fight nights where refugees battle each other to win a passport. The academic liberals, as represented by Kovacs’s ex-wife, have so distanced themselves from reality that they’re not even capable of conversation with average people, let alone capable as acting as helpful agents in the city. The media is being fed stories by political rivals, and its integrity and autonomy are being threatened by political corruption.

From its setting to the characters to what’s at stake—this is a fascinating novel. At times, however, it lacked pacing and read more like a journalistic piece than a thriller. That is a small criticism for a book that is bound to thrill readers with its unique look into Budapest’s criminal underworld and government corruption.