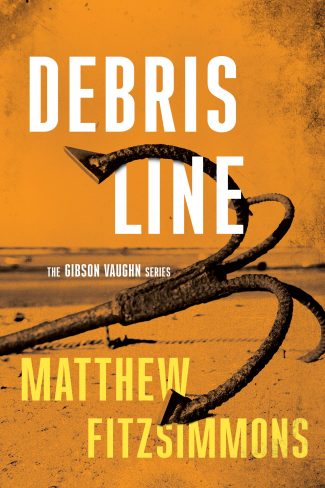 Debris Line by Matthew FitzSimmons is the fourth book in the Gibson Vaughn series.

What has former Marine and hacker extraordinaire Gibson Vaughn been up to since he escaped from a black-ops prison with the help of Jenn Charles, Dan Hendricks, and George Abe, who rescued him. Abe was a friend of Gibson’s father and is essentially family, mentor, fellow-warrior, and more to Gibson—it’s complicated.

Once upon a time, Jenn and Hendricks had both worked for George at Abe Consulting Group. The business bearing George’s name had long since ceased to exist, but George still commanded their loyalty. Gibson, whose history with George had never been fully resolved, didn’t feel the same devotion to the man. But he knew that George was a talismanic figure, especially for Jenn.

Jenn and Gibson are persona non-grata in the United States because the Feds have a bounty on their heads. Thanks to George Abe’s influence with Portuguese drug king-pin Baltasar Alves, they’ve lived on the Algarve, Portugal’s “sun-kissed coast,” for the last six months. Gibson thinks it’s past time for them to move on, an opinion that drives Jenn, crazy even though she recognizes Gibson is probably right.

At the root of it, Gibson didn’t trust Baltasar Alves and didn’t like being at the mercy of his whims.

George once did Alves a huge favor (never disclosed), and in return, Alves protects George’s team. Gibson believes that most favors come with a price-tag attached.

So far there hadn’t been any strings attached to Alves’s hospitality, but Gibson was wary of the benevolence of criminals.

It’s too good to be true, and true to form, it starts to unravel.

Matthew FitzSimmons paints a powerful picture of Gibson Vaughn’s mental state. He has a pre-dawn routine that he leans on heavily, emerging before the tourists venture out of their hotels.

When the street cleaners emerged to sweep up the broken glass and wash away the blood and the vomit and the urine. A dull reset before the good times rolled again.

The morning before the morning. Alone with his thoughts.

Mercifully, he never remembered his dreams—hard memories of home—but he felt them in his body when he woke. Sore muscles and knots in his back like cigar burns. By six a.m., when he could no longer pretend that he might doze off again, he took a long run down to the beach.

It’s an idyllic, restorative routine until a car lurches towards him and tries to mow him down, almost succeeding.

He felt an impact, felt himself spin in the air, bounce off the hood of the car, clatter off the brick wall and back onto the hood.

Gibson is nobody’s fool—someone wants him dead. It’s time for them to leave. Unfortunately, a “series of unfortunate events” ensues. A ruthless Mexican cartel hijacks Alves’s quarterly narcotics shipment. Before Alves will let George and his companions depart, he demands that they rescue the drugs. Now, they have two enemies, Alves and his three feuding lieutenants plus the drug cartel.

But when Gibson discovers there’s far more than drugs at stake, the heist becomes a daring mission of rescue and mercy—and righteous vengeance.

Gibson Vaughn may be world-weary and a cold-eyed realist, but there are some forms of villainy that he can’t overlook. Hendricks tells the others, “Gibson found something on the servers. It’s not … good.” To say more would be too big a reveal. Will it be a one-man operation, or will Gibson have the cooperation of his American brothers (and sister) in arms to pull off the ultimate double-cross?

Gibson intends to stay, but he won’t say what he found. When Jenn says it’s not her problem, Gibson asks her disbelievingly, “What the hell happened to you?”

“We’re a goddamn mobile tragedy. So why do you always have to go looking for more trouble?”

“I didn’t go looking. I stumbled onto it.”

“And what if you did?” Jenn said, “There’s plenty of bad in the world. A lifetime’s worth. So if you tell me you stumbled onto something bad, I believe you. But how about you stumble the fuck away from it again? Everything can’t be on us to fix.”

That dichotomy forms the moral core of Debris Line. If “no man is an island,” where does a person’s responsibility begin and end? Matthew FitzSimmons makes the reader care deeply about the answer—and it’s a cracker-jack thriller to boot.