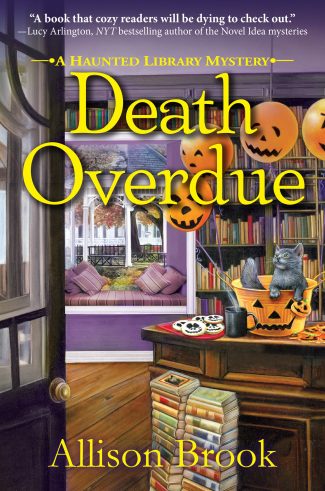 Death Overdue by Allison Brook is the first book in the new Haunted Library Mysteries series.

Pseudonymous author Allison Brook may be a new name to readers, but she has a backlist of mystery, romantic suspense, and young adult titles available under her true identity: Marilyn Levinson. A voracious reader and writer since childhood, she both studied and taught Spanish before returning her attention to fiction. Death Overdue (Crooked Lane Books) is the first entry in her Haunted Library Mystery series—and holds the distinction of being a 2017 Agatha Award nominee for Best Contemporary Novel.

As the story begins, we are introduced to Carrie Singleton, a semi-rebellious millennial whose wanderlust has left her eager to make a getaway from sleepy Clover Ridge, Connecticut, where she has temporarily taken up residence with her Aunt Harriet and Uncle Bosco. An unexpected opportunity for advancement at the local library (which she suspects may be the doing of her uncle, who sits on the board) causes her to reconsider. After all, the head of programs and events is a respectable career choice that comes with a significant raise in pay. But agreeing to take the job means that she can’t skip town; it also places her directly in the crosshairs of both a strict supervisor, Sally, and a begrudging fellow employee, Dorothy Hawkins.

The allure of the position outweighs her reservations, though, and Carrie quickly eschews her quirky style (spiked, multi-colored hair and skull-patterned clothing) for something more fitting of her new title. Her first major event is to host retired homicide detective Al Buckley, who is writing a book on the town’s most notorious unsolved crime: the murder of Laura Foster, wife and mother, who was bludgeoned in her home 15 years earlier. Buckley worked the case but failed to make an arrest; an alcohol problem now behind him, he has professed to finally having identified the culprit. Before he can unveil his new evidence to a room full of curious townspeople—including Laura’s husband, two sons, onetime BFF, and the family lawyer—Buckley falls ill and dies. And while suspicions run high as to the cause, the toxicology reports confirm it: poison.

Demoralized by the fact that this happened under her watch, Carrie teams up with Laura’s youngest son, Jared, to investigate his mother’s murder; the suspect list includes Jared’s family, friends, and foes (including a rumored secret lover)—and he himself cannot be discounted. While this partnership initially hints at the potential for romance, Carrie—who is able to upgrade her living situation thanks to her upgrade in pay—finds herself increasingly attracted to her handsome and mysterious landlord, Dylan. Beyond her sleuthing with Jared, Carrie receives unexpected help from the library’s friendly resident ghost, Evelyn Havers (Dorothy’s aunt), who remains invisible to pretty much everyone but Carrie. That this all plays out against the backdrop of Halloween is fitting and underscores the plot’s more whimsical elements.

The juxtaposition of a cold case with a current one is certainly a compelling premise for a novel. Further, Carrie is a spirited lead whose desire for justice is admirable, even if her motivations occasionally stretch credulity; despite repeated mentions of her youth and edginess, however, Carrie tends to come off as older and more subdued than her years would suggest. And while there’s a suspenseful buildup to the book’s denouement—and a muted-yet-present sense of danger throughout—the finale is both brief and a bit anticlimactic.

Overall, Allison Brook has crafted an auspicious series debut. In addition to a winning protagonist in Carrie, the town’s charming facade, subtle seasonal flourishes, and cast of memorable (if not entirely mortal) characters all make for a welcoming overture. Death Overdue is well worth checking out for fans of cozy capers.