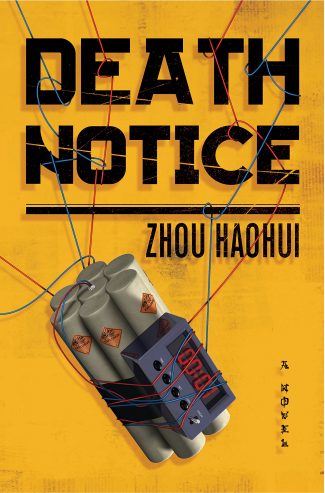 Death Notice by Zhou Haohui is a wild thriller and deadly game of cat-and-mouse, where an elite police squad hunts a manipulative mastermind out to publically execute criminals the law cannot reach.

Once the overture finishes, the first act must commence.

It has been far too long since the overture faded … But the day has finally come.

I can barely restrain my excitement when I think of the beautiful dance about to begin. Won’t you join me, my old friend? I know you’ve been looking forward to this for far too long.

I can see you reading this letter. You’re trembling with excitement, aren’t you? Your blood burns, and an unstoppable pressure is building inside you. I feel it, too.

I smell your eagerness. Your anger. Even your fear.

An ominous letter, a horrifically scarred man, and a respected police officer brutally murdered—Death Notice pulls no punches straight out of the gates.

When Sergeant Zheng Haoming is found dead in his apartment, Captain Han Hao is determined to catch the culprit. The sergeant was a living legend and beloved mentor to scores of police officers—this crime hits especially hard.

The man who reported the murder is, naturally, the first suspect. But Pei Tao is himself a police officer, a captain stationed in Longzhou who was drawn to Chengdu by a taunting letter.

The why behind Sergeant Zheng’s death is connected to a cold case nearly two decades old. A monstrous set of crimes perpetrated by the same killer—one who has reemerged after so many years.

Without pausing, Han asked, “What happened eighteen years ago?”

“And you can’t tell me a single thing about it?”

“There was an investigation here in Chengdu eighteen years ago. The nature of this case was so disturbing that, in order to prevent a panic, it was classified at the highest levels. All investigative work on the case was carried out secretly, by a special group organized for that very purpose. However, their investigation was never concluded.” Pei regarded Han with a grudging look. “I’m sorry, but that’s all I can say at the moment.”

“The case is classified, and yet you seem to know all about it.”

“Don’t you see? I was … involved. This case was what made my career fall apart!”

When Han finally looked at Pei, his expression was mixed. He tried to keep his composure relaxed. “If you can’t tell me any details, then why are you here?”

Pei stared unflinchingly at the captain, and he enunciated each of his words carefully. “To beg you to submit a request to your superiors right away. I’m here so you will declassify the case, and re-form the 4/18 Task Force!”

The 4/18 Task Force has a formidable foe in their crosshairs: Eumenides, a shadowy figure who stylizes himself as judge, jury, and executioner. His return is heralded by a viral online post calling for “justice.” The public is free to post the names of people worthy of punishment—for thievery, rape, murder, or any other despicable behavior—onto an online forum. From the growing list, Eumenides will choose his next victim.

As Pei, Han, and the rest of the team discovers, their target is fully aware of their existence and eager to match wits. Each clue they follow leads to the next piece of the puzzle. Every move they make, the killer is a step ahead. To Eumenides, this is all a game.

But in Death Notice, the clever serial killer isn’t the only danger. The 4/18 Task Force itself is broiling with secrets personal, professional, and dark. Captains Han, Pei, and Xiong; Officers Yin and Liu; tech specialist Zeng; and psychologist Mu—all of them are hiding something from the others.

Will those secrets prove as deadly as the killer himself?

“No.” Pei turned to Han, and his expression hardened. “This is no misunderstanding. You told Mu to investigate me, too, didn’t you? How can I still be a suspect? There’s a murderer out there killing at will, and you’re sending two of our team members off on a wild goose chase. We need to stop Eumenides, not carry out internal investigations. A meeting like this one is exactly the time to bring it up.”

“Captain Pei, you’re right about one thing. I did order Officer Zeng and Mu to investigate you,” Han said diplomatically. “Sergeant Zheng is murdered, and we find you kneeling right next to his body. Then we learn that you were inextricably linked to the tragedies that occurred eighteen years ago. I’d be a fool if I didn’t investigate you.”

“I’m supposed to believe that’s the whole story?” Pei was now seething with anger. “Or was it that I questioned your authority and humiliated the man you sent to tail me? Tell me, Captain Han; what exactly has your investigation into me turned up so far?”

It’s abundantly clear why author Zhou Haohui is one of the three most popular suspense authors in China: Death Notice literally has it all. Dirty cops and noble cops. Tragic love and thwarted desires. A complex, clever villain playing a deliciously long game, whose victims are horrible people who almost deserve what they get. Government corruption, personal vendettas, moral quagmires, and tricky questions about justice. Grisly carnage as the crimes vary from explosions to stabbings, shootings to psychological, sacrificial traps.

This is no cut-and-dried police procedural. The third act is a maze of twists and turns, a jam-packed and adrenaline-charged race to the finish line that rewards the careful reader and surprises the most jaded of genre fans. Death Notice is the first in a trilogy that has already been adapted into a wildly successful online series, and while the final page provides some closure, it’s clear there are still questions left unanswered and a chase unfinished.

The hunt for Eumenides will continue, and you’ll want to rush out and pick up the second installment—just as soon as you catch your breath.