Book Review: A Death of No Importance by Mariah Fredericks 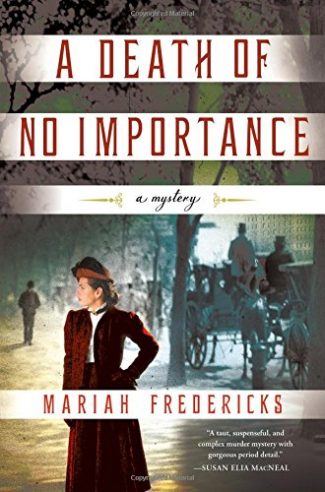 A Death of No Importance

Through her exquisite prose, sharp observation, and deft plotting, Mariah Fredericks invites us into the heart of a changing New York in her remarkable debut adult novel, A Death of No Importance.

You’ll likely go into this novel as I did, thinking it’s essentially Downton Abbey with a murder mystery, though set on our side of the pond in Gilded Age New York City. You’ll be introduced to the intelligent, practical narrator, Jane Prescott, and maybe you’ll get an inkling from what she says about why she’s finally telling her story—one that will make you realize this isn’t just a book about the everyday drama of rich people and their servants, albeit with a scandalous murder involved:

I was Charlotte Benchley’s maid.

But before you dismiss my tale as a gain-inspired fantasy of a woman seeking brief, cheap fame, let me say something. It is the life’s work of some to pay attention to things others wish to ignore. If it is your job to make sure the silver is clean, you must have a sharp eye for tarnish. If the sheets are to be smooth and straight, you must first find the wrinkles. In the matter of the Benchleys and the Newsomes, I saw the tarnish, the wrinkles, and the dirt.

If it is your opinion that a maid does not possess the capacity to understand these things, then there is no reason to read on.

But if your view is otherwise, please, continue.

Jane has gone into service with the nouveau riche Benchley family after the death of her previous employer, a wealthy benefactress to many worthy causes. Charlotte is a social darling despite being from Scarsdale and in only her first season. She far outshines her older sister, the hapless Louisa, and her mother, who means well but has no idea what she’s doing when it comes to the treacherous waters of New York high society. Mr. Benchley is a distant but not unkind head of household—his job has been to make the family fortune and see that it’s preserved. Fortunately for the Benchley women, an established member of the social firmament has deigned to take them in hand (for a fee, as rumor has it). Mrs. Tyler might not be as wealthy as she used to be, but she has connections enough to introduce them to certain influential others of her own set, as well as to ensure that the Benchleys hire someone as capable as Jane to look after them.

Unfortunately for Mrs. Tyler, Charlotte repays these efforts by stealing Norrie Newsome—the gadabout son of a wealthy industrialist—out from under the nose of her daughter Beatrice, with whom Norrie was long thought to have an understanding. Things come to a murderous head at the Christmas party where the young couple are to announce their engagement. Jane soon finds herself investigating the murder not only to protect her employers but also to protect her dearest friend, Anna, whose involvement with the killing she both suspects and dreads.

Anna, you see, is an anarchist firebrand who doesn’t approve of Jane’s choice of profession. It is through Anna that Jane and, in effect, we readers are made aware of the true costs that allow high society to function as it does, on the backs of exploited workers. This is the era of tragedies such as the Triangle Shirtwaist Factory Fire, where a lack of regulations essentially allowed an industry to murder their employees in the name of profit. The politicians were complicit, even up to the highest office, as Anna tells Jane while defending her cause:

As I turned to go up the stairs, she asked, “Do you know what [President] Taft said about the Pullman Strike?”

I shook my head.

“When the soldiers shot six strikers, he said, ‘They’ve only killed six of them. Hardly enough to make an impression.’”

Kissing me good-bye, she whispered, “I wonder, how many do we have to kill? To make an impression.”

A Death of No Importance is a rich, complex examination of society and class that holds up a mirror to our modern era, reminding us of the terrible outrages we spent decades trying to eliminate and warning us of the price of complacency in our ongoing fight for equality and justice. Yes, there are wonderful scenes of a bygone era of balls and private homes and gorgeous dresses, but Mariah Fredericks does not elide the facets that made life less fairy tale than horror story for so many people of the time. And the twist at the end made me gasp in shock! It’s very rare for me to not see a thing like that coming, and I still don’t know how I feel about what happened.

What I do know is that Jane is a wonderful heroine, as gifted in compassion as she is in intelligence, and I enjoyed so much investigating with her and with the small team she acquires along the way. I’m hoping she’ll have more stories to tell via Ms. Fredericks’s talented pen, and soon.