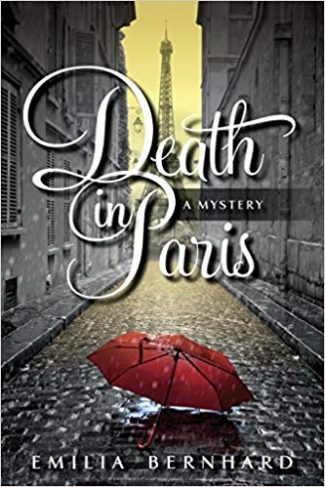 A Death in Paris Mystery

Armchair travelers will revel in Emilia Bernhard’s debut mystery Death in Paris, the first in her new series. Rachel Levis is an American: she came to Paris as a student when she was in her early twenties and decades later she’s still there. The ambiance is believable, grounding the story in reality. A middle-aged couple shares a breakfast of croissants and talks over the news: “Edgar Bowen died in his soup,” says Rachel. Her husband Alan corrects her, “His sleep, you mean.”

“No, his soup. It says here in the nécrologie.” Rachel rattled the pages of Le Monde at him across the table, then read aloud, “‘Monsieur Bowen died, dining alone at home yesterday, after falling facedown into his soup.’”

Alan points out that the two of them only care because “he’s also an expat” who “had died in a laugh-worthy way!”

Rachel returned to the paper, hoping her face expressed disdainful hauteur. She would tell Magda when they met later. Her best friend would grasp the significance of the news.

Unlike Alan, Magda knows that Edgar Bowen was Rachel’s “first grown-up relationship,” and that they were together for two years. Magda remembers him fondly: “‘He was kind; he was thoughtful. I remember him as gracious.’” The friends decide to attend Alan’s funeral. One of the pleasures of Death in Paris is its reverence for classic mystery tropes, like a gathering of friends, families, and foes at a funeral. While there, Rachel overhears someone talking about Edgar’s death.

“I was told he was found facedown in the bowl.” She shook her head. “His hand was only a centimeter or two from knocking over a bottle of good rosé.

Why would something as innocuous as a bottle of rosé wine at Edgar’s last dinner make Rachel think that her old friend’s death might not have been natural? Rachel knows that Edgar “didn’t just have a mild dislike of it; he had a real, determined antipathy.” A reader might think a person’s tastes in wine could change over the years, but Rachel is dogged in her suspicion.

After a funeral comes another set piece: the reading of the will. Rachel receives a call from the law office of Cabinet Martin Frères; they tell her “Monsieur Bowen has made you a bequest in his will, and we are calling to ask if you would be able to attend the reading of that will at his apartment on Monday.” Try and keep Rachel away! She had never been to a will reading—she had “always imagined that they would be a cross between mystery clichés and the scene in Middlemarch where Mr. Featherstone’s will is read.” Rachel is asked to catalog Bowen’s extensive library so that his main beneficiary, his son David, can “decide its fate.” She is to receive the book of her choice for undertaking this task. During the reading Rachel carefully monitors everyone’s reaction to their bequests—the former wife, the son, the current girlfriend, the young assistant—and what she sees confirms her belief that Bowen’s death was no accident.

Rachel decides it’s time to confer with Magda. The budding sleuths meet in restaurants, bars, and shopping galleries; Bernhard brings them all to life. Google their favorite establishment, Bistrot Vivienne, and there it is, complete with a four-star rating. Their dogged pursuit of the truth is fueled by coffee, tea, hot chocolate, and pastries, as they try not to freeze in the chilly month of January.

Bernhard’s homages to other authors are woven through the story. The literary references increase the pleasure of watching the partners doggedly pursue their theories, no matter how unlikely. Magda quotes Sherlock Holmes.

‘“When you have eliminated the impossible,’” Magda said in the voice she used for quotations, ‘“whatever remains, however improbable, must be the truth.’”

“But we haven’t eliminated the impossible,” Rachel pointed out, thinking that in any case Sherlock Holmes’s assertion was ridiculous. Many improbable solutions were unlikely to be true.

The death count mounts and Rachel and Magda’s amateur inquiries turn deadly serious. Watching them unravel minuscule clues is a testament to their doggedness, observation, and determination. Perhaps Magda isn’t too off-base when she says they could be “’like Holmes and Watson, or Commissario Brunetti and Vianello, or—or those other two—’” “’Nick and Nora Charles.’” Death in Paris is a classic mystery, set in a fascinating city: readers will look forward to Bernhard’s next Parisian-set story.