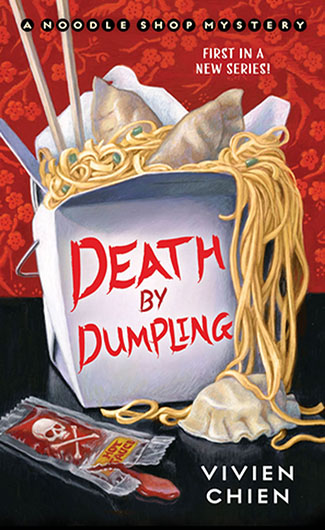 Death by Dumpling by Vivien Chien is the first book in the new Noodle Shop Mystery series (available March 27, 2018).

Take a visual tour of Death by Dumpling with GIFnotes!

Lana Lee is 27 years old and, after a cascade of poor life choices, has found herself working as a server in her family’s restaurant to make ends meet. Ho-Lee Noodle House is one of the most prosperous shops in Asia Village, a charming Asian-themed plaza located on the west side of Cleveland, Ohio. Asia Village is the brainchild and baby of Thomas Feng, the 50-something property owner with an allergy to shrimp so deadly that he carries an Epi-pen with him at all times. It seems like business as usual when Lana delivers a take-out order to Mr. Feng’s office after the cook who usually doubles as the delivery man begs off due to other pressing orders. Everyone at Ho-Lee Noodle House knows about the allergy, so Mr. Feng being found dead soon after seems like tragic happenstance—until the coroner rules that he died from a reaction to shrimp dumplings, with his Epi-pen nowhere to be found.

Lana is stunned to discover that she’s the prime suspect given that she was the last person to handle his food. She’s even more astonished when the death brings out not only the ugly side of some of her neighbors but also deep, dark secrets from Asia Village’s past. Unwilling to sit idly by while her character is besmirched, she proceeds to methodically investigate—despite the stern warnings of the detective in charge, the dreamy Adam Trudeau (and with a last name like that, I keep envisioning him as a certain good-looking Prime Minister. I don’t think anyone can blame me).

There were so many things to like about this Own Voices novel. It’s really great to read a cozy written from the perspective of an Asian-American woman, especially since it’s set so lovingly within a Chinatown-like enclave. Vivien Chien wryly highlights the pleasures and perils of being an Asian-American woman in the Midwest, especially one who is single and works for parents who may be overly concerned about her marital status.

After Ian Sung—Mr. Feng’s socially awkward younger business partner—asks Lana to meet him regarding a proposition that turns out to be more than strictly business, Lana’s mom is eager to learn more, never mind the fact that Detective Trudeau has shown up at the restaurant to ask Lana and her parents several follow-up questions:

“Lana, answer me,” my mother said, interrupting the detective. “What did he say?”

I huffed. “It’s nothing Mom. He asked me out to dinner.”

“What?” all three asked in unison.

“It’s no big deal, don’t make it a thing.” I could feel the redness spreading in my cheeks.

“Oh, Lana.” My mother beamed, clapping her hands together. “This is good for you. You need a boyfriend so you’re not lonely anymore. Ian Sung is perfect for you.”

Detective Trudeau scoffed in the background.

She waved her hand at me. “Forget about that. He will be an important man now. Maybe he will ask you to marry him and then you will own the plaza one day too.”

But Death by Dumpling isn’t just about solving mysteries while Asian. Ms. Chien has created a very relatable heroine in Lana Lee, who—like many other cozy heroines (and readers!)—is a voracious bibliophile. Determined not to be rushed into a relationship by her mom or anyone else, she seeks solace in the same way so many of us do, single or otherwise:

Instead of finding a boyfriend [as] instructed, I decided I would hit up the next best thing. The bookstore. I needed books to add to my “to be read” pile, and while I was there, I could question [the shopkeeper] about the day she found Mr. Feng’s body. Hopefully she would prove to be more informative than [the last person I’d spoken to].

As I stepped inside, I stopped and took a deep breath, closing my eyes and taking in the intoxicating smell that is the Modern Scroll. This was my favorite store of all. It was a small slice of heaven, and I came in any chance I got just to be around the books. Books were my solace, my escape.

Death by Dumpling is a promising debut in a market that often seems to be saturated with interchangeable heroines. Lana Lee stands out not just for her ethnicity but also in her resourcefulness, humor, and practical approach to investigation. I really enjoyed her relationship with her best friend and roommate, Megan, and I look forward to finding out more about both the romantic breakup and the workplace meltdown that brought her to this pass—two events that are alluded to in only the barest of sketches for this first entry in the series. Dreamy resemblances to a certain political figure aside, Detective Trudeau isn’t necessarily my favorite cozy mystery love interest, but I’m definitely interested in seeing how Lana’s relationship with him grows and am eagerly looking forward to the sequel.

Read an excerpt from Death by Dumpling!