Book Review: Death of an American Beauty by Mariah Fredericks 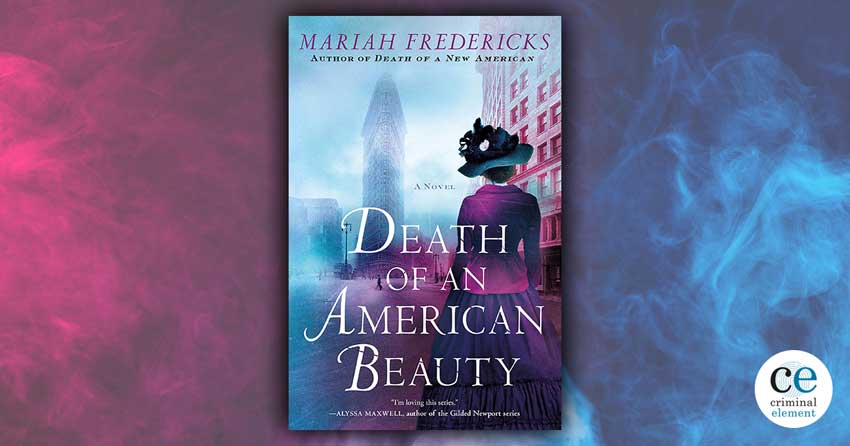 Death of an American Beauty by Mariah Fredericks is the third book in the compelling Jane Prescott series, set in Gilded Age New York, where the ladies’ maid is determined to discover who is making death into their own twisted art form.

Ladies’ maid Jane Prescott’s vacation doesn’t go quite according to plan. First, she’s conscripted into helping with the costuming for a Lincoln-themed theatrical involving her employer, Louise Tyler, to celebrate the 50th anniversary of the Emancipation Proclamation. Then, in a far more dire turn of events, one of the residents of her uncle’s female refuge is found brutally murdered in a fashion that reminds Jane of a similar attack on another former resident, an enigmatic woman named Otelia Brooks.

When another woman turns up dead in the same manner and a purity brigade that has long campaigned against the refuge points the finger of blame at her uncle, Jane becomes determined to uncover the true culprit. And something tells her the key lies with Otelia Brooks.

“I’m sorry, I must sound brattish and ungrateful. But I can’t help feeling somehow the killer’s already gotten away with it. Just by doing it. …They can’t ever get their… selves back. Their faces, they… I’m not making any sense. I just feel that’s why he did it.”

“To make them look like he wanted. Turn them into things. Good night, Officer. Thank you again. I hope I will see my uncle back here tomorrow?” Today, I thought. It was already today.

“I hope so, too, Miss Prescott. You let us handle this.”

“He’s the only family I have in the world, Officer Nolan. I don’t think I can do that.”

Gentle. Patronizing. I smiled politely. But he was wrong. There was something I could do.

I could find Otelia Brooks.

Jane’s investigation leads her from her childhood home in the East Side to the glittery finery of Rutherford’s, one of New York’s first glamorous department stores, and the seedy dangers of the Acme Café, a haunt of mobsters and prostitutes. She’s joined by old friend and newspaperman Michael Behan, the charming pianist Leo Hirschfield, and even the loquacious and rebellious socialite Emily Tyler as she tangles with the likes of the loathsome Bill Danvers and the crusading, Bible-toting purity brigade. There are stark contrasts between sordid criminality and rarified pageantry, and biting commentary on the cruel injustices of racism and misogyny—not to mention how the words of the wealthy have always carried more weight than those spoken by the servant class. In order to reveal a horrific monster, Jane will have to risk everything to make the world see the unvarnished truth.

Death of an American Beauty is the third of Fredericks’s mysteries to star Jane Prescott, and it’s proof that both writer and heroine are growing stronger and more polished with each installment. Jane is an increasingly complex and intriguing lady, fully embodying the turbulent, transitional time she lives in. She may still work as a ladies’ maid and abide by many of society’s traditional rules, but as the styles of dancing and modes of dress become more daring, as women begin to defiantly speak up and step out on their own, so, too, does Jane.

As I took the trolley uptown to Thirty-Eighth Street, I thought, A man’s home might be his castle, but for a woman, home was the only place she was promised a degree of protection and authority. According to the ideal, for a woman to venture beyond the home was to invite degradation, violence, and exposure to the sordid realities of life. Heavens, that was what servants were for.

So while men might go to their place of business, stop in at the club, walk down the streets, travel by public transport, dine in restaurants, or… well, live, women were well advised to stay indoors unless they were accompanied by men.

Then the first department store opened its doors, and women had a place to go that was, for all intents and purposes, theirs. In this “Adam-less Eden,” as Edward Filene called his Boston store, women could wander as they pleased, as long as they had money to spend.

For size and splendor, Rutherford’s surpassed all other department stores. One did not go there simply to shop; that would have been vulgar. No, one went to dream…

While the mystery itself—strongly reminiscent of Jack the Ripper’s spree—is a solid one, with enough twists and red herrings to keep us on our toes, the real draw here is Fredericks’s knack for drawing us back in time. Her rendition of 1913 New York is so tangible and vivid, we feel as though we’re walking the grimy streets alongside Jane within just a few pages.

Fredericks does a superb job of interweaving hard historical fact and settings—such as the 1913 Cubist art exhibit and early ragtime songs—with her fictional flourishes so seamlessly, it’s difficult to separate the two. Death of an American Beauty is sure to delight fans of compelling historical fiction.

And this isn’t a tale for the faint of heart; there’s plenty of horror, tragedy, and an action-packed climax that’s guaranteed to shock. Everything is ultimately wrapped up tautly with the stage nicely set for Jane’s next adventure—which, hopefully, won’t be long in coming.

Check out this Q&A with author Mariah Fredericks on her Jane Prescott series!