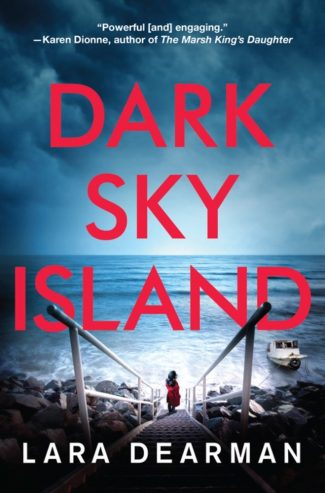 Dark Sky Island by Lara Dearman is the second Jennifer Dorey mystery, where an inspector and journalist join forces to uncover long-buried secrets, simmering resentments, and a chilling murder in a tiny, remote island in the English Channel.

I just love the concept of a dark sky island. Recently, I read a book that featured a dark sky park, and it provided the perfect setting for a mystery: insulated, creepy … dark. In the case of Dearman’s new mystery to feature Guernsey News Reporter Jenny Dorey, Dark Sky Island, the dark skies are over the tiny island of Sark, which is only about three miles long by a mile or so wide, with a population of only 450 souls.

When a skeleton is found in a cave on Derrible Bay, it sends the tiny island into a frenzy. Jenny gets a tip from her cousin Stephen, a police officer, and heads to Sark to get the scoop. Once the ferry drops her off, she rents a bike (the preferred way of getting around the island) and heads to the caves, which can be treacherous if you’re not careful.

The steps curved sharply to the right and Derrible in all its glory was revealed. The tide level was perfect, low enough to reveal a butter-coloured curve of sand but high enough that the water was still easily accessible, a short walk to an arc of almost impossibly bright blue. Behind, the cliffs—jagged ochre rock splashed with acid-green lichen and patches of sticky black tar. Gulls perched nervously in crevices, skittering back and forth, one then another taking flight, screeching and cawing before coming back to rest, hard yellow eyes fixed nervously on the unwanted activity below.

It looks like the bones might be that of a young woman. Jenny’s friend Guernsey DCI Michael Gilbert is there on the scene, and he’s annoyed but not surprised when Jenny shows up. They’ve got some history—in fact, Jenny is still recovering from a bullet wound from a previous case she was involved in.

‘I could have you arrested. There’s only so far being a local hero will get you, you know. You’ve not got some bloody carte bloody blanche to stick your nose into anything you feel like.’

He looked tired, she thought. More than that. Weary. The last time he’d come to the house, she’s sensed it too. The external investigation into the police force was taking its toll.

‘You can’t expect to keep something like this a secret.’

‘Hmph,’ he grunted, then sat on a damp rock with a deep sigh. She joined him. The pebbles beneath their feet were glossy.

‘And you know if you give me the story, I’ll at least write it up nicely. Proper grammar, full sentences.’

She saw the edges of his mouth twitch. He often complained about the quality of the writing in the News.

‘You’re bloody incorrigible, you are.’

Jenny is incorrigible, but she’s going to need every bit of that incorrigibility in the hours and days to come. Jenny barely gets back to the local pub before the news comes in that an eccentric local named Reg Carré has been killed. It’s gruesome—his throat has been cut, and it looks like a little boy named Arthur may have witnessed the crime. Jenny actually discovers him on her way to the crime scene, and one of his hands is soaked in blood. He’s not talking much, however, and as the days go by, his mother is hesitant for the police to question him, claiming he’s too traumatized. But he does say something about some sort of Beast. Creepy, huh?

This whole island is creepy, actually. The folks are tight-lipped, except for one young business owner who (sort of) befriends Jenny, and they seem generally terrified. I suppose that’s understandable since it’s such a tiny place and two bodies were just found in one day. Adding to the island’s problems is a billionaire who is trying to buy up much of the real estate out from under the island’s residents.

This book is packed with problems, actually. Michael’s police department is undergoing an investigation, so he’s shouldering a ton of stress. Jenny suspects Michel might have some info about her father’s death at sea two years prior, but he’s not saying. And, of course, there’s a killer running around. Things can’t get much worse for an island with a minimum of street lights, right?

I didn’t read the first book in this series, The Devil’s Claw, but I had no problem jumping into this one. There’s a lot going on, but Dearman is so skilled at setting up her characters (and catching up new readers) and building her wonderfully atmospheric setting, you’ll fall right in. You won’t be able to put it down until you turn the last page. I can’t wait for this author’s next mystery.