Review: The Dark Side of Town by Sasscer Hill 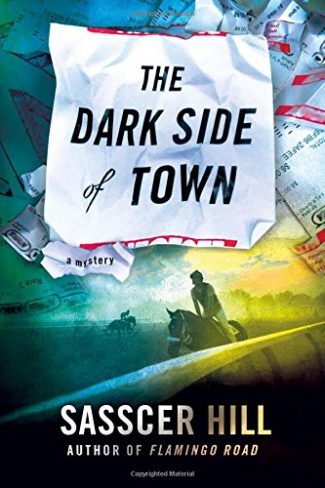 The Dark Side of Town

Undercover agent Fia McKee returns in The Dark Side of Town, another thrilling mystery by Sasscer Hill set in the seamy underbelly of horse racing.

Sasscer Hill’s sophomore Fia McKee racing mystery is set at Saratoga Race Course in New York State. McKee is still working for the Thoroughbred Racing Protective Bureau (TRPB). McKee was once a street cop in Baltimore, but she and her employer came to an uncomfortable parting. Her dad was a horse trainer, so McKee grew up around horses and racing. What makes her tick? Her passion to protect “the people and animals that make racing such a phenomenal sport.” Working for the TRPB, though, is not without risks.

I believed in the agency’s mission to protect the integrity of horse racing, but with the immense sums of money involved and the endless cash pouring into online betting outlets, we fought an uphill battle. The lowlifes that would do anything for money were never far away.

Fia McKee is not naïve; she’s not caught up in the dicey allure of the track. She has some of the native wisdom of comedian W. C. Fields: “Horse sense is the thing a horse has which keeps it from betting on people.” What “touches” her soul are animals and regular folks who bear the unintended consequences of cheating at the race track. Fia is so attuned to the high-spirited animals she tends that she is affected “emotionally” by “the game-on face of a racehorse determined to annihilate his competitors.” And by a young immigrant jockey who ate his gun before the predawn mist evaporates as well as the “frightened face of a man who just bet borrowed money and lost.”

Fia’s in Saratoga to investigate racehorse trainer Mars Pizutti at the request of the New York Racing Association (NYRA). Pizutti has a roster of dirty tricks, but he’s protected by powerful folks, even though he’s had “numerous infractions and suspensions.” The TRPB thinks Pizutti’s jockeys win “too many races,” and that too often, the fix is in before the horses leave the gate. Without getting down in the weeds of “body-building anabolic steroids,” it’s extremely difficult to monitor appropriate steroid levels because “they are naturally occurring and are present in low levels in most horses.” Sasscer Hill’s pithy prose conveys the dilemma facing those who attempt to keep racing honest.

NYRA had finally suffered enough and had solicited the TRPB to plant an agent in Pizutti’s barn.

Proving Pizutti’s perfidy would be enough—a chance to experience the “seamy underbelly” of racing, seeing an undercover operation take down a criminal—but The Dark Side of Town has a richer, more complex palette.

The racing world is a small one, so after the goings on in the Florida-set Flamingo Road (Fia McKee #1), Fia transforms herself into Goth Fay Mason, hot walker of horses: “After showering, I darkened my eyes with black shadow and liner, then pulled on a T-shirt with a graphic of bleeding red roses on the front.” Fia/Fay has the grungiest job in the stable—walking the horses, cleaning the filthy stalls—but it’s the ideal position to eavesdrop and unobtrusively take pictures. No one notices a gal with a dyed black, “gamine, pixie-style” haircut and skull earrings. No one, that is, but Calixto Coyune. Calixto is a law enforcement colleague with an abundance of charm, cash, and cojones. No pain to go along with his suggestion that they pretend to be interested in each other. Calixto’s wealth, courtesy of his wildly-successful, Cuban-born father, gives him entrée to restaurants and parties that are out of reach of a stable worker—bring on wigs and fabulous outfits as Calixto and Fia infiltrate the tight racing community.

Back to the early morning death of an immigrant jockey. Fia and her bosses suspect that Jose Fragoso, a young Peruvian who hadn’t been in the States long, committed suicide rather than submit to blackmail. Could the mob be behind it? The classic method of subverting races is to have a jockey throw a race. Fia overhears Pizutti threatening a promising young jockey, Stevie Davis, a kid who’s maybe “five foot three, if his socks were thick enough.” Pizutti doesn’t try to bribe Stevie; he threatens to hurt Stevie’s younger sister instead.

The aging mobsters who frequent Saratoga have a new scheme to part fools from their money: a racing hedge fund. It sounds too good to be true, but the allure of easy money is ever tempting. To Fia’s horror, she learns from her brother Patrick that her uber-wealthy, long-estranged mother is summering in Saratoga. Could she and her second husband be investors in the racing hedge fund?

Fia McKee juggles jockeys, mobsters, a scintillating Cuban-American colleague, and her conniving mother while the danger and body count rise. Saratoga, an aging beauty of a city, is the perfect setting for this complicated, occasionally crude, and compelling mystery.