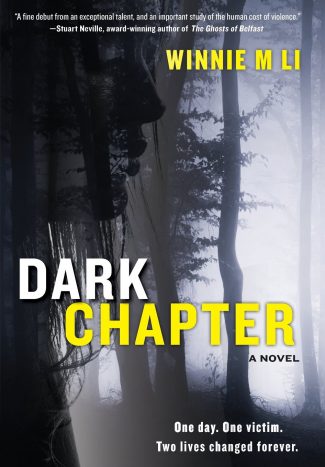 Inspired by true events, Dark Chapter by Winnie M. Li is both a literary masterpiece and a riveting novel of suspense about of the dark chapters and chance encounters that can irrevocably determine the shape of our lives.

It’s a good thing Dark Chapter is nominated for an Edgar Award for Best First Novel because I don’t think I would have come across it otherwise, which would be a shame because this book deserves a wide readership. It’s an excellent novel, suspenseful and full of tension. Rape is rather common in the mystery genre, but this is the first mystery novel I’ve read that focuses on the atrocity so intensely—why it happens, how it happens, and its aftermath—from both the victim’s and the perpetrator’s perspectives. Winnie M. Li is a writer with talent and compassion.

The story revolves around two main characters: Vivian and Johnny. The novel is broken into five parts. Rather than using chapters within these parts, each section tells Vivian’s and Johnny’s stories from alternating perspectives with only a line break separating their two experiences. Some of these sections are a few pages long, others are just a couple paragraphs or a few lines. This makes for a page-turning structure and a fast read.

Vivian is a Chinese-American from New Jersey currently living in London and pursuing a successful career. Her parents own a dry cleaning business and value education. Both of their daughters attended Harvard. Vivian has longed to travel since she was a little girl. Her first job after college is for a travel-guide publisher for whom she traveled the world on $45 a day.

Johnny is one of five or six kids from an Irish Traveller family. His dad is a violent alcoholic who regularly beats his wife in front of the children and often uses his fists on Johnny. His parents separate, and his Mom moves to Dublin with some of the kids. Johnny stays in Belfast with his Dad and older brother, Michael, who is a criminal. Michael teaches his younger brother how to steal and how to make it with girls.

Vivian is 29 and Johnny is 15 when their paths cross. Their lives both before and after their meeting unfold in detail throughout the story. Along the way, Li skillfully weaves in the familial and cultural traditions and prejudices that shape their lives.

Back in college, Vivian’s roommate thinks she’s nuts to want to travel on her own. Vivian explains the importance of traveling alone to her roommate:

“After all, isn’t that the whole point? Thoreau living in solitude, off in his cabin by Walden Pond. Walt Whitman waxing lyrical about leaves of grass, writing under a tree while his beard grew longer and shaggier with the passing seasons. Edward Abbey drifting down a vast canyon in the American Southwest, the rock walls rising on either side of him, just him and the canyon.”

Vivian was bitten by the travel bug prior to college, but her Harvard English classes obviously fed the desire. She’d wanted to travel alone since she was a little girl and stumbled upon Legends and Folktales of Ireland at her local Barnes & Noble. The cover drew her to the book: “there’s a circle of standing stones, a green hillside, a full moon. A path through the mist. A lone traveller walks on that path, past the standing stones, under the moonlight.”

And it’s not just solitary walks in nature that appeal to young Vivian. She is also taken in by Holden Caulfield’s 40-block solo walk late at night in New York City.

This desire of Vivian’s, one that she’s had since the age of eight, doesn’t exactly fit with the reality of being a woman exploring the world alone. She’s aware of the dangers for a woman traveler. Women out alone, after all, “get what they deserve,” as those of Johnny’s ilk reason.

We all know violence and rape is wrong. Yet one scene is reflective of how little society is willing to discuss it and how reactions to it get ingrained early on. In one childhood scene, Vivian is supposed to bring an article from the front page of the newspaper to her Current Events class. Her Dad reads the business section. Later she’ll devour the travel section, but for the class assignment, she chooses an article with the headline, “A woman’s naked, beaten body was discovered.” The boys in class laugh at this, and the teacher yells at Vivian for “choosing such a violent story.” It is moments like these that teach boys and girls how to react to violence against women. Boys can laugh, and girls aren’t supposed to talk about it.

Then, there are boys and men like Johnny who prey upon women. Li explores how one boy becomes an antisocial predator. A rapist.

Vivian had a scary encounter or two during her 10-plus years of solitary travel, but when she encounters awkward, teenage Johnny on a trail near Belfast, she isn’t prepared to deal with the explosive baggage that comes from his life experience.

Johnny’s life story is interesting, scary, and terribly sad. Violence and crime are all that he knows. As the youngest male of his group, he’s also the most vulnerable and therefore, perhaps, becomes the most vicious of the bunch as he matures.

His family is part of the Irish Traveller culture. These are families that live in mobile homes on the fringes of society, something like modern-day gypsies (“gypos” is a term Johnny uses). Li has a skillful grip on Irish speech patterns and slang; buffers, travellers, peelers, beour, sláinte, craic are just some of the terms I wrote down to look up. There’s never any doubt as to who is talking as you read along in this novel, even with only a line-break separating the voices.

This novel is part suspense, part social documentary, and part courtroom drama. It shows the cost of violence for all involved. It gives excruciating detail of what a woman has to endure after being raped—the police interview and collection of evidence, the medical examination, access to drugs to prevent pregnancy and STDs, dealing with her workplace, friends, family, therapy, follow-up interviews, dating, navigating sexual relationships, and if she’s “lucky,” enduring a trial to name a handful of the big things. Violation upon violation. And then there’s the psychological torment of why did I or didn’t I do X, Y, Z?

This is not a novel about answers but one that painstakingly shows what the experience of rape and its aftermath is like and what it does to those involved. It also shines a light on how sexual violence and the threat of it limits women and destroys dreams and ambitions. It also raises questions about the rights of individuals living on the edges of society. With the help of the #MeToo movement, this novel should find a wide readership. It is not an easy read, but it is important and groundbreaking.