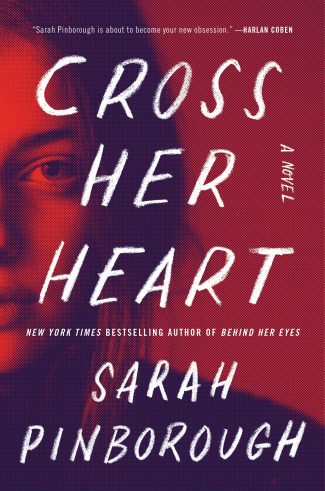 Cross Her Heart by Sarah Pinborough is a chilling psychological thriller about a dedicated single mom, her restless teenage daughter, and her troubled friends—about the secrets they hide, and the pasts they can’t escape.

If you read 2017’s utterly fantastic Behind Her Eyes, you know exactly what Sarah Pinborough is capable of. It’s a hard act to follow, but Cross Her Heart still packs a punch. Pinborough is a pro at getting inside her characters’ heads, not to mention making readers (at least this one) empathize with someone who’s done very bad things. Can people change profoundly? Even those that have done something terrible, like murder? If Lisa is any indication, then yes.

Lisa is a mom to 16-year-old Ava. They’ve always been close, but Lisa is overprotective. Ava chafes at her mother’s doting and is longing for freedom. Unfortunately, the promise of freedom comes via online, where she’s been communicating with an older man. Meanwhile, Lisa is lamenting the distance that’s grown between her and Ava, though her professional life is taking a turn for the better and a very attractive new client is even showing romantic interest in her.

It’s been a long time since Lisa has been afraid, but when she finds a stuffed toy that’s a blast from her past near her home, her fear is palpable.

It’s pitch-dark outside, no hint of a comforting grainy dawn gray yet, but I sit, wide awake, with my knees up under my chin and stare out at the bleak night, my stomach in terrible knots. It wasn’t Peter Rabbit. I know that. Peter Rabbit is long gone. It would be impossible for it to have been Peter Rabbit, the Peter Rabbit, but I want to run down to the recycle bins at the end of the road and root it out again to be sure. I take a deep breath. It’s not Peter Rabbit. It’s just a coincidence.

When I’d seen the soft toy out there in the rain, slumped dejectedly against Mrs. Goldman’s gate, my heart had almost stopped. It was grubby and sodden, dropped maybe hours before, but the bright blue trousers stood out against the graying white fur. It wasn’t the same bunny, that was clear when I’d picked it up with trembling hands and a scream trapped in my throat, but it was close.

It’s only the first in a string of events that convinces Lisa that her past might be catching up to her. She committed a terrible crime at the age of 11 and has been paying for it ever since. But the past 16 years with Ava have been largely good ones, and it’s only recently that she’s begun to think she might actually deserve to be happy. And she’ll do anything for Ava.

Cross Her Heart is told through the alternating perspectives of Ava, Lisa, and Lisa’s best friend and coworker, Marilyn. There are also flashbacks to Lisa’s heartbreaking childhood at the hands of her neglectful mother and physically abusive stepfather. It’s important that we get Marilyn’s view because when the crap really hits the fan, Lisa needs an ally. Marilyn, who has her own problems, must dig deep to find forgiveness for Lisa after she discovers the secret she’s been keeping about her past. When Ava goes missing after meeting her online crush, Lisa must confront the truth about her past to save the one thing she loves the most.

Pinborough is a very versatile writer, and she uses her considerable horror chops to build a sense of low, creeping dread while she cleverly throws out the breadcrumbs that lead to the shocking truth. Nothing is quite what it seems, and Lisa’s desire to be something else, something better, is a relatable one—even if most of us (hopefully) don’t have the kind of past that she does. If you haven’t discovered this super talented author yet, this razor-sharp tale of obsession and murder is a great place to start.