October 9, 2017
Cold Harbor by Matthew FitzSimmons is the third book in the Gibson Vaughn series, where Vaughn has finally been released from his hellish 18-month imprisonment and seeks revenge against his captor. 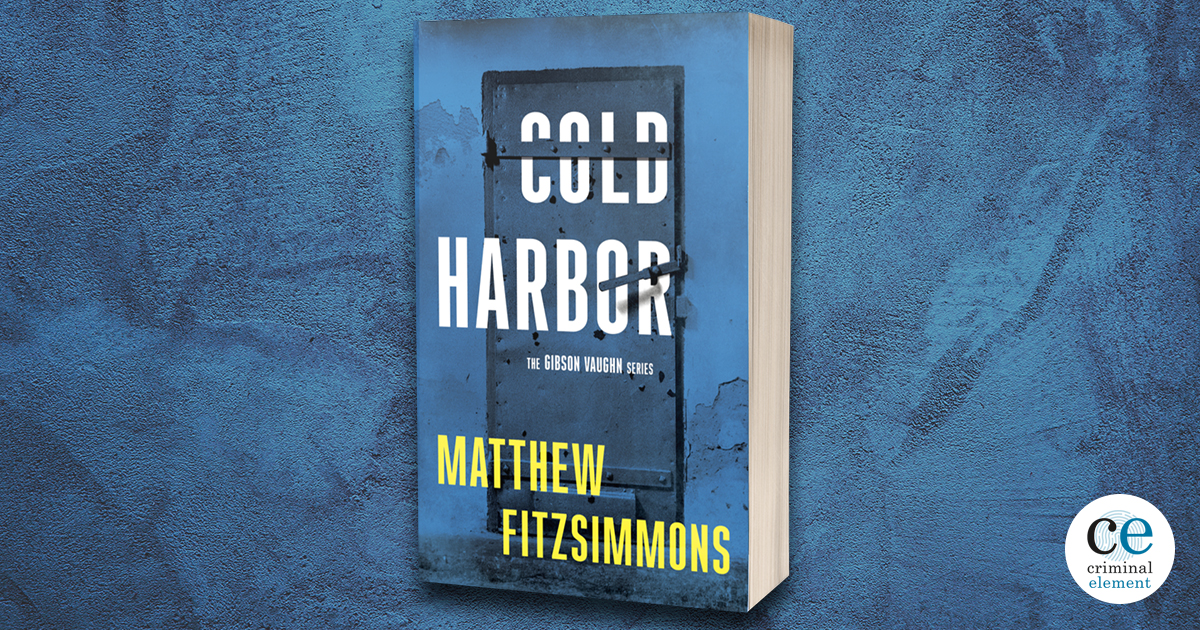 The immortal words of Edmund Dantès (The Count of Monte Cristo) come to mind while reading Cold Harbor: “What’s my crime? What’s my crime?” Why was former Marine and gifted hacker Gibson Vaughn locked up in a CIA black-site prison anyway? Dantès managed to keep track of the days, weeks, months, and years he was imprisoned, but Gibson Vaughan truly had no idea how much time had elapsed when he was finally released from the hellhole he’d been placed in. Adding insult to injury was the indignity of having to deal with a parole officer. Detective Bachmann interrogating him hit his personal wall, especially when Bachmann asked about Vaughn’s daughter Ellie.

The eighteen months he’d spent wondering if he’d ever be released had been hell, but it was nothing compared to the last twelve hours not knowing if Ellie were alive or dead. He didn’t know that he wanted the answer, but not knowing was the most dreadful purgatory he could imagine. Bachmann’s sneer was the proverbial last straw. Gibson snapped.

“Was anyone hurt?” he screamed, toggling from calm to rage in the blink of an eye. “Is my daughter safe, you fuck?”

Spittle flew across the table. Gibson’s chair hit the back wall as he surged at Bachmann, stopped only by the handcuffs.

Yes, Gibson Vaughn is feeling the rage. Cold Harbor unfolds along parallel tracks: Vaughn is driven by retribution—he’s determined to make the man who imprisoned him pay—but former colleagues and compatriots and enemies have other plans for Vaughn. Adding an extra layer of complexity, Vaughn is haunted by two ghosts: one of whom is his dead father. Ghosts who have no compunction about weighing in on every decision Vaughn makes.

A man who’s been MIA for 18 months needs help—help from “past tense” folks who are still among the living, like Dan Hendricks.

On impulse, he took out one of his new phones and dialed the last number he knew for Dan Hendricks.

Surprisingly, Hendricks picked up on the second ring. “Who’s this?”

There was a sizeable pause. “Is Tupac or Elvis with you?”

“Damn. Looks like I lost the dead pool. Where’ve you been?”

“It’s a long story. How are things? What have I missed.”

“You are kidding me.” Gibson wasn’t a Cubs fan, but he loved baseball, and it reminded him how out of touch he was with the world.

“You really didn’t know that?”

“Cubs took it in seven.”

“Chicago seemed to think so.”

Serious segue: if you were out of commission for 18 months, what would be the most important event that you’d be incredulous to have missed?

Gibson Vaughn, drawing on his undercover operative experience (and fueled by rage), kidnaps the man who threw him into 18 months of oblivion. Frontier justice. Cold Harbor interweaves two classic American tropes: the solitary prisoner, imprisoned for who knows what; and the American loner, determined to rectify the injustices perpetrated on him. It’s a page-turner that keeps the reader wondering—and looking forward to Gibson Vaughn #4.