Review: Too Close to Breathe by Olivia Kiernan 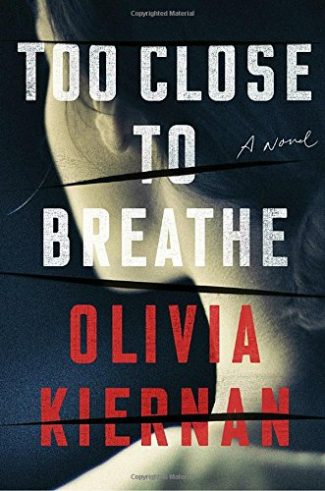 Too Close to Breathe

Olivia Kiernan’s tautly written debut novel, Too Close to Breathe, immerses readers in a chilling murder case—and the tantalizing, enigmatic victim at the center of it all.

Olivia Kiernan’s debut novel seamlessly juggles three concentric groups of characters. First, the victim: microbiologist and lecturer Eleanor Costello, who “is found hanging from a rope” inside her painfully tidy suburban Dublin home. The number of victims rises, enlarging this first circle. Eleanor’s neighbors, acquaintances, and university co-workers comprise the second group. Lastly, there are the investigators, led by Detective Chief Superintendent Frankie Sheehan. Sheehan is at the center of Too Close to Breathe—investigating Costello’s death tests her relationships with her colleagues even as she deals with ghosts from her Dublin childhood.

A resolutely dark, moody, and blunt tone is set from the beginning, occasionally leavened with ironic humor. Kieran opens with a reflection on Costello’s suicide.

There hadn’t been a suicide note. The victim remains resolutely tight-lipped, stone-cold silent; the best and worst witness of her end. A note would allow mourners to hold on to something. Assert blame. Be angry at what’s written. Tear the fucking thing up if they wanted. Without it, there is nothing.

But is there nothing? Perhaps a red flag is raised when there isn’t a suicide note. Could a murderer have staged a suicide so no one would suspect? Detective Chief Superintendent Frankie Sheehan is back on the job after a long medical leave of absence. Her backstory to understanding her modus operandi, but there’s no information dump—it’s parsimoniously dripped into the ongoing story. Sheehan watches a “narrow-faced pathologist” perform an autopsy on the body. Her boss, Assistant Commissioner Jack Clancy, is also in the room: “Whitehall. Dublin city’s state-of-the-art supermortuary.”

It’s not easy to come back. Nothing’s the same. Frankie’s crew is different. Why is that?

“We had to move some stuff around, Frankie. Your team, intimidated as they are, turn out to be as loyal as beaten dogs, but we don’t have another detective at your level to work with you.”

“I prefer to work alone,” I reply.

“The coroner had an uneasy feeling about this one,” he answers. He raises an eyebrow at the phrase “uneasy feeling.” “The commissioner is twitchy.”

Silence. There is a tang of bile at the back of my tongue.

Frankie talks tough, but the autopsy takes it out of her. The commissioner was right to feel twitchy. After she leaves the building, she heads down a side road to her car: “A good way down the driveway, breath seized in my chest, hands clinging to the case file like a lifeline, I stop, bend double, and throw up in a gutter.”

Solving Costello’s murder is Frankie’s “lifeline.” The autopsy uncovers long-ago broken bones, but the edges of a recent cut reveal an unusual material—a “specific shade of blue.” It’s Prussian blue, a shade of paint used for centuries, but significantly for the detectives, it’s poisonous, a known toxin. A thorough search of Costello’s house and, more particularly, her computer also hits the jackpot—someone accessed the Dark Web from it.

Frankie is firmly in command and determined to go where the evidence leads, even to the extent of infiltrating the Dark Web. A clearly upset member of her staff comes to her and asks her to look at an encrypted video on his computer.

“It’s come from a Dark Web user.” I say. “You’ve attended all our briefings, Inspector?”

“Well, then, pay fucking attention. You played it?”

A coldness runs across the back of my neck. “If so, Inspector, we’re about to witness our biggest piece of evidence. So hold onto your stomach and hit play.”

That’s good advice for readers of Too Close to Breathe. Olivia Kiernan’s debut novel in the Frankie Sheehan series is absorbing, occasionally stomach-curdling, and altogether fascinating. Throw in Dublin—where Frankie grew up—and the criminal attack she’s still recovering from, and therein lies a fascinating mélange with Kiernan skillfully interweaving the personal and the professional.