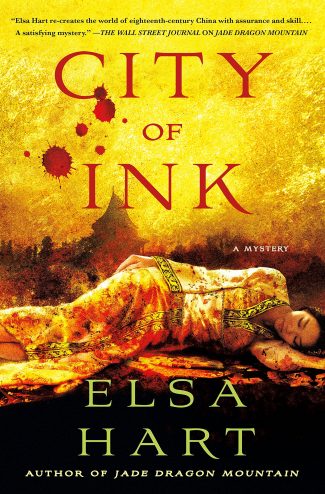 City of Ink by Elsa Hart is the third book in the Li Du series set in 18th-century China.

What begins as a seemingly straightforward crime of passion quickly tangles into a massive knot of government intrigue and personal danger in 18th-century Beijing. Li Du—erstwhile imperial librarian, former exile, and now lowly secretary in the North Borough Office—is required to assist Chief Inspector Sun as he investigates a double murder at the Black Tile Factory. An official from the Ministry of Rites, Pan Yongfa, and the factory owner’s beautiful wife, Madam Hong, have been found stabbed to death in the office. A scrap of poetry at the scene is all the proof anyone needs that this was a lovers’ meeting fatally interrupted.

Suspicion turns immediately to the cuckolded husband, Hong Wenbin. Surely he came upon his wife and Pan and killed them in a rage—all he needs do is confess and the law would protect him since his wife’s infidelity made him the true victim.

There are statutes to protect a husband. Li Du knew of the statute to which Sun referred, though crimes of that nature were rare among the wealthy. In his two years at the North Borough Office, Li Du had never needed to consult the violent crimes section of the penal code. Today, he had done so for the first time.

The provision appeared in Article 285. When a wife or concubine commits adultery, and her husband, or a close relative of her husband, catches her at the place and in the act of adultery, and immediately kills both, there will be no punishment.

But Hong insists on his innocence. Yes, he was drunk that night, but he came straight home. He loved his wife. He has no memory of stabbing her to death nor of cutting Pan’s throat.

And Li Du believes him. Something about the scene and that scrap of poetry doesn’t sit right with him.

The more he digs, the murkier everything becomes—until the investigation leads him down unexpected pathways: to government corruption, to foreign missionaries, to the impending examinations that will determine the future for thousands of Chinese subjects, and into Li Du’s own past and personal quest for answers.

City of Ink is, no exaggeration, a work of art. Elsa Hart has crafted a story that defies genre labels. It’s a mystery, yes, but this is no mere police procedural or political thriller—it’s both and neither.

It’s a character-driven personal drama, as the bookish and middle-aged Li Du proves that the bravest heroes don’t have to be muscle-bound action stars—they can also be quiet scholars willing to dare public execution to uncover long-hidden truths.

It’s also a meaty historical novel, richly researched and brought so vibrantly to life that 1700s Beijing is a major character in and of itself:

Under the hot sun, the muddy edges of puddles had become cracked and pale. Li Du had to move at a shuffle with pedestrians and riders packed between the balustrades of marble bridges. Sedan chairs, lacquered and decorated with swinging silk tassels, lumbered through the crowds, cotton robes clinging to the sweating shoulders of the sedan bearers.

A bright red spot amid the brown and gray clutter of leaves and mud caught his attention and made him stop. He stared at the tiny pool at the edge of the street, his thoughts suddenly saturated with the seeping color. His gaze shifted upwards to where the decapitated body of a rat dangled at knee height from a length of twine strung beside the door of a dumpling stall. The proprietor, following Li Du’s look, indicated a roughly painted sign about the little body. A warning to all rodents who conspire to enter my shop. He pointed invitingly at the dumplings sizzling in a pan. Li Du swallowed, shook his head, and hurried away. Feeling tired, he adjusted his hat and shifted his heavy satchel to a more comfortable place on his shoulders. It was the hour of the goat, and the day was far from over.

The more you read, the more you sink under Beijing’s claustrophobic spell until you half expect to look up and see Wu’s busy bookshop, the steamy noodle shops, the incense-scented temples, and the raucous opera district.

The plot has as many turns and blind alleyways as the labyrinthine city. Each new clue takes Li Du in unexpected directions, introducing new characters and shocking revelations. If you’ve grown frustrated with novels that are far too easy to predict, City of Ink is a perfect antidote to that jaded cynicism.

Hart does a splendid job of making the Far East and its people—so often reduced to stereotypes and shallow mysticism—solid and real. There’s color enough to be had in the real-world formalities and rituals, the strict hierarchies of class, and the irrepressibly eccentric ways of Li Du’s old friend, the storyteller Hamza.

The stakes are increasingly high for the central characters. The slightest mistake or careless word could mean death for entire families in a time of absolute imperial power. It’s difficult to do anything in secret in a place where thousands of guards watch at every gate, but Li Du must navigate shadowy pathways in his quest for the truth.

Hart skillfully builds the tension before delivering a wonderfully satisfying climax, one of the most enjoyable I’ve ever read—if we’re all very lucky, she’s already hard at work on the next chapter of Li Du’s story. Whether you love mystery, history, Chinese culture, or well-rounded characters, you need to read City of Ink.

Read an excerpt from City of Ink!