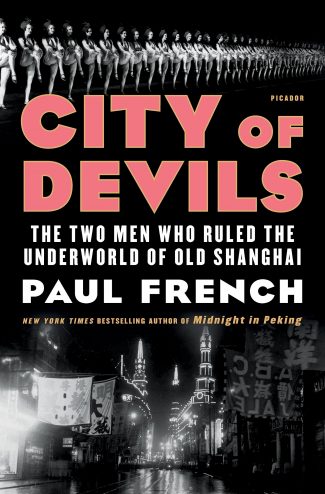 City of Devils by Paul French―the New York Times bestselling author of Midnight in Peking, winner of both the Edgar Award for Best Fact Crime and the CWA Gold Dagger for Non-Fiction―is the rags-to-riches tale of two self-made men set against a backdrop of crime and vice in the sprawling badlands of Shanghai.

Shanghai became a city of reinvention. It reinvented old China as something modern, glittering and golden, where a Chinese peasant didn’t have to chi ku, ‘eat bitterness’, as generations of their forebears had, but could grow rich and flourish. It transformed an unwanted orphan, born in a cold-water tenement in the American Midwest, on the run from a maximum-security prison, into a millionaire through slot machines, roulette wheels, and violence. It transformed a hungry and ambitious Jewish boy from the Vienna ghetto, dreaming of an escape from poverty, into a master impresario who created dazzling dance hall spectaculars with chorus lines that rivaled anything New York, London, or Paris could muster, alongside a casino empire such as the Far East had never seen before.

So begins the parallel stories of “Lucky” Jack Riley, the Slots King of Shanghai, and “Dapper” Joe Farren, the Ziegfeld of the East.

From 1930 to December of 1941—the Bombing of Pearl Harbor signaling all-out war across the world—Jack and Joe are the rulers of Shanghai: rich, admired, and riding high on a destructive wave of criminality. The Badlands is their home and playground; vice is their trade. Whether it’s gambling, girls, drink, or drugs, Jack and Joe have their fingers in every pie.

The Green Gang gone, the foreigners step in to play. These are the men with nowhere else to go, who are wanted pretty much everywhere, who have no letters of transit, passports, or exit visas. The exiled White Russians, the Jewish refugees, the desperate and the bad, those on the lam or AWOL marines now find the city’s vast empire of rackets dumped in their laps, gratis.

No evacuation ship for these people. Jack Riley, with his false name, fingertips, and a long-expired Chilean passport, cannot leave; Joe Farren has no desire to return to Nazi-controlled Jew-hating Vienna; Nellie, Nazedha, Sasha Vertinsky and all the rest of the White Russians fear Stalin’s gulags even more than the Kempeitai. These men and women will stay come what may—there are no visas for them, no refugee ships, no new homelands to welcome them.

This is where Joe Farren and Jack Riley will choose to stake their claim … to become the lords of misrule in Shanghai. Eternal outsiders both, they choose no-man’s land as their kingdom.

French’s powerful voice is perfectly suited to his subject matter. The omnipresent, hardboiled narration would be at home in any noir, and though this is nonfiction, the larger-than-life figures fall into nearly every trope of that genre. There are deadly dames aplenty—beautiful showgirls, desperate prostitutes, dangerous drug addicts, and mobster’s molls. Cutthroat racketeers who stack the odds in the house’s favor, pull razor blades during riots, and shrug when someone else takes the fall for their transgressions. Toadies and henchmen. Traitors and corrupt G-men.

None of the stars are innocent or kind—all are bad pennies to the core. But that doesn’t make their stories any less compelling. French spares none of the nitty-gritty about these (often short) lives, and yet they’re never caricatures. We never forget that these were actual people with a hundred motivations and dreams, and even when bad things happen to these baddies, we still empathize with them.

You wanna spend? Farren’s got eight crap tables, each with its own sticksman; sixteen blackjack, fifty slots, and three roulette wheels. You suggest they’re rigged, and Farren’s head of security, Wally Lunzer, will come over and acquaint your head with the Great Western Road flagstones. You want a marker? See Jack Riley. Short on cash and want to turn that emerald necklace into chips? Albert Rosenbaum will quote you a price.

And here’s the floor show: the Dani sisters looking all dark-eyed and lovely, harmonizing while the entrees are served. Joe and Nellie take to the floor and glide like old times, their disagreements put aside momentarily, Joe’s cheating temporarily forgotten. The crowd roars when they bow, the men stand and applaud, the old Red Rose wives dab their eyes. Nellie still looking as fabulous as she did at the Majestic in ’29. Then dancing, the band—Mike’s Music Masters of Swing, fresh in from playing at the Oost Java Club in Batavia, exclusive now to Farren’s. It’s everything Joe ever wanted.

The amount of research that went into City of Devils is staggering—and yet French’s prose is never dry. He has a singular knack for infusing hot, beating blood into men and women long dead, throwing us back into the wild and raucous parties of Shanghai’s Badlands. This reads like an adventure novel rather than the meticulous result of years of scholastic digging.

From the very introduction, you’ll be hooked. I honestly can’t remember the last time a work of nonfiction was so compelling and readable; I devoured half of the book before I came up for air.

What’s perhaps most astonishing—beyond Jack T. Riley’s theatrical exploits, besides Joe Farren’s life of glitter and glamour—is that a blockbuster movie centered on Lucky Jack and Dapper Joe hasn’t happened yet. They’re both so much, so daring and determined, that it’s as if they were made for Hollywood. But then again, one of French’s previous books, Midnight in Peking, will be getting the miniseries treatment soon. If there’s any justice in the world, it’ll only be a matter of time before we see City of Devils up in lights too.