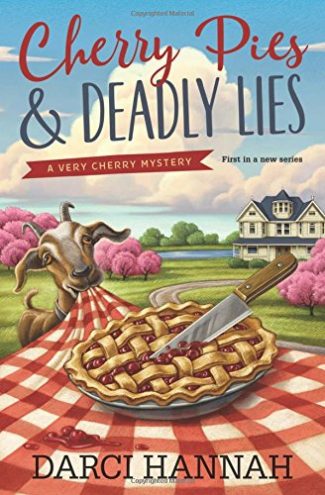 Darci Hannah’s first Very Cherry Mystery does for cherries what Forrest Gump’s Bubba Blue did for shrimp: “You can barbecue it, boil it, broil it, bake it, sauté it.” It’s a rare book that demands reading props, but Cherry Pies & Deadly Lies requires a bowl of cherries at your elbow, as you’ll definitely want to indulge.

Whitney Bloom grew up in Cherry Cove, Wisconsin, the daughter of the owners of the Cherry Orchard Inn and the Bloom family cherry orchard. The biggest event in town is the annual Cherry Blossom Festival. Whitney lives in Chicago, but her goal of making it big in the advertising business blew up in her face due to a massive viral mishap during the Super Bowl—her “funny” ad for a feminine care product was not universally well-received. She now runs Bloom and Cherries!, an online bakery selling delicious cherry confections out of her apartment. You can take the girl out of Cherry Cove, but there’s no escaping the family business.

In a last desperate attempt to get back her advertising job, Whitney sets up a street-friendly version of her website across from her old office building. It’s a “cherry-bedazzled” display.

My cherry arsenal was loaded and ready, bursting with cherry tarts, cherry squares, cherry scones, cherry cobblers and my pièce de résistance, deconstructed cherry pie. This was my own creation. It was a layered confection starting with a crisp, lightly sugared phyllo pastry crust, topped with a layer of sweet almond cream, tart cherries, brandied cherry glaze and toasted almonds. This layer was repeated, then topped with a dollop of fresh whipped cream and a perfect, plump cherry in a drizzle of glaze. It was pure mind-blowing, unadulterated taste-bud bliss! One bite and Mr. Black would forget I had ever made that ad.

Not only has Mr. Black not forgotten the infamous ad, Whitney’s mother calls her up out of the blue. Jeb Carlson, the long-time manager of the family orchard, is dead.

“Are you telling me that Jeb’s been murdered?—during the Cherry Blossom Festival Weekend? Is this your idea of a joke, Mom? Because it is, it’s a pretty sick one.”

Really, how could it be any worse?

“And the worst part is it appears that your dad is the murderer.”

That’s all it takes. If your family is in peril, you can go home again! Two aspects of Cherry Pies & Deadly Lies are very appealing: the town of Cherry Cove and its inhabitants as well as the love triangle that develops. What a shame Cherry Cove is fictional because it hits every tourist button. An “antique boutique, Cheery Pickers, Yoga in the Cove, Swenson’s,” serving up “the best ice cream, burgers and fries on the peninsula”—it has it all.

The love triangle is reminiscent of the Stephanie Plum series by Janet Evanovich. The local detective is Jack MacLaren, who used to be a “gangly, geeky, know-it-all boy, and the top student in our school.” She’s determined to investigate alongside Jack (and on her own, truth be told). “Holy cobbler!” thinks Whitney because Jack has cleaned up well—he’s now a “tall, trim, incredibly handsome, ginger-haired police officer.” Whitney is intrigued, but Jack isn’t the only game in town. Whitney’s high school ex-boyfriend Tate, aka Tatum Vander Hagen, is helping her parents as they cope with Jeb’s death. Tate is trouble, with his “arresting, Norse-god good looks” and “smiling, flashing dimples.”

I had worked hard to resist those captivating cheek-dimples but, for the love of cobbler, they were a powerful weapon. He knew it too, and yet seeing that I was still hesitant his smile faltered.

Readers will enjoy sinking their teeth into Cherry Pies & Deadly Lies. It’s a clever caper set in a delightful setting. Is Cherry Cove the new Cabot Cove? Whitney Bloom is a talented amateur detective, and the subplot of juggling two attractive men doesn’t hurt. The only caveat to recommending the first in an enjoyable series: “Holy cobbler,” where are the recipes?