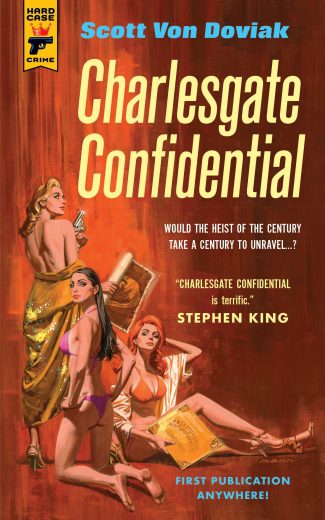 A breathtakingly clever, twist-filled narrative that moves from 1946 to 1988 to 2014 and back again, Charlesgate Confidential establishes Scott Von Doviak as a storyteller of the first order.

Hard Case Crime is known for delivering pulpy, entertaining narratives from some of the best authors crime fiction has to offer. Scott Von Doviak’s Charlesgate Confidential fits perfectly in their catalog, announcing the arrival of a new, exciting voice.

While Von Doviak has been writing for two decades—he’s written three nonfiction books and works as the television reviewer for The Onion’s AV Club—this is his first novel. Luckily for readers, it doesn’t feel like it. An expertly woven tale of robbery, death, investigation, and a series of intersecting lives that meet at the Charlesgate—a building who has been many things and is rumored to be haunted—Charlesgate Confidential is a funny, violent, baseball-infused novel that inhabits three different times and keeps readers guessing until the very end.

Back in 1946, a group of criminals pulled off the heist of the century when they stole a dozen paintings from the Boston museum. They were there because a previous hit had gone wrong, but they had a plan to make this one work for them. After leaving a few bodies behind, the thieves were caught. The art, however, was never found.

Forty years went by, and in 1988, the last surviving thief was released from prison and went looking for the loot. He dragged a young student into the ordeal in the process and exposed a lot of the secret history of the building that housed the stolen art, which remained lost even after the attempt at getting it back.

Finally, the year 2014 rolled around, and some of the college students who were there for the previous attempt are once again involved in a situation where the paintings are at the center of everything. This time around, someone else is after the paintings, and they seem to have no problem killing people to get what they want.

Charlesgate Confidential is what happens when storytelling skills meet a love for pulp and a knack for dialogue. Von Doviak knows what he’s doing, and the way this novel unfolds is proof of that. Between humor, pop culture references that place the reader in the time the stories are taking place, and an ability to let the characters move the story forward while also allowing newspaper articles to fill in some of the blanks, this narrative is fun to read and easy to follow despite the plethora of situations, subplots, and characters at hand. Also, the building itself is a character that stands in the middle of everything and remains mysterious as the world around and inside it changes:

Even if you don’t live here, you’ve probably heard the stories about Charlesgate the Emerson dormitory that houses nearly 400 students at the corner of Charlesgate East and Beacon Street. The architect who designed the building practiced black magic and committed suicide in the building. The famous playwright Eugene O’Neill also died within its walls. A little girl fell down an elevator shaft and her ghost still haunts the sixth floor. Ouija boards are strictly forbidden by the Emerson administration.

Every classic element of pulp is here, but they feel fresh because Von Doviak puts his own spin on them. His ability to juggle many characters at once is outstanding. Also, there are details that bring the three timelines together cohesively. The main two are the heist and the building itself. The stories tied to that act and that place are many, and they are all explored to a satisfying degree. In that regard, this 383-page novel reads more like a fast-paced novella. The alternating chapters also help to keep it moving at a high speed.

Not enough can be said about the small details that make this a great novel. One example is the underlying theme of baseball and the Red Sox. The team resides in the heart of that city and its residents, and that is present throughout the narrative. Also, the history of the building serves as a vehicle to explore the history of the city, its people, and even the country. A perfect example is the story told by Higgins, a detective working on one of the cases that appear in the novel:

“When I was a kid, this was the swankiest hotel in town. My mother took me here one day after shopping, just to walk around the lobby and look at all the fucking rich people. But the Depression came, and this place just went to hell. Couple years back, I got called here on a double. Guy had beat a whore damn near to death, but not quite. As he’s walking out of the room, she pulls a snub-nosed Smith & Wesson from the night table drawer, plugs him six times in the back. That’s about all she had left. By the time the ambulance got here, she’d died of her injuries. You never saw a case closed faster. They killed each other and they were both dead. But on my way out of here, I got stuck in the elevator. And I hear these … sounds coming down the elevator shaft, like a coyote or something. Then the lights go out. For maybe three or four minutes I’m crouched in the corner of the elevator with my gun drawn, listening to these howls in the dark. Then just like that, it’s all over. Lights come on, the howling stops, elevator brings me back down to the lobby, and I got the fuck out of here in a hurry.”

Entertaining, humorous, and packed with snappy dialogue, Charlesgate Confidential is a superb addition to Hard Case Crime’s catalog and a recommended read that proves pulp is alive and as good as ever.