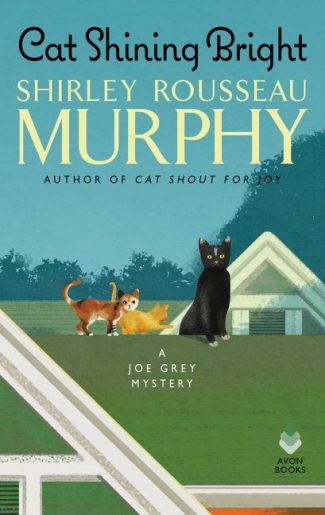 Cat Shining Bright by Shirley Rousseau Murphy is the 20th book in the Joe Grey mystery series, where the stakes are higher and more personal than ever for feline investigator Joe Grey, as death comes to his beloved coastal California town (available August 15, 2017).

In the 20th book in the Joe Grey mystery series, Joe becomes a father! His beloved Dulcie has given birth to three darling kittens—soon named Striker, Buffin, and Courtney—bringing joy to both the cats and to their loving circle of humans. But a string of car break-ins and thefts soon has the residents of Molena Point in an uproar, as a sophisticated gang of car thieves descends upon the town with the onset of a hurricane-force storm.

Joe and his feline friends Kit and Pan are in the thick of it, assisting their humans in the investigation. Most of those humans are, after all, either part of or related to local law enforcement, and this isn’t the first time the cats have been involved. It is, however, a new experience for Dulcie to stay home with her first litter of kittens instead of out helping Joe; this passage is wistfully reminiscent of the feelings of human mothers of newborns:

These last weeks, life had been so peaceful, nesting with the kittens, training them, reading to them, seeing them grow day by day to develop his or her own unique habits and interests; no crimes to distract her, no worries about Joe out in the night stalking thieves—until now. Now she began to fret. Life beyond the cottage began to push at her; she longed suddenly to run with Joe across nighttime roofs hunting the bad guys. She was torn sharply between the excitement of the hunt, and the security of snuggling and caring for their bright and riotous kittens, safe in their peaceful cottage.

Things get worse when a face from Dulcie’s housemate’s past begins to show up at unexpected hours around their cottage. Wilma was once a parole officer, and the figure that she and the cats have seen is eerily reminiscent of a murderer Wilma knew from decades past. Then, a local beautician is killed along with her early morning client, and Joe and Dulcie have to balance protecting their young family with ensuring that the criminals menacing Molena Point are brought to justice.

When I picked up this book for review, I assumed it would be much like other books with cat investigators, where the cats would subtly guide their humans to murder weapons and suspects, etc. I did not realize that the cats in Cat Shining Bright actually talk. Termed “speaking cats,” Joe, Dulcie, their family and feline friends are all related to a reclusive nearby tribe of feral cats that can all speak English as well as humans can.

This actually got me very excited, as I still remember reading Paul Gallico’s Jennie as a teenager and crying buckets at that book of talking cats. Now, imagine that wrapped up in a murder mystery—how delightful!

Twenty books into the series, of course, there is a large cast of characters navigating the various narrative threads Shirley Rousseau Murphy has woven together here. The present-day mysteries are also tangled together with questions from the past, including the existence of a unique book created in 1862 by the artist and writer Thomas Bewick that could hold the key to at least one of the criminal acts detailed in these pages:

Later when Wilma researched through all the collectors’ and libraries’ lists of ancient books, through all the sources she could find, there was no hint of this unique, single volume. She didn’t understand why Bewick had produced that copy. He had to know how dangerous any printed word was for the safety of the cats he had so admired—someone who loved the speaking cats should be committed to keeping their secret. Had Bewick let his urge to tell such a wondrous tale, to produce just the one volume with its beautiful woodcuts, override his concern for the cats themselves?

Fans of the series will love how Ms. Murphy continues to explore the mystical nature of the cats and their heritage, intertwining these investigations with the more mundane human mysteries of theft and murder. While Book 20 likely isn’t the best jumping-on point for new readers, it is definitely the kind of book that will be appreciated by cat fanciers, mystery-lovers, or otherwise.