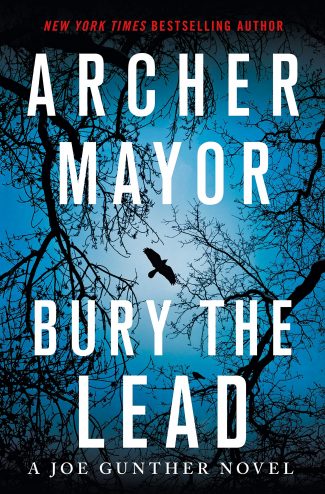 Bury the Lead by Archer Mayor is the 29th book in the Joe Gunther series, where Gunther and the VBI team are investigating a murder and an arson case―both potentially related to an outbreak of Ebola.

The lead or the lede?

It is this question that opens Bury the Lead, the latest Joe Gunther novel by author Archer Mayor. Mayor actually spends a few paragraphs educating readers about the etymology of the term “bury the lead.” He speaks to the complex method he utilizes to explain how the “lead” in his novels is often elusive. Mayor alerts readers to the fact that appearances in his novel and the investigation within may be elusive and that the lead may be buried for a reason.

The latest case to hit the desk of Detective Joe Gunther and the Vermont Bureau of Investigation involves the dead body of a young woman found just off a trail of one of Vermont’s most popular ski locations. The Jane Doe turns out to be a young woman by the name of Teri Parker. There are two major details taken from the forensics gathered—she was killed by a significant blow to the back of her head and was pregnant at the time of her murder.

A local low-life by the name of Mick Durocher cops to the murder, indicating that he hit her with a two-by-four following an argument. He “borrowed” a four-wheel truck from a man named Thurley and allegedly drove with Teri Parker after a stint at a local pub, parking it at the Bromley Ski Resort where he bludgeoned her with a two-by-four and left her body where it fell. Gunther and his team—specifically Sam and Willy, who help out from the forensic side—cut holes straight through Durocher’s confession, leaving Gunther and his fellow investigators to continue looking for the true murderer of Teri Parker.

When Sam informs Gunther that she is seeking to teach a college course in pathology, he accuses her of “burying the lead” by not coming out and indicating she would be leaving behind her work with the Medical Examiner’s Office. Either way, he has her and her team at least until this case is solved. Without much to go on, the VBI searches valiantly to uncover who killed Teri Parker and why. They also recognize that, with a fetus involved, they are looking at a double-homicide charge.

Clues lead them in the direction of a grocery supply company by the name of GreenField. Ties are also made to Mick Durocher’s estranged daughter Amanda, who had recently been named along with her daughter as the main recipients of Durocher’s will. The common link remains GreenField. The trouble is validating a connection to what now looks like a string of murdered young women to a company that someone appears to be attempting to sabotage.

GreenField is a private, family-owned company run by the Beaupre family. Gunther and company first speak with one of the sons, Bobby Beaupre, who on the surface looks like the perfect candidate for the killer of young women they seek as well as potentially being the saboteur of his own family’s business.

Archer Mayor, who has been writing Gunther/VBI novels for decades, has an easy and smooth style to his prose. This allows him to perform acts of literary sleight-of-hand that will always keep readers guessing. When a potential outbreak of Ebola is feared, things really ramp up. The result is a slow-burning pot-boiler of a novel that will keep you on the edge of your seat and fully engaged until the final reveal.

Read an excerpt from Bury the Lead!