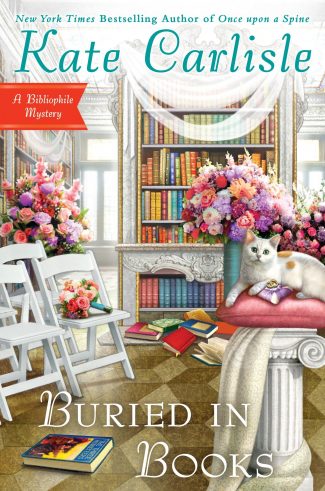 Buried in Books by Kate Carlisle is the 12th book in the Bibliophile Mystery series, where matrimony and murder collide as San Francisco book-restoration expert Brooklyn Wainwright walks down the aisle.

Buried in Books bubbles over with Bs: a bride, books aplenty, bookbinding, a body, and the beautiful Bay area. Kate Carlisle’s 12th Bibliophile Mystery operates on two interwoven tracks—the personal and the professional. Book-restoration expert Brooklyn Wainwright has chosen to spend the week leading up to her wedding to Derek Stone at a conference in San Francisco. Not as a participant but as a presenter.

For the fifth year in a row, I had been asked to present the bookbinding workshop for the annual National Librarians Association conference. It was a real honor to be asked because there had to be hundreds of talented bookbinders among the librarians who attended every year.

Can any bride be so organized? Brooklyn already has her bag packed for her honeymoon in Paris! A fly in the ointment comes in the form of some ghoulish attendees who want her “to dish about the murders during the workshop.” Seriously? How rude. Just because books and solving related murders were seemingly her modus operandi:

When it came to any connection between rare books and murder, the only bit of information I was willing to offer was this: If you thought that books weren’t worth killing for, you were dead wrong.

To an audience of librarians and “book nerds,” the allure of one of their own dishing on murders as well as rare books is an irresistible combination. Maybe so, but in Brooklyn’s mind, “I didn’t even like thinking about the bodies I’d stumbled across, let alone using them as filler in my workshop program. It wasn’t going to happen.”

Who should Brooklyn run into during registration but Heather Babcock, one of her two best friends from graduate school. Back in the day, Brooklyn, Heather, and Sara Martin (the third member of the trio) dubbed themselves the Three Musketeers. Unfortunately, a man came between Heather and Sara, and their friendship shattered. Brooklyn and Heather laugh and talk as they catch up over café lattes and biscotti, but 12 years have passed since they’ve spoken. All because of Roderick, Heather’s boyfriend, who had cheated on her with Sara. Is there still a “big fat bitchy elephant in the room?” Is Heather still angry?

I frowned. “Do you think she’ll be coming to the conference?”

“I sure hope not,” Heather said. Her jaw tightened and her eyes narrowed in unrepressed fury. “Because I swear, if I ever see Sara Martin again, I’ll kill her.”

Brooklyn can’t get that furious statement out of her head. “I’ll kill her” ricochets through her brain as she walks four blocks home to her fantastic flat, south of Market, close enough to walk to AT&T Park, the home of the SF Giants. The icing on the cake, though, is Derek, her “gorgeous fiancé,” who is waiting for her at home, eager to discuss the signature cocktails for their wedding. Derek is a Renaissance man: mixology is but one of his talents when he’s moonlighting from “his top secret job at M16, England’s mysterious intelligence agency.” Who better for Brooklyn? The lead up to their nuptials was solving bookish murders together. But Derek senses Brooklyn is troubled:

“You seem a little stressed.”

“Not a bit.” He regarded at me for a long moment, then frowned. “But something happened to you, I can tell. Was it at the conference?”

I blinked and shook my hair back. How did he do that? Not that I minded him being able to gauge my every emotion and thought by osmosis, but it was disconcerting nonetheless.

Brooklyn spills the beans on what happened years ago. Neither she nor Derek are surprised when Sara shows up at the conference, husband Rod in tow. Both Heather and Sara are invited to Brooklyn’s surprise wedding shower where they each give her a book. Sara’s is especially meaningful, a rare first edition of The Three Musketeers worth over $74,000. Except, it’s a forgery, as Brooklyn discovers. Even non-bibliophiles will be fascinated by the details of Brooklyn’s rare book chops. Old books speak to her.

I heard them calling my name. The severed hinge, the shredded headband, the faded gilding. They whispered, Help us Brooklyn Wainwright, you’re our only hope.

I felt their pain. Really. I didn’t make this stuff up.

When Sara Martin’s body is discovered, literally “buried in books,” Brooklyn’s intuition married with Derek’s investigative skills combine to solve the murder, all the while counting down to their wedding.

Will they make it to the ceremony alive? Turn the exciting pages of Carlisle’s Buried in Books to find out. Surely no one will blame fans for wondering if Paris will be a serene honeymoon location for two people who are a magnet for literary mayhem and murder!