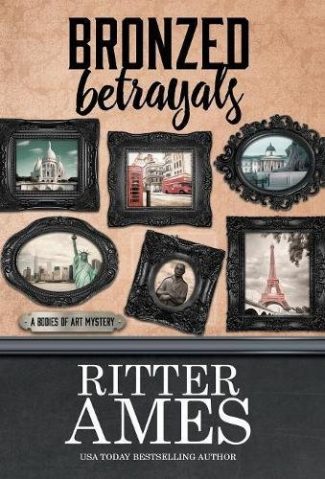 Bronzed Betrayals by Ritter Ames is the fifth globetrotting adventure in the fast-paced Bodies of Art Mystery series.

This fifth installment in Ritter Ames’s exciting Bodies of Art Mystery series is filled with fast-paced action, intrigue, multiple global settings, and a great cast of characters, and main character Laurel Beacham, once again, finds herself embroiled in a mystery surrounding art forgeries along with murder. Laurel is chasing answers to an older mystery as she navigates a completely new situation when an old acquaintance ends up murdered in her hotel suite. Given Laurel’s unique day job as an art thief to art thieves, it’s a clue that not much will be traditional, which keeps this an exciting and edge-of-your-seat read. But it’s not just that Laurel’s found a dead person in her room—it goes a step further, as we see here:

Then she asked the bombshell questions. “But did you not notice your luggage was already gone last night? Or didn’t you look?”

I was in mid-stride, heading toward the front desk and suddenly my legs didn’t feel strong enough to support me much farther. I hurried to a chair, and Cassie followed at my heels, close enough that I could whisper, “Omigod, my luggage still sat grouped in the bedroom when I was in the suite with Melanie. I distinctly remember seeing the packed bags when I came out of my closet after grabbing my gadget case and Prada purse. But I’d heard the police sirens and panicked, walking past the luggage because I wanted to be able to move quickly.”

Cassie made a kind of strangled sound, then asked, “You know what that means, don’t you?”

Nodding, I didn’t trust myself to speak, but internally I was screaming—Hell, yes! It meant I was in the room with a murderer who left right behind me with my luggage.

There’s plenty of old storylines at play here, but Ames provides enough backstory to keep even new readers abreast of what was going on. However, some of the information is pretty dense, and I sometimes found it hard to keep up. Still, the story was enjoyable and kept me reading in efforts to piece together the mystery.

I really loved the bits about the different art pieces. Ames’s knowledge on the subject shows. Her love and reverence for art are especially apparent in these passages:

I happily forgot for the moment everything that happened the previous evening and took in Van Gogh’s genius. Nothing like sunny art for a drizzly day.

He painted this series in early fall, 1888. Originally, the artist planned a full dozen panels to decorate Gauguin’s room in the Yellow House in Arles, but ultimately just four were completed in his goal. Gauguin and Van Gogh parted company after only nine tumultuous weeks of trying to form their artistic community, the “Studio of the South.” A fifth painting, a replication of this London work, was completed in January 1889 at Gauguin’s request, about six months before Van Gogh’s death. That fifth painting, experts believe, is the copy hanging in the Van Gogh Museum in Amsterdam. The two men were ill-suited in this artistic partnership and living situation, but Gauguin knew the sunflowers were Van Gogh’s seminal work and continued to say so. When he returned to Paris, leaving Arles only a few months after he’d arrived, he asked Van Gogh to send the copy for him to keep.

The sunny yellow painting I gazed upon, with its bright blue ‘Vincent’ painted on the vase, was purchased for the National Gallery in 1924 through proceeds from the Courtauld Fund. This was why I did what I did. From finding lost art, to helping museums raise money to fund the acquisition of great works to offer free to the public, it made me continually count my lucky stars I could play even a small role in this type of good work.

I remembered seeing the painting as a child with Grandmamma and having to keep my hands behind my back so I wouldn’t risk touching any of the exquisite works in the gallery. Even to this day, my fingers itched to touch the dying flowers, created on the canvas with Van Gogh’s thick brushstrokes and heavy layers of paint, a process known as impasto, building up the texture of the seed heads. In August 1888, when he was in the middle of this painting, he wrote to his brother Theo, “I am hard at it, painting with the enthusiasm of a Marseillaise eating bouillabaisse.” I totally got that.

Laurel and Jack’s relationship is strong. The way Laurel understands Jack through his body language alone shows its depth, which creates a foundation for the story as the serious and sometimes deadly actions happen around them. It all circles around the way they rely on each other and work as a team both professionally and romantically. I really enjoyed their scenes together as they played upon each other’s combined strengths.

Readers of the series will find this a wonderful addition, no doubt. If you haven’t read any of the series, I recommend starting at the beginning with Counterfeit Conspiracies. Ames ends the story with an appropriately explosive cliffhanger to keep you wanting more. It’s a fun read with a fast story to keep you reading through the night!