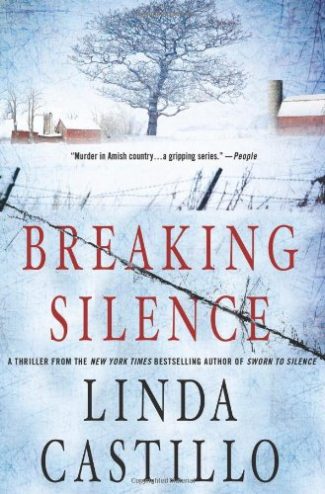 Breaking Silence by Linda Castillo is the third book in the Kate Burkholder series, where Police Chief Kate Burkholder is called to the scene of a horrific tragedy on a peaceful Amish farm.

Breaking Silence is the third book in Linda Castillo’s series featuring Painter’s Creek, Ohio, Police Chief Kate Burkholder, and it’s a doozy. It’s also my first read in this series—though it won’t be my last. In this installment, the trouble starts with the senseless slaying of an Amish woman’s livestock, and boy does it get worse from there. Kate gets a 5 a.m. call informing her that three people are in a manure pit out at the Slabaugh farm. It’s a dangerous situation because being down in that pit with the muck and the fumes that result from it can be fatal, so Kate’s in a race against time. When she arrives, she’s met by four very terrified children—the oldest of which is 17—and the situation doesn’t look good.

“How long have they been down there?” I snap.

The eldest male looks to be about seventeen years old. His terrified eyes find mine. “I don’t know. Ten minutes.” He says the words through chattering teeth. His face is the color of paste. He wears trousers with suspenders. The knees are wet with muck.

I shove my finger at him. “Open every door and window in this barn right now. Do you understand? Get some air in here.”

I shine my light into the hole again. There are two male victims and one female. I can tell by their clothing that they’re Amish. The two men are facedown. Too late for them, I think. The woman is faceup. Still alive, maybe. “We’re coming down to get you!” I shout. “Can you hear me?”

None of the victims stirs.

The ambulance hasn’t arrived, and it’s up to Kate to act at her own peril. They manage to haul the woman out of the pit, but she’s obviously dead, and the two men are too. It’s a horrific scene, and Kate is worried about the four children, who have now lost both their mother and father but also their uncle.

I look down at the victim. Filmy eyes stare back at me, and in that instant I know she’s gone. The realization makes me want to slam my fist against the concrete. In the smoggy haze of my thoughts, I’m aware of the teenage boy coming up beside me, looking down at his mother. I hear the girl crying nearby. Another child falls to his knees, screaming for his mamm. That’s when it hits me that these kids are alone.

Kate must then take on the heartbreaking job of interviewing the children, and all clues, plus the children’s statements, point to a horrible accident—that is until Kate has a chat with the medical examiner. Doc Coblentz points out a contusion on Solomon Slabaugh’s head that he believes was not caused by the fall into the manure pit. In fact, he thinks it was caused by blunt-force trauma. He also reveals that he has broken fingers, which he thinks came from someone striking them while he was hanging from the side of the pit. It’s a horrifying scenario, and Kate knows that getting to the bottom of these events won’t be easy.

She has good reason to be worried: the Amish are notoriously secretive and distrustful of outsiders. But Kate is no ordinary police chief. She used to be Amish, and it gives her a rare insider’s perspective into a very secretive world. Could the murders have been perpetrated by the people that have been committing a series of Amish hate crimes, or is it something else? Kate’s insight into the Amish gives her a big advantage, but she has a few biases that may keep her from seeing the truth, and she’s pretty self-aware of that. Luckily, she has the help of her boyfriend and Bureau of Criminal Identification and Investigation agent, John Tomasetti. I love the tentative interplay between them, and this installment takes their relationship to a new level over the course of the investigation.

“How are you, Kate?” His voice is deep and intimate, and I feel the rumble of it all the way to my stomach.

“I’m good.” I look at him. John Tomasetti has a powerful presence. Even more so from my perspective, because my feelings for him are fervent. We’re close, but sometimes I sense some unexplained chasm between us, unmapped territory, which feels vast tonight. “You could have told me you were coming.”

He smiles. “You mean warned you?”

Their evolving romance is one of the best things about this book. They’re both damaged: Tomasetti lost his entire family—including his little girls—sometime back, and Kate still wrestles with the events that led to her leaving the Amish community. But don’t let the word “romance” scare you off. This is not a romance novel, folks. It may take place amidst the bucolic Amish farms of Ohio, but it’s just as gritty as the grittiest police procedurals on the market right now.

Kate is one of the most unique heroines I’ve had the pleasure to get to know. The twist in this one will make your head spin. Breaking Silence is an effective meditation on family and the secrets they keep from each other, not to mention a study of what leads someone to murder. You should get to know Kate, ASAP. You can easily start with this book, but why would you want to when you can start at Sworn to Silence and binge your way through?

Read an excerpt from Breaking Silence!