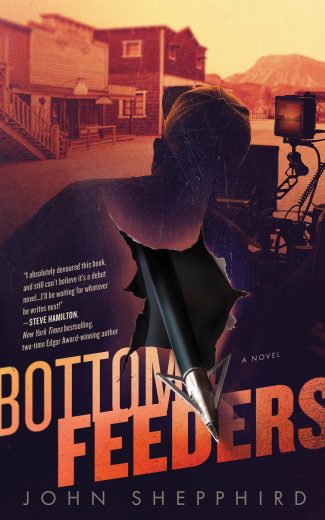 A page-turning whodunit set in the wilds of a remote movie ranch, Bottom Feeders by John Shepphird describes the hapless Hollywood cast and crew that eke out a living working on low-budget fare.

The biographical information on the back of John Shepphird’s Bottom Feeders states that the author is the director of nine feature films and hours of television. His credits include Teenage Bonnie and Klepto Clyde, Chupacabra Terror, and the Syfy Channel’s Jersey Shore Shark Attack. None of these sound like cinematic masterpieces, but I don’t mention them to mock them. What they tell us is that Shepphird, over many years, has come to know the world of low-budget Hollywood filmmaking well, and he uses this knowledge to full advantage in Bottom Feeders, his debut novel. It’s a murder mystery set on the location of a barebones TV movie, and it reads a little bit like a cross between an Agatha Christie-type story and something you’d see late at night, when in the mood for something fun, on cable television.

The plot construction is straightforward, effective, and the stuff of classic mystery. Gather an eclectic group of individuals, each with his or her own fears, ambitions, quirks, and psychological baggage. Place them in an isolated spot. Have unexpected events happen, upsetting everybody, throwing the various people off balance. As tensions and suspicions rise, full-blown criminal mayhem erupts, and for a while at least, everyone present will be a suspect.

Eddie Lyons is the central character. He’s a down-and-somewhat-out director who has been summoned to a meeting with the enterprising film producer Sam Carver. Sam wants Eddie to come in on short notice and direct a TV Western Sam is preparing. The director first slated for the project pulled out because of alleged “creative differences.” Made for the Majestic Channel—a woman’s channel not dissimilar to Lifetime—the movie will be a “Doctor Quinn Medicine Woman sorta deal” and will have the aging former film star Tami Romans in the lead role. Eddie and Sam have worked together before, so they are comfortable with each other. And though Eddie is a lonely guy pushing middle-age who drinks too much, he is no self-pitying depressive. He’s not exactly where he wants to be in life—no one goes into movies to wind up churning out product for the Majestic Channel—but underneath it all, he has a gritty spirit and realistic attitude:

As much as he regretted it, tight production schedules were Eddie’s specialty. He’d built a reputation of getting the job done always on time and under budget. Long ago he’d come to terms with the fact that he would never be recognized as an artist. He’d be known as a journeyman TV craftsman experienced in working with limited resources. “Laying pipe,” was often how he described what he did as a director. It beat working in an office for a living.

In alternating chapters, with clarity and speed, Shepphird introduces his other major players: a young woman who will be the cameraman’s assistant and an aging actor with a large ego who mainly teaches acting now for a living. Eddie, these two, and everyone else involved in the shoot assemble on location, and where else could this be than an old Western set, the Crescent Movie Ranch, “up in the mountains”? It’s a place, Sam tells Eddie, that Disney recently used, and the sets there look great. Of course, as a reader, when you hear that it’s so far up in the mountains, cell phone coverage is impossible, you fear the worst. For the isolated country house, Shepphird gives us the remote movie set, and the recognition of what he’s doing—the obvious playfulness he employs—made me smile.

I smiled often during this book. Shepphird has a light touch, even when someone starts shooting lethal arrows at the movie’s cast and crew. He captures the vanities, pretensions, rivalries, and insecurities of all the film’s participants. You have gossip and backbiting. You have people pretending to contribute to the teamwork required to make a film but actually harboring their own agendas. It’s amusing, and it all rings true. And you get the sense that these show business people have difficulty not seeing everything in movie-like terms, as if real life is a mere script that will conform to a plot device. Perhaps they have spent too much time in the world of make-believe. They can’t discuss who the killer might be without sounding ridiculous:

Tom had to look away. He turned to Eddie and asked, “Think it’s that old man?”

“The roadside jerky guy,” Tom said, and then back to Eddie, “Tell ‘em your theory.”

“I was saying to Tom, maybe it’s that jerky guy mad at us for some reason.”

“Why would he be mad?” Sheila said.

About three-quarters of the way through, Bottom Feeders segues from a whodunnit into an action thriller, and though I preferred the whodunnit part of the book more, there’s no doubt that the author handles the thriller part with dexterity. He keeps the tension high and the narrative moving, cutting back and forth among the characters engaged in a life or death pursuit. He is especially good at keeping clear where each character in a scene is in relation to the other characters, throughout all their frantic movement.

I enjoyed Bottom Feeders and zipped through it fast. It’s an entertaining mystery, but it also provides a sharp look at what it’s like to toil for a living in the low-budget movie trenches.