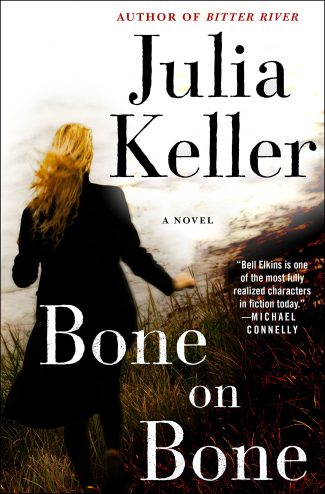 Bone on Bone by Pulitzer Prize-winner Julia Keller is the eighth book in the beloved Bell Elkins series, which sends readers headlong into the thick of a mystery as young as today’s headlines—but as old as the mountains that hold these lives in a tight grip.

In this emotionally packed mystery, Pulitzer Prize-winning author Julia Keller adds another fantastic entry to the Bell Elkins series. A few years have passed since the events of Fast Falls the Night, and Bell is just finishing her prison sentence and preparing to acclimate back into society and the life she used to know in Acker’s Gap, West Virginia. Her small, cozy community has been increasingly plagued with what has become a severe nationwide dilemma: the opioid crisis. Bell devotes her future to go after the big pharma companies who produce the drugs that have caused the addictions.

Keller offers several points of view in Bone on Bone, including a local family’s first-hand experience with their teenage son as he spirals down the rabbit hole of addiction and its consequences, as well as that of ex-sheriff Jake Oakes, who is now a paraplegic due to an injury he received in Fast Falls. The ease of Keller’s words along with each subtle turn of phrase highlight her magnificent writing style. Her vivid descriptions conjure a clear picture in the reader’s mind in a well-balanced fashion that exudes talent.

He was treating her with the indifference that she had come to expect from all state officials over the past three years, from guards to cooks to custodians to employment counselors. She was a number, not a person.

That didn’t bother her. In fact, it was a comfort. Being treated as special was not a kindness. It always carried a price tag. Anonymity was armor.

Bell is a remarkable main character. She’s definitely flawed and more realistic than most others I have read as of late. There are no bells and whistles, and her averageness makes her more relatable. Incredibly smart, strong, and resilient, Bell brings a lot to the table.

Once on top of the world as a hard-working and successful prosecutor, Bell gave it all up when she admitted fault in her father’s death when she was a child. She left her job, asked to be sentenced, and carried out her punishment. This book starts as she’s finished her sentence and must now find her way in the world. Her strength pulls her along, giving her the ability to face everyone’s questions and find a new purpose in life.

“There’s nothing in here about any sort of complaint. You didn’t bitch about anything. In three years. That’s pretty rare.”

She shrugged. “Just wanted to get along. Let the time pass.” She was keenly regretting the fact that she had said anything beyond “Okay.” She’d interrupted his rhythm, causing him to give her an extra bit of scrutiny.

He was looking at the document again, but she wasn’t off the hook and she knew it. This time, his eyes didn’t automatically sweep over the long paragraph in the middle of the second page, the single-spaced summary of her life—her offense, her sentence, her background. Her story was unusual. Unusual got you noticed. She didn’t want to be noticed.

One of my favorite characters in the book is Jake Oakes, who has been dealt a terrible hand. Shot by a kid a few years ago, the bullet lodged in his spine and left him a wheelchair-bound paraplegic. A sheriff before the accident, his life has been completely turned upside down. He is a strong character, and while it’s easy to feel for him and his situation, he doesn’t want the sympathy. What he actually wants is to be working in the department again. Add in an unrequited love and it all comes together for an interesting story arc—one of which I want to hear more.

One of their interactions came during a break at the inquest for the fatal shooting of Danny Lukens. The second occurred just before the commencement of the civil suit for wrongful death brought against the county by Danny’s grandmother. On both occasions, Jake’s exchange with Bell was formal, stilted, and short. The first time, she looked into his eyes, looked down at his wheelchair, and then looked in his eyes again. She said, “Oh, Jake.” He replied, “Yeah.” That was it. The second time was similar: Her “How’re you doing?” Was followed by his “Well as can be expected, I guess.” They’d always had their own system of communication—shrugs and sighs, mostly, and upraised eyebrows—and that system still adhered. They both sometimes found words to be impediments to true communication. They’d never discussed that—discussing it in words would have made them hypocrites, wouldn’t it?—but sensed it in each other. Words are superfluous and irrelevant, is how Bell would’ve put it. Words suck, would’ve been Jake’s way of expressing the same sentiment.

I live in a small, Appalachian town, so Keller’s portrayal really hits home—especially this passage where Keller eloquently describes the small-town life of Acker’s Gap and Bell’s investment in it:

Bell shook her head. She had a bad case of the used-to-bes. There was no cure—at least none she’d ever heard of, other than just putting up with the sadness, the melancholy, caused by wandering through a dense thicket of her yesterday’s.

This town was where she’d grown up. Yes, she’d gone away to college, then law school. She’d lived in the D.C. area for a while after that.

Then, in a move that surprised herself as much as it did everyone else, she had returned.

Newly divorced, with her sixteen-year-old daughter in tow, she had come back. She’d had a vague, poetic notion about rescuing Acker’s Gap. Ripping it free from the fist of darkness that seemed to hold the town in its smothering grip. Drugs, alcohol, poverty, crime, despair: The roll call of affliction was dreary. And endless.

If anything, Keller shows that addiction isn’t picky. It doesn’t choose a certain type of person, family, or background. It can affect anyone. And once it does, it tears apart everything around it like a snowball falling down a steep hill.

The storylines of Bone on Bone tugged at my heart. The realness Keller brings to the page made it a first-rate story. I didn’t have any trouble jumping into the series here, and I will definitely be following Bell Elkins in the next installment.

Read an excerpt from Bone on Bone!