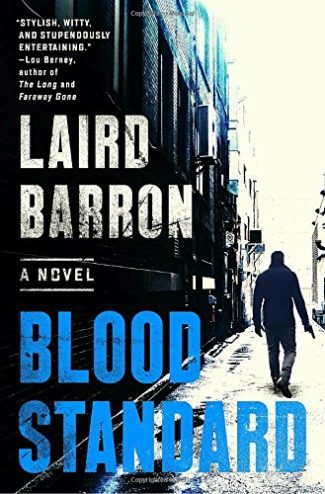 Award-winning author Laird Barron makes his crime fiction debut with Blood Standard, a novel set in the underbelly of Upstate New York that’s as hardboiled and punchy as a swift right hook to the jaw.

I’m not a detective, I’m merely a man with less exacting scruples than most.

Crime and horror have gone hand in hand since the beginning. Many authors have mingled the two, from Edgar Allan Poe’s “Murders in the Rue Morgue” to classics such as William Hjortsberg’s Falling Angel. Countless authors—such as Joe Lansdale and Elizabeth Hand—have written both. And really, when is a serial killer novel considered horror, and when is it crime?

Laird Barron is one of my favorite short story writers, and he has built an American mythos of cosmic horror with his collections The Beautiful Thing that Awaits Us All, Occultation, Swift to Chase, and his Pynchonian (in style, not length) novel, The Croning. Some of his stories have had mob heavies tangling with warlocks and powers beyond human comprehension—such as the excellent “Hand of Glory” and the yakuza novella Man With No Name—but this is Barron’s first crime novel. So there was a sense of trepidation, especially with the main character’s name: Isaiah Coleridge. It’s a bit of a trope to give your character a mishmash name like that, Biblical and literary. Harry Bosch, no relation to the painter of Garden of Earthly Delights. So I was concerned.

When the shit hits the fan in my life, it’s usually a truckload. Today had not proved an exception thus far. My side ached. Everywhere I glanced, I beheld a constellation of woe and travail. The death’s-head of the universe grinned at me, either in sympathy or contempt.

I should have known better. Isaiah Coleridge doesn’t have cute a nickname like “Ike.” He hails from Nome, Alaska, an Army brat whose estranged father is a career soldier warrior-poet out of Denis Johnson’s Tree of Smoke. I assumed he had native blood, but his mother is Maori, and their fighting culture runs thick in his veins. He carries a jade war club for special occasions and is such a hulking presence that he needs no nickname. He’s “hoss” or Hercules to his compatriots, can crack wise as well as crack heads, and his background—fed out in morsels—is as worthy as the mythical demigod to which he is compared. If you remember, Herc wasn’t the nicest guy; he was the hit man for Olympus. He killed Amazon queens when he wasn’t cleaning out the stables.

We meet Coleridge in Alaska on a hunting expedition with some nasty Outfit characters who are colorful but grounded in reality. He makes do with nice, minor touches. The made man that Coleridge makes his blood enemy is a natty dresser who knows Sicilian stiletto fighting, and he fights properly when the time comes. When his boys come to avenge the disrespect and damage done to him, they torture Coleridge with the banality of experienced psychopaths, no flash. Barron knows we’ve seen Casino and the like, and even a hulk like Coleridge can’t scream and then break his bonds like a Hollywood action hero. He survives because the boss likes him, and he flees Alaska for Upstate New York with the Outfit’s blessing, as long as he doesn’t freelance.

Like Hercules, Coleridge finds himself on a farm needing a shoveler, with a motley cast of likely rural misfits—similar to many I have met in my travels through Maine, New York State, and Wisconsin. Next door to the farm is a trapeze troupe where he meets Meg, a wily child of the circus. At the farm, he finds Lionel—a drunken vet punishing himself for the atrocities he did not die trying to stop—and a wise old couple whose granddaughter Reba flirts with trouble like any rebellious teen.

Barron lives in the area he’s writing about, and he obviously loves it—warts and all—for we get a tableau of rural America that doesn’t hew to our mythology. This isn’t a homogeneous population (neither is Anchorage, Alaska, despite our assumptions), and we meet everyone from Italian mobsters to black war photographers to a pan-Native gang who want to take machetes to the local white supremacist crew and out-of-town New York mob elites alike. It is a refreshing change of pace, although I never mind books that use the Mafia syndicate accurately. It’s the authors who watched The Godfather and Goodfellas and want to suggest there’s honor or Robin Hood sentiments or that these guys don’t profit off child rape and drugs because they have “codes” where I start laughing. I worked at the port in New Jersey for eight years; the only code mobsters have is green. And while Barron does play up the colorful mummery of post-Teflon Don mob antics, it is always menacing, and the only honor they have is a façade when it suits them.

When Reba disappears after a tangle with some bad boys at the local fair, Coleridge takes it upon himself to find her—not only to pay back his landlords at the farm for taking him in but truly to scour his soul of the blood he’s soaked it with after fleeing his father for his own rebellious rage. When he was 17, his father and mother went on a canoe trip. Only Dad came back. Coleridge toughened up in gangs, fight clubs, and finally the mob, and when he took three beefed-up brawlers to avenge his mother, he woke up in the hospital. So he has a soft spot for Reba, whose father abandoned her, who is the only one who can tame their vicious racehorse Bacchus, and who hates Isaiah on sight.

The day after Isaiah Coleridge rescues her, she is gone, and he is in bed fighting off a fever from his wounds. He wakes to a cold trail, which leads to the aforementioned white supremacist and Native gangs, one more brutal than the next, and the underbelly of drug and human trafficking that feeds such enterprises.

The journey from birth to darkness has its share of plot twists, reversals, and triumphs. Nonetheless, one must never forget it’s into the dark that we’re hurtling. We all shake hands with King Pluto. Understand, I’m tough as nails. Even so, I’ve got my limits. You don’t need a mallet to take me apart. Let me stew in my own misery. Let me drown in what-ifs and maybes.

The resulting search teams him with Lionel, and they make an entertaining pair. A well-spoken thug with scarred knuckles and a size-56 shoulder makes for an amusing investigator, muscling when required and tricking the powerful who think he’s as stupid as his background suggests to them. The fights are not belabored upon, as Coleridge is not here to brag about his prowess. Barron has either scrapped or watched plenty to know just how fast and brutal real fights are. He wastes no time describing every move. The story is salted with the proper action seasoning, but it’s more about revealing character, whether it is the missing Reba, the secrets of the vast wilderness and the people who live in it, or Isaiah himself. And like Poe with the Rue Morgue, this story predates the requirement that detective stories return the world to order.

Who the hell says there was any order in which to return? Sometimes it’s as inexplicable as an ape on the loose. He doesn’t flummox us with such an oddity. The plot is neither chaotic nor over-engineered, but the enjoyment comes from spending time with characters he knows well and exploring the landscape upstate, as wild as Alaska or Maine if you look deep enough. Fans of True Detective will enjoy the inflection of cosmic horror in this tale by one of its best authors, who knows not to lay it on too thick. A little of King Pluto goes a long way. The first Isaiah Coleridge novel is less True Detective and more the laughing Buddha cop in the nihilistic wasteland of Night Dogs-era Kent Anderson meeting the absurdity of life embraced by James Crumley in his Milo Milodragovitch books. No matter what you call it, it is singular and excellent, and it sets a standard that will be hard to match.