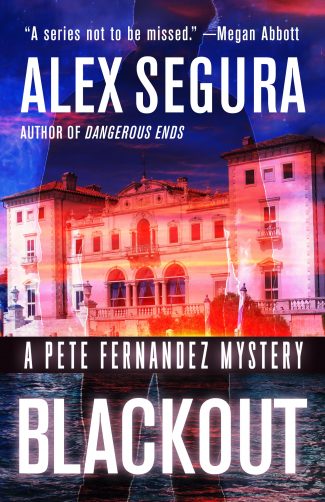 Blackout by Alex Segura is the fourth book in the Pete Fernandez Mystery series.

If you’ve read the earlier books in Alex Segura’s Pete Fernandez series, you know that Pete—a Cuban-American Miami native—is a recovering alcoholic who almost inadvertently came to the work of being a paid PI. No Philip Marlowe or Lew Archer here; Pete needed time to learn the investigative ropes. He made frequent mistakes in his early cases and saw people he sought to protect get killed. By now, though, in this new story, Pete has become pretty good at his job, and his confidence has grown in proportion.

His previous cases saw him take on a legendary criminal gang in Miami, a serial killer, and forces connected to the Castro regime in Cuba. Blackout finds him dealing with a murder from his own past, and as if this is not enough to spook him, he also has to face the grave dangers posed by a menacing cult in his sights. Pete bobs and weaves and defends himself, but all the while—consistent with the series’ focus on character—Alex Segura continues to show us the ups and downs of his personal development. Pete still has internal demons to battle, and the reader can relate to his struggles and doubts. In the rich and varied world of private eyes, Pete Fernandez is one detective you cannot call larger than life or wiser than anyone reading, but it’s the man’s very ordinariness—his decency along with his perseverance—that makes him difficult not to like.

The story begins with Pete as a teenager. We see the high school Pete and his classmate Patty Morales, whom he likes. Pete experiences disappointment when he asks Patty to the prom and she says that she doesn’t think of him in that particular way. Segura’s portrait of his future private eye is superb here; the sensitivity and alert antennae that the older Pete will have are apparent, and so is the sometime hesitancy. This is exactly how I had envisioned Pete as a younger person, and it’s completely believable that he would be haunted into adulthood by an event he had nothing to do with. One day in high school, he is among the last people to see Patty alive before she disappears. This disappearance proves to be the novel’s original trauma—the incident from which the plot threads spring and to which Pete, and not only Pete, will always be tied.

I enjoyed the first three books in this series, but there’s no question in my mind that Blackout is Segura’s best to date. Not unlike his private eye, he keeps growing in assurance. Blackout is longer and richer than his other books, and it is by far the most complexly plotted. The story moves between a few different time periods with ease, ever clear, easy to follow. What begins with Patty Morales’s vanishing becomes a terrible murder case, and this, in turn, expands into a tale involving an ambitious Florida politician, assassination, the cult I mentioned, and the circling back to the defining crime from the past.

I never found myself—as I sometimes do with detective novels—flipping back through the pages to check a fact and make sure everything is hanging together. For the first time yet, Pete moves through his investigation—in Miami and later the Keys—like an almost-accomplished professional, and as a reader does when absorbed in a PI book, you move with him. The deceptions, the dead ends, the revelations, the steps forward and back then forward again—the book has something of that wonderful rhythm you get in classic private eye fiction.

At the same time, Segura continues to do his own thing with the genre. Interwoven with the novel’s plot mechanics is the story of what’s going on inside Pete. He is hard on himself—and not without reason, considering his past—and there are occasions when the reader may think he is going overboard with his self-flagellation. Still, the passages of introspection provide some of the book’s finest:

But standing over a pile of remains that had once been a girl, a girl he knew and cared for, pulled him into a pit of darkness he’d never considered—a lower level of guilt and shame that threatened to drown him. He knew, logically, that it wasn’t his fault. He hadn’t seen Patty in over a decade, had only just begun to investigate her disappearance. But Pete also knew that he—a drunk, lonely shell of a man with little to look forward to aside from the next bottle—was alive, and she’d died before experiencing any of the things life had to offer. She would never graduate college. She would never fall in love. She couldn’t list her favorite live shows, or reminisce with old friends about their high school days. She was gone, and she’d deserved better. Pete was alive and had squandered everything. It was a knockout punch from the real world, and it still stung, even after years of trying to rebuild himself.

I don’t deserve to be alive.

Perhaps there’s an irony here. Perhaps it’s his low sense of self-worth that has helped Pete succeed in his profession despite himself. He doesn’t have a death wish per se, but he faces threats with a relative calm. When you care only so much about yourself, you have solid nerves under pressure. Like the genre’s most macho detectives—though Pete is not macho—he puts himself at risk over and over.

If I have any criticisms of the book, it’s about the way—in three or four scenes—Segura handles his escapes from danger. A person’s opportune arrival on a highway saves Pete once; another time, a storm-caused blackout hits at precisely the right moment; further on, a gunshot from a friend Pete thought dead gets him out of a hopeless situation. These resolutions to tense scenes, I must say, irritated me a little bit. They have a contrived feel at odds with the rest of the novel. Yet, near the end, in the novel’s penultimate confrontation that wraps up the central plot strand, Pete is in firm control, a master of his own actions and destiny. He deals with someone he wants an explanation from in a way the Pete of the earlier books would never have.

Pete leapt over the table dividing the booth and gripped Chadwick by the jacket, pulling the older man over the ketchup-soaked plate and knocking his half-empty pint glass of beer off the side.

Pete gets the truth out of the man, but he also inflicts physical pain on him, doing something to him of which Mike Hammer would be proud. Pete has been on quite a journey since we met him four books ago: he’s the same person he was before, and yet, he’s different. This tension between Pete’s core self and how his job as a private eye is changing him is one of the most interesting aspects of the series. And it’s safe to say that Pete will keep evolving. The scene that ends this book is a cliffhanger, one that will leave you wanting the author to finish book five fast. But it also makes an important point about Pete.

He has never been so committed to living.

Take a visual tour through Blackout with GIFnotes!