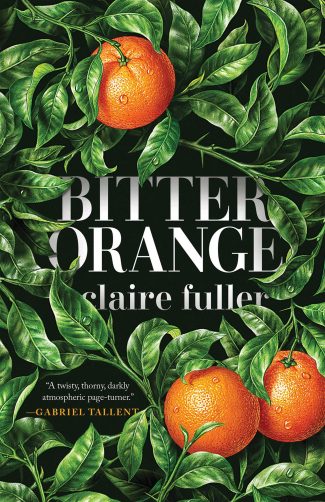 From Claire Fuller — the author of Our Endless Numbered Days and Swimming Lessons — Bitter Orange is a seductive psychological portrait, a keyhole into the dangers of longing and how far a woman might go to escape her past.

The narrator of Fuller’s new novel, Frances Jellicot, is in her 60s in ailing health. Bits and pieces of her memories from a few fateful weeks in her past are scattered through her conversation with a visitor, as are hints about her current living situation. The tale she tells is of a love triangle gone wrong (do those ever go right, really?) in the creepiest of places, a decaying English country manor that has sat empty since World War II, during which the Army requisitioned it.

The critical events of the novel are set in 1969 when Frances is 39 years old. Her bed-ridden mother, for whom she’s been the only caretaker for the last ten years, died a month ago and she finds herself alone in the world without much money. She has no family or friends to turn to for comfort or help. Frances’ parents split when she was a child, and she hasn’t seen her father since. She’s a 39-year-old orphan in London who has been isolated for most of her life.

As a child, Frances studied hard and was in her third term at Oxford when she dropped out to take care of her ailing mother. Frances continues to write during this time—several of her articles were printed in a small specialty publication, Journal of the Society of Garden Antiquities. A month after her mother’s death, a letter arrives through the Journal for Frances. An American wrote to ask if she’d take on a commission to assess the architectural garden features of Lyntons, a country estate he recently purchased in Hampshire. It seems like a great opportunity to move on and make some much-needed money.

When Frances arrives at Lyntons, there are two other people already there: Peter, who has been commissioned to assess the condition and value of the building and its assets, and his wife, Clara. It’s hard to say much about the plot without spoilers, so I’ll withhold them for the benefit of the reader. This is one of those novels that’s a painful joy to watch unfold.

There are so many angles to discuss in this novel. Gender, memory, guilt, relationships, social change, Fuller’s use of clothing in relation to character development, etc. The changes that Frances undergoes are exciting to watch. Early on in the novel, she says:

“We had a routine, Mother and I, which never varied and I had imagined that being able to eat when I wanted to, go to bed when I wanted, do anything I wanted, would make me free. I believed I would be transformed. I’d been preparing for Mother’s death for ten years—every time I came home from the shops or the library, I unlocked the front door uncertain of what I would find. After she was gone, I was ready to leave too. I wanted to be rid of the memories of those years which were soaked into every surface.”

At the end of the novel, Frances is left with a wild mass of memories that have soaked into every fiber of her being—memories that have permanently stained her, like the spilled wine that has soaked into the antique furniture at Lyntons. For some, such stains devalue a piece of furniture, for others, they add character and perhaps provide the hint of a story. The thing is, one can never be rid of memories, so some tell different stories to try to cope with them. But the truth will out—sometimes, anyway.

Fuller’s latest is all about stories. There’s the overarching narrative of the novel, the story that Frances tells her visitor, the tales that Clara tells Frances about her life, and the story that Frances tells herself about Peter, to name only a few. As Frances remarks at one point, “I was tired but like a child with a bedtime story, I didn’t want it to stop.” As a reader, I could absolutely relate to this sentiment.

Frances is obviously a smart woman (hello, Oxford), but she’s woefully naive when it comes to men and friendships. She’s never really had friends, and when Peter and Clara breezily welcome her into their lives, she’s eager yet charmingly awkward about it: “But the world is a nicer place when you think everyone is telling the truth. There are no agendas, no hidden motives; no one lies for dramatic effect.”

Frances’ naiveté and the slow unfolding of histories substantially thicken the suspense that pervades every page of Fuller’s work. This high intrigue, along with the inherent eeriness of the setting, makes Bitter Orange a perfect fall read.