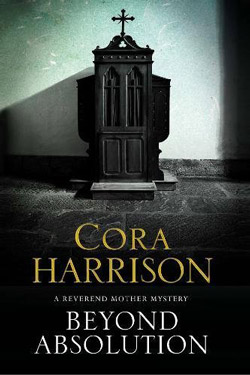 Beyond Absolutionby Cora Harrison is the third book in the Reverend Mother Mystery series (available August 1, 2017).

The mystery of why anyone would want Father Dominic dead grips the city of Cork, and speculation is rife on both sides of the religious persuasions that make up this Irish city. It is the 1920s, and the Irish Republican Army is making its mark on behalf of the Catholics it believes it is protecting from those who would do the community harm. The IRA is blamed for many of the events that don’t have a clear perpetrator, but what, if anything, could the Republicans have to benefit from the cruel murder of Father Dominic.

Anyone familiar with the confessional knows that Father Dominic was bound by unbreakable bonds not to share anything he learned, regardless of the seriousness of the information that may come his way in that small box where people unburden their real and imagined sins. What is it that Father Dominic knew that caused his untimely demise?

The relationships between those inside the Church who follow the religious ways and those who do not form the backbone of this book, and the heavy cloak of responsibility, duty, and spiritual belief weighs heavily on everyone regardless of their affiliation.

The Reverend Mother is a staple in the community, and the relationship between her and the various characters who make up the local community is finely drawn. She has a skillful mind and a nose for mystery, working doggedly away on the case of Father Dominic. Slowly, the mystery begins to unfold, but not before many alleys, avenues, and paths are trodden to reveal secrets that many would prefer had remained hidden from everyone’s view.

But the Reverend Mother doesn’t back down and sticks to her task of getting to the bottom of the mystery. It becomes clear that whoever murdered Father Dominic was not someone who came to confess but someone who came because of something that was previously unburdened. It seems someone did not trust the strength of Father Dominic’s calling and faith to keep the secret from getting out.

Cora Harrison does a fine job in this book of writing a murder mystery with a strong sense of place. The action and backstory never leave the churches and the streets of Cork, which contributes, in no small way, to the achievement of a story that is heavy with atmosphere. Cork and its inhabitants combine to draw you into a story that serves as a potent reminder that you may come to know people around you, but you never truly know what is in their hearts. And if what's in their hearts is murder, then that knowledge, as in Beyond Absolution, may come too late for some.