Review: The Beloveds by Maureen Lindley 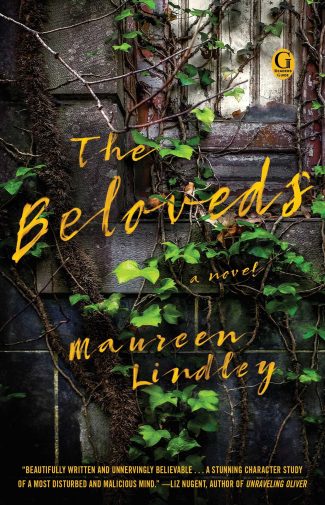 The Beloveds by Maureen Lindley is an exploration of domestic derangement, as sinister as Daphne du Maurier’s classic Rebecca, that plumbs the depths of sibling rivalry with wit and menace.

We all know a Beloved. Perhaps you are one. One of the special few. The one blessed by luck or fate or DNA to ride through life on smooth surfaces. They possess certain qualities prized in our society: beauty, grace, kindness.

None of which can be applied to Elizabeth Stash Walker. Her younger sister, Gloria, is another story. Beloved since birth, Gloria is all the things Betty—the detested nickname bestowed upon Elizabeth by her baby sister—is not. But Elizabeth has some attributes Gloria appears to lack: cunning, patience, and a connection to Pipits, the family home the elder sister plans to inherit on their mother’s death.

I shut my eyes and attempted to understand this novel, wordless language, one of changes, and rhythms, nature’s voice, quick and exciting as a spark of silver. Slowly some secret, unexplored part of me opened, and then as though I had always known it, I recognized the sweet drumroll of Pipit’s voice call me.

For hours after I was dizzy with the ecstatic feeling of being adored, of being chosen. It was as though lightning had struck and changed the shape of things forever. Straw to gold. Let Mother and Gloria gave each other. I had my beautiful house.

Elizabeth and her husband, Bert, co-own a thriving art gallery. Much of their success can be attributed to Lizzie—the slightly less detested nickname used by Bert. He is older than Elizabeth and quite solicitous toward her. He is also a favorite of her mother, Gloria, and Henry, Gloria’s husband. And Elizabeth/Betty/Lizzie looks forward to a comfortable and respectable life.

But things don’t always go the way we plan.

I am barely in control, and with the excuse of a headache I take to my room. It is a good room, probably the best bedroom in the house. It was my grandfather’s in his last years, the one where he lay on his deathbed. I don’t mind that. Seeing as how I am the only one who ever mentions him, the only one to give him credit for all he achieved here, it is fitting that it should be mine now.

I surrender myself to grief, to a pain like nothing I have ever felt before. I am without a shell, no carapace to absorb Mother’s final blow. Pipits’ walls are damp with tears; it has lost its voice.

I lie on my bed and pull to my chin the patchwork quilt that Mother made for my thirteenth birthday. She thought it odd that I wanted one sewn from the clothes I had grown out of. But they would only have been handed down to Gloria, and she had plenty of her own. I wasn’t about to let her take anything else from me if I could help it. I have a permanent reminder of those clothes now; my mauve cotton blouse, the pajamas with little cherries bouncing over the brushed cotton fabric, my primrose yellow party dress that Gloria once had hopes for.

While not particularly likable, Elizabeth to be sympathetic in her own way. I get the nickname thing. I’ve been Debbie, Deb, Debber, Debster, Duck (don’t ask), Sis, Kid, and Smitty. Mostly, I roll with it, but some get on my nerves. And I think everyone knows a Beloved—or perceives someone to be Beloved. It could be a sibling, cousin, or the child of your mother’s best friend who is held up as a shining example of all that is good and right. Someone you will never be able to live up to. And even if everyone else adores this person, and this person treats us well, we sort of hate them.

There are stories I call Stop Now Stories: A Simple Plan, Fargo, Shallow Grave, and any number of sitcoms are Stop Now Stories. The protagonist’s actions make things worse and worse. As the reader, or viewer, you keep thinking, “Just stop now!” But they don’t, and while you may cringe, that is what keeps you interested right until the very end.

Several times reading this, I thought, “Stop now! Just stop.” But the character I was trying to reach didn’t pay any attention. And that’s what made this such a nerve-wracking and fun read.