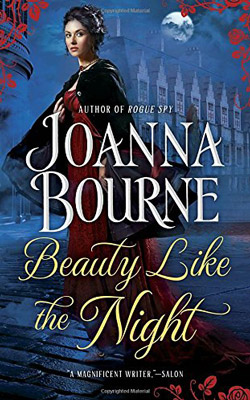 Beauty Like the Night by Joanna Bourne is the sixth and final book in the Spymaster series—a stirring tale of intrigue, espionage, and attraction (available August 1, 2017).

There’s an old chestnut about spies that boils down to, “It takes a spy to know a spy,” or alternatively, “It takes a spy to catch a spy.” Joanna Bourne’s Beauty Like the Night, the sixth and final entry of her Spymasters series, certainly fits this rubric. Two former intelligence agents who once fought for opposing armies explore the possibility of working side by side to solve a disturbing mystery, the disappearance of a young girl.

Séverine de Cabrillac, orphan of the French revolution and sometime British intelligence agent, has tried to leave spying behind her. Now she devotes herself to investigating crimes in London and finding justice for the wrongly accused.

Raoul Deverney, an enigmatic half-Spaniard with enough secrets to earn even a spy's respect, is at her door demanding help. She's the only one who can find the killer of his long-estranged wife and rescue her missing fourteen-year-old daughter.

Spanish wine merchant Raoul operates under the cover of darkness, for the most part, when he inhabits his other persona, a mysterious cat burglar. It makes sense that he would reach out to Séverine in the middle of the night, waking her from sleep:

He’d watched her from the day he’d found her name written at the scene of Sanchia’s death. More than a week now. The name had meant nothing to him, but he’d recognized her at once, even after so many years. She was as beautiful as he’d remembered. In the same room with her, in her bed, the self-contained force of the woman struck like a hammer blow.

Longtime readers of Joanna Bourne will recognize a familiar tell: the “even after so many years” phrase. The Spymasters world is one that stretches over decades, beginning in the bloody aftermath of the French Revolution. Undoubtedly, readers of Beauty Like the Night will want to read the preceding stories; here is a recommended method for doing so. Suffice to say that a decade earlier in Spain, Raoul was hauled up before Séverine—and that incident in their mutual past will greatly affect their search for Pilar, Sanchia’s missing daughter.

She’d been a legend in Spain a decade ago—the woman who took many names, who wore many disguises, who was always frighteningly effective. They said she’d given up spying. That she was a private person now, investigating private crimes.

Whether or not Raoul believes Séverine is retired—and he doesn’t—he needs her expertise to find his deceased, long-estranged wife’s killer. Séverine actually is a retired British spy—if someone who is the adopted daughter of William Doyle, the spiritual head of the British spy network, can ever be truly considered to be outside the world of her upbringing. She leans on her father to understand and interpret her nocturnal visitor.

“Smaller than you,” Séverine said.

“Everybody’s smaller than me,” Papa ambled along beside her.

“Most men are taller than Hawker.” She led last night’s memories through her mind one by one. Pictured the man standing over her, holding a knife. Mentally measured him against the window frame where he’d paused an instant before he slid away over the sill in a smooth, practiced twist of his body. “He’s midway between you and Hawker.”

Papa—William Doyle in the spy world, Viscount Markham to the ton—was not her father by blood. That had been the Comte de Cabrillac, dead in the Terror of the Revolution. She barely remembered the horror of his death and her mother’s. The months afterward when she and her sister Justine struggled to survive where a nightmare of pain and fear. Then a huge, gentle stranger had said, “She is my daughter,” and carried her in his arms out of the gates of Paris.

It was her papa that painstakingly taught her the secrets of spycraft over the years. She’ll need to call on every bit of knowledge to unravel her newest case, particularly since all hell breaks loose in her personal world. Her office is ransacked, reduced to rubble, chaos, and broken shards. The looters don’t know Séverine if they think this will deter her.

Pain and bitterness ached behind her eyes, but she would not cry. Think what this says about those men, not how much it hurts. Don’t give them the satisfaction of hurting you.

Experienced bastards had searched her office. At least two men. That was obvious from all the little signs. They’d gone clockwise around the room, from the edges to the middle, covering every square foot in turn, the way she’d been taught to search, both by Papa and by Military Intelligence. Somebody had received at least a portion of the solid training she’d had. No ordinary thieves had been in there.

As things get more complicated, Séverine and Raoul are faced with a situation where the simplest answer is likely the best. Why are they both under siege all of a sudden? What is it about them working together to unravel Sanchia’s secrets that is so frightening? Shoulder to shoulder, they face setbacks and vicissitudes, eventually realizing that someone(s) is willing to risk everything to prevent them from discovering the truth—the origins of which go back to a bloody Spanish battleground.

Séverine and Raoul make formidable adversaries, and Beauty Like the Night confounds the reader at every turn. What a worthy conclusion to Joanna Bourne’s mesmerizing Spymaster series.