Review: Bearskin by James A. McLaughlin

Read Gabino Iglesias's review of James A. McLaughlin's Bearskin, then make sure you're signed up and comment below for a chance to win a copy of this sensational debut! 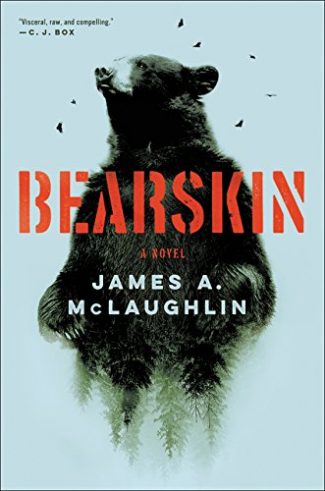 Bearskin by James McLaughlin expertly brings the beauty and danger of Appalachia to life, resulting in an elemental, slow burn of a novel—one that will haunt you long after you turn the final page.

James A. McLaughlin’s Bearskin is a literary novel dipped in violence and filtered through the best elements pulp has to offer. Beautifully written, brutal, and sometimes dipping into surrealism, this is the kind of hybrid novel that is at once a crime story, an explosive eco-thriller, an exploration of cartel violence, and a meditation on nature and humanity’s (op)position therein.

Rice Moore is working as caretaker and researcher at a remote forest preserve in Virginian Appalachia. Besides keeping him busy and in solitude, the job is helping him leave behind a shady, violent past that had him in the crosshairs of Mexican cartels. Between refurbishing a cabin that will be used by a researcher in the near future and taking/inputting copious amounts of data from the preserve, Rice spends his days mostly in isolation.

Unfortunately, his relative peace begins to crumble when he finds the mutilated carcass of a bear inside the preserve. As the bear body count increases, so does Rice’s obsession with catching the poachers responsible for the mutilations. His obsession leads to hostile altercations with locals—some of whom are also responsible for the horrible act that drove the previous caretaker away—as well as increased attention from the law and Rice’s employers. When his predecessor comes back to check on the cabin—which, to Rice’s surprise, she is going to be moving into when it’s ready—she joins him in his investigation. What follows is a thrilling narrative in which doing what’s right against incredible odds also means getting closer to a past that promises nothing but pain and death.

The first thing that needs to be said about this novel is that McLaughlin achieves a perfect balance between the violence of prison fights, angry locals, and Mexican cartels and the breathtaking beauty of Appalachia, the sights and sounds of pristine natural spaces, and the almost magical existence of a plethora of animals when observed in their natural habitat. In this novel, the many passages dealing with nature are worth the price of admission, and they are all delivered between memories of the events that lead Rice to his current situation and the profit-driven brutality and ignorance he is forced to battle:

The giant trees were like dormant gods, vibrating was something he couldn’t name, not quite sentience, each one different from the others, each telling its own centuries-long story. On the forest floor, chestnut logs dead since the blight had rotted into chest-high berms soft with thick mosses, whispering quietly. Something called out and he turned to face a looming tulip tree, gnarled and bent like an old man, hollowed out by rot, lightning, ancient fires. His skin tingled.

Not enough can be said about these passages. Without them, the novel would still be great—a solid thriller with a likable main character, plenty of action, and a deep look into a bizarre international market that thrives on the gallbladders and paws of bears. However, with these passages serving as both the foundation and connective tissue of the narrative, everything becomes special, unique, and deserving of attention.

Besides the great writing, the way McLaughlin build tension is remarkable. The novel jumps right into the story with a mutilated bear carcass and then starts revealing pieces of Rice’s past. But the relationships with the locals—already strained by the way they perceive Rice’s job and the rights they think they have to the land he protects—and the reappearance of Rice’s predecessor complicate things in a wonderful way. With those complications thrown into the equation, the author carefully constructs a novel that slowly crescendos in terms of tension, slowly building to an explosive finale but never becoming dull in the process.

Bearskin walks a fine line between a thriller and literary fiction, and it successfully keeps clear of the usual pitfalls presented by both genres. In doing so, it quickly becomes the type of novel that is talked about for a while, and one that announces the arrival of a voice with something special to offer:

Two barred owls moved through the forest, calling to each other in otherworldly voices. A large bear ignored the old bait and snuffled at what was left of the two bear carcasses for so long, Rice decided it was either mourning or feeding on the carrion. Later, two does passed by, and a raccoon climbed around on the bait structure at dawn. The sky in the opening overhead turned to hot gold. He shaded his eyes and could make out a pair of ravens circling hundreds of feet up, quorking to each other, glinting like chips of obsidian in the sunlight.

There is rugged beauty in Appalachia. There is danger in the inhabited places that push against the last pockets of untamed, unspoiled American wilderness. There are also evil organizations working at the border, feeding on the desperation of many and the addictions of those north of the border. This novel brings all of those together and does so in spectacular fashion. Anyone who reads this will soon add McLaughlin to the list of authors whose next novel they eagerly await.

Comment below for a chance to win a copy of Bearskin by James A. McLaughlin!

Bearskin Bundle Comment Sweepstakes: NO PURCHASE NECESSARY TO ENTER OR WIN.  A purchase does not improve your chances of winning.  Sweepstakes open to legal residents of 50 United States, D.C., and Canada (excluding Quebec), who are 18 years or older as of the date of entry.  To enter, complete the “Post a Comment” entry at http://www.criminalelement.com/review-bearskin-by-james-a-mclaughlin beginning at 2:00 p.m. Eastern Time (ET) June 14, 2018. Sweepstakes ends at 1:59 p.m. ET June 26, 2018. Void outside the United States and Canada and where prohibited by law. Please see full details and official rules here. Sponsor: Macmillan, 175 Fifth Ave., New York, NY 10010.