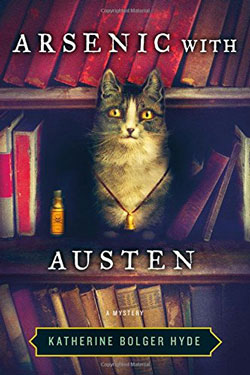 Arsenic with Austen by Katherine Bolger Hyde is the 1st book in the new Crime with the Classics series.

It is a truth universally acknowledged that a reader in want of a mystery usually doesn’t reach for Jane Austen. In fact, I have a rather tremulous relationship with Austen’s works, but when I saw Katherine Bolger Hyde’s debut, Arsenic with Austen, I felt this might be another way to move past my lingering high school disinterest in Pride and Prejudice.

Emily Cavanaugh is a recently-widowed literature professor at Reed College in Portland. While the end of the semester is usually a time of relief, Emily feels a restlessness stir in her bones. The unexpected death of her Aunt Beatrice sends her off to Stony Beach, a place she’d visited often in her childhood. A web of memories entangles her, from her time spent with her aunt, whose love of classic literature Emily inherited, to the snuffed flame of a former romance. Emily’s wish for a different fate is granted when she discovers she’s not only heir to her aunt’s precious library, but the entire estate, a sizable portion of the town, and a six million dollar fortune.

Turns out, it’s also a truth universally acknowledged that a sudden massive inheritance attracts distant family and false friends. Not an hour after Beatrice’s funeral, a distant cousin named Brock attempts to insinuate himself into Emily’s life, while vicious real estate agent Vicki and Mayor Trimble offer to take the burden of town property off Emily’s hands, in hopes of expanding Stony Beach and increasing tourism.

Underlying the frequent visits and oddly unsettling “kindness” of the townspeople is the notion that Beatrice may not have died of old age after all, a sentiment expressed by Beatrice’s former housekeeper, Agnes.

Agnes gave a sniff that seemed somehow expressive of grief. “She was a good woman and a good mistress. She’ll be greatly missed.”

“Do you know, I just realized no one’s told me what she died of. Just old age?”

“Oh, I see!” Emily had been picturing a quiet end, at worst a massive heart attack or stroke that would have killed Beatrice instantly. But acute gastroenteritis—that likely meant hours of suffering, and highly undignified suffering at that. Poor Beatrice. “Was she prone to that sort of thing?”

“Only one food she couldn’t eat without getting sick and that’s lobster, but she was so stubborn, she wouldn’t give it up for good. Apparently, that’s what she ate that night. Doc said that’s all it would’ve taken to kill her.” Agnes’s brow darkened like a winter storm. “I don’t believe it for a minute. Mrs. Runcible was too strong to die from anything that plain disagreed with her.”

Her next words sent a chill through Emily that all her logic could not dissipate. “Something poisoned her. Something—or someone.”

Evidenced in the title, Emily suspects her aunt was poisoned with arsenic. Hyde may be alluding to the theory that Jane Austen herself, who died at age 41, was accidentally killed by ingesting medications with high levels of arsenic. Pulling pages from Austen’s history, along with mentions of the famous Borgia family, the mystery of what actually killed Beatrice gets underway.

A second mysterious death dispels the chance of anything except murder. While searching for answers, Emily stumbles upon two very likely suspects with reason to scare her out of town:

The mayor darted forward as if to head her off, then leaped back to shield the end of the table that faced toward the desk. Vicki slid over to take his previous position, blocking both sides of the corner from Emily’s view. But in the shuffle, Emily caught a glimpse of the whole model.

It showed a stretch of coastline that looked just like Stony Beach. But at the north end of town, where her property—the greenbelt and then Windy Corner—should have been, she saw what looked like a huge hotel surrounded by a golf course, tennis courts, condos … the works.

Emily called on all her drama training from high school to act as if she’d seen nothing. She turned to the desk, unfolded the Wave, and paged through it, pausing at the classified section but not taking in a word of it. She took a deep breath to steady herself, then turned back. “Nothing there. Well, I’ll hope to hear from you tomorrow, Mayor Trimble. Thanks for your trouble. I’ll let myself out.” She strode from the room without looking back.

Safely outside the building, she leaned against the shingles, her breath coming in short gasps. So this was what they had planned! Not just opening up property for anyone who might want to come in and build, but a full-scale luxury resort. On her land. That model—and the preliminary architect’s work it was based on—must have cost a pretty penny. How could they make an investment like that without even a reasonable hope that the property would ever be theirs?

Only one answer to that. They must have believed they had a reasonable hope.

Aside from delectable depictions of food, fans of Jane Austen’s work will enjoy allusions to several of her books, most notably the parallel between Emily’s life in Stony Beach and Persuasion, as her former romance rekindles in the face of danger. The tone of the novel appeals to an older audience, but Hyde gives nod to other popular novels, included Harry Potter.

Readers might enjoy the Clue-like vibe of deciphering the bad guy and their method of murder, and the town is littered with quirky characters who make this small Oregon town lively.

Arsenic with Austen is light read, best enjoyed with a cup of tea.

Read an excerpt of Arsenic with Austen here!