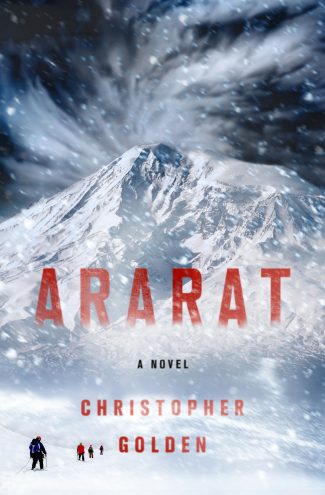 Ararat by Christopher Golden is the heart-pounding tale of an adventure that goes wrong—on a biblical scale.

Personally, I can’t think of a more interesting mystery than an historical one—unsolved mysteries from our past tantalize as historians, scholars, scientists, and writers dig for clues and come up with plausible scenarios for what might have happened—and I think Biblical mysteries, most of all, are incredibly interesting. It’s where science and faith intersect for a common goal: to prove the existence of God. Chistopher Golden’s latest novel, Ararat, delves into the mystery of Noah’s Ark and puts a thrilling, and at times horrific, twist on the myth.

Adam and Meryam are an adventurous couple engaged to be married when they get word from their Turkish mountain friend, Feyiz, that an avalanche has uncovered a geologically impossible cave on Mount Ararat. Although scholars agree that the references to the “mountains of Ararat” in the Bible are not referring to the Ararat we know today, it has still been long speculated that this mountain in far eastern Turkey is the final resting place of Noah’s Ark.

When Meryam and Adam learn about this cave, of course their minds turn to that fabled Ark. Adam is Jewish, and Meryam is Muslim—so this fascination is more about adventure and archaeological discovery than anything else. They quickly cancel their wedding, pack their bags, and fly to Turkey. There are competing archaeologists out there, and they must get there first in order to claim rights to the dig.

The post-avalanche climb up to the cave is dangerous and thrilling:

Left hand digging into snow for a solid hold, she kept climbing. Pick, boot, hand, boot, using her knees to brace herself. The sun had been warm, but as it slid over the distant, jagged edge of the world the temperature dropped precipitously and the wind buffeted them, screaming as it whipped across the face of the mountain. Meryam scrabbled upward, an awkward, clawed spider.

As the small group continues, finally reaching the cave, a general sense of unease surrounds them. But the tension doesn’t ratchet up until the rest of their team arrives in the coming weeks to start the dig in earnest. Ben Walker has been sent by the US government under the guise of the National Science Foundation, but he’s really a senior member of DARPA there to determine if anything they find can be used as a weapon in the US military. With him is Kim Seong, sent by the UN to observe, and Father Cornelius Hughes, expert in ancient languages and civilizations. Walker is heavily scarred from prior monstrous missions, and tough situations are his forte. But this mission is unlike any other he’s done before—and it will leave him scarred in a whole new way.

Walker cursed even as the wind died down and he began to descend normally once more. The cold sank into his bones, cutting through his clothes.

He closed his eyes tightly, teeth bared, and then it seemed a different sort of wind swept over and through him. A sickly sensations made him shudder from something other than cold. He felt as if he’d been dipped in filth that soaked deeper into his skin by the moment. His flesh crawled with revulsion and he opened his eyes, staring about him in desperation as he spun in the harness. Below, people had come out of the cave and were waving to the helicopter pilot to swing him closer.

Walker, Father Cornelius, Kim Seong, Adam, and Meryam have no idea what monstrosity they’ve unearthed, and I enjoyed Golden’s deep dive into the nature of evil in mankind. As we go further and further into the story, it’s not fully clear until the end if the evil and madness that lurks within is purely psychological—as a blizzard bears down on the mountain, trapping everyone inside the cave with a sinister discovery—or if it’s real? Are the remains of the monster they’ve found actually haunting them, or is it mankind’s nature at play?

Golden deftly explores these ideas as fear and murder grip the poor souls who’ve come to discover the truth of Noah’s Ark. Unfortunately, the biblical mystery of the Ark is left behind as the novel turns toward horror, but it’s a wild ride nonetheless. And it’s a bit of a cautionary tale about digging for truths where perhaps it’s best to let the dead rest in peace.

Read an excerpt from Ararat!