Review: An Act of Villainy by Ashley Weaver 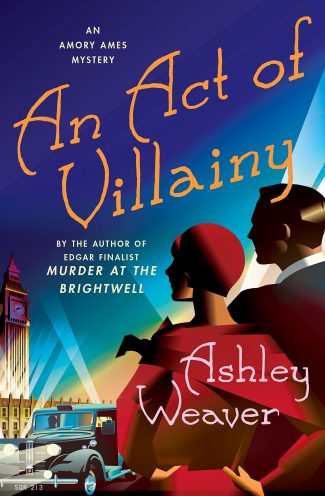 An Act of Villainy

An Act of Villainy by Ashley Weaver is the fifth book in the Amory Ames Mystery series, set in 1930s London and filled with style, banter, and twists that traditional mystery fans will positively relish.

It’s 1930s London, and socialite sleuth Amory Ames and her playboy husband, Milo, find themselves pulled into a theatrical drama worthy of the most thrilling play.

Old friend Gerard Holloway has a problem. The star of the play he wrote and is directing, Miss Flora Bell, has been receiving threatening letters. To further complicate matters, Holloway—a once devoted husband and father—has fallen head over heels for Miss Bell, and their passionate love affair is the talk of the town.

Amory is understandably conflicted about helping Holloway; she’s very good friends with his wife, Georgina, and can’t help but relate to the woman’s predicament. Not that long ago, Amory and Milo’s marriage was just as precarious, teetering on the verge of divorce. So while she’s intrigued by the mystery of the poison pen, she’s predisposed to dislike Flora Bell from the first.

But when threats escalate into violent acts, Amory knows she and Milo have to find the culprit—for the victim’s sake and the Holloways’. Perhaps some good can come from this tragedy if Gerard and Georgina can find their way back to one another.

As with any play, there’s certainly a surplus of suspects: the jealous wife, the spurned lover, the aging thespian, the covetous understudy, the gambler brother. It will take all of Amory’s cleverness, Milo’s charm, and the pair’s connections to reveal the truth before the final curtain.

An Act of Villainy, the fifth in Weaver’s Amory Ames series, sees Amory and Milo finally working more in tandem than at loggerheads, which is refreshing. For much of the series, Amory has spent as much time doubting Milo as the suspects. And while she has moments of frustration over her husband’s lothario ways and casual manner, the two have plenty of moments to shine together.

Fitting, since fidelity is the dominant theme here.

“Where did Mrs. Holloway fit into all of this?” I asked. “Did you ever seen her at the theatre? Did Mr. Holloway ever talk about her?”

“This is the most charming interrogation in which I have ever taken part,” he said with a smile.

I returned his smile, doing my best to look abashed. “If I am honest, I have a bit of a personal investment in the matter. Georgina Holloway is a very dear friend of mine, and I have found this whole situation to be very distressing.”

“You needn’t fret, my dear,” he said. “I suppose it will end well enough for your friend now. She’ll get her husband back, after all. Their family will be mended, and that’s a happy ending, isn’t it?”

“I’m not entirely certain of that,” I said. “Mr. Holloway has made rather a mess of things.”

“He doesn’t seem to have appreciated her the way he ought to have.” He glanced over to where Milo was still engaged in conversation with Miss Dearborn. “Few men, in fact, appreciate their wives to the extent they deserve.”

I followed his gaze and didn’t have to feign annoyance. I had told Milo to try to get information from her, not to try to get her in his lap before the evening was out.

Mr. Lebeau smiled. “Husbands are a rotten lot, on the whole. That’s why it’s sometimes best to forget one has one for a while.”

As with the previous Amory adventures, there are colorful characters abound and more than a little melancholy: for lost loves, soured relationships, and great talent cut off far too soon.

Amory herself remains a relatable and understandable narrator. She may be a wealthy, beautiful socialite, but her life isn’t perfect, and she empathizes deeply with people; her moral code also demands that she uncover the truth, no matter how unsavory and regardless of the class or standing of those involved.

Milo, of course, remains mostly inscrutable. One can’t help but picture Laurence Olivier’s Maxim de Winter whenever he speaks. He runs so hot and cold and remains mostly at a distance despite his frequent “darlings.” Still, his exchanges with Amory are always entertaining.

The plot itself unwinds at a steady pace. Weaver does a masterful job of sprinkling in breadcrumbs and muddying the waters just enough that the last act will almost certainly take you by surprise, even if you’re a well-read armchair sleuth.

In the end, An Act of Villainy is aptly named: proof that anyone may be wearing a mask or playing a part in a sinister story.

Read an excerpt from An Act of Villainy!