Review: All Things by Amber Belldene 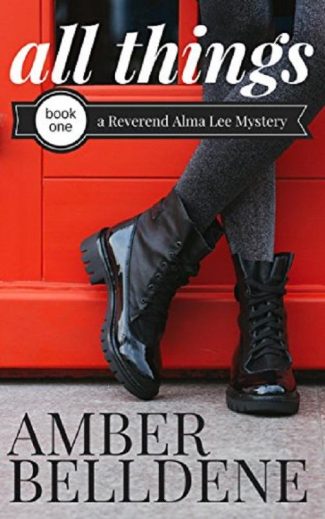 All Things by Amber Belldene is the first book in the new Reverend Alma Lee Mystery series.

Meet the Reverend Alma Lee as she rocks out at the final hurrah for The Carlos Club, a lesbian bar in San Francisco’s Mission District. Alma wears many hats—she’s a “vicar, agitator, despiser of 90’s dance music”—and tonight she performs secular funeral rites to the tune of Johnny Cash’s “Ring of Fire.”

I blew out a breath. Much more fitting for the solemn occasion—the death of a landmark, an icon—the closing party for the city’s one and only dyke bar.

The proprietor, Cindy, is a long-time friend of Alma’s. After Alma’s bitter breakup with homicide detective Cesar Garza, Cindy got Alma drunk innumerable times, and Alma returned the favor, holding Cindy’s hand during the 90 days since the “landlord had taped an eviction notice to the door.” Cindy blamed gentrification, but Alma knows better. Her friend “had the business sense of the houseplant drooping in her office.”

Like any good wake, the party takes on a life of its own, and the cops appear. Who should it be but Cesar’s younger brother, Mario, and his partner? Mario cuts Alma some slack, warning her to keep the noise down and “wrap things up on time.” Mario’s trim blond partner is curious, wondering why Mario didn’t simply close the bar down.

Blondie tipped her head toward him as they walked out. I could practically hear him telling her, That’s my brother’s lesbian ex-girlfriend. The woman scratched her scalp beneath her tight ponytail.

Yeah, honey. Cesar and me make me scratch my head too, but that’s all over now.

Besides, Alma is intrigued by a stranger, Naomi, who quickly identifies her as a priest— “Elementary, my dear Alma” —and suddenly, Alma is back in the game, hoping to get to know her better. The intriguing Naomi is Rabbi Naomi Cohen. Complicating matters, Naomi’s brother is the new proprietor of The Carlos Club. Alma is smitten nonetheless. Their promising conversation peters out when Cindy drunkenly announces that maybe she won’t close The Carlos Club after all. The old friends quarrel, and Cindy tells Alma to get out.

The next morning, on her way to conduct Morning Prayer at 8:30 a.m., Alma sees what she thinks is a transient, “curled into a fetal position.” Not an unusual occurrence in the shadow of St. Giles, a city parish. But it’s Cindy.

I dropped to my knees and did what every priest worth the price of her vestments would do when words failed. I recited a prayer, straight from the book.

“Into your hands, O Lord, I commend your servant Cindy. Acknowledge a sheep of your own fold, a lamb of your own flock.”

Alma calls the Mission police station. Her ex, Cesar, is assigned to the case. Cesar asks her to help him break the news to Cindy’s wife, Lynn. Lynn is distraught, and after asking a few pained questions, stumbles over to the bar cart.

She unscrewed a bottle of bourbon and poured some of its contents into a glass. I checked my watch. 9:45 a.m. But hey, it’s five o’clock everywhere when you find out your wife has been murdered.

Alma’s acerbic, gallows humor is one of the pleasures of All Things. She has kick-ass observation skills too—noting every minute change in her beloved Mission District. Alma decides to lend the police a hand in solving Cindy’s murder, whether they want her help or not. She’s the latest crime-solving minister/priest/rabbi protagonist, something she readily admits when her friends Lily and Suze accuse her of meddling. Alma says she’s “pastorally nosy” and admits to having “a lot of passions.” Is her penchant for getting to the bottom of whatever interests her a case of life imitating art?

I refilled my glass. “There’s a long tradition of clergy who solve murders.”

Lily cleared her throat. “You realize those are all characters in books?”

“So? Books are true.” When they didn’t immediately agree, I tacked on, “In the deepest sense of the word.”

A fitting pronouncement for a priest who daily preaches the Biblical Word of God. Words matter to Alma.

All Things (taken from the first line of the 1848 hymn “All Things Bright and Beautiful”) is the first of the Reverend Alma Lee series. Alma treads a fine line between ministering to her flock at St. Giles and living up to her reputation as the “high priestess of Mission Street.” Adding an intriguing side-note, both Detective Cesar Garza and Rabbi Naomi have a claim of affection on Alma’s heart. Readers will look forward to Amber Belldene’s next mash-up of priestly duties and forays into detection. It’s a worthy addition to the genre of clerical mysteries.