Review: After the Monsoon by Robert Karjel 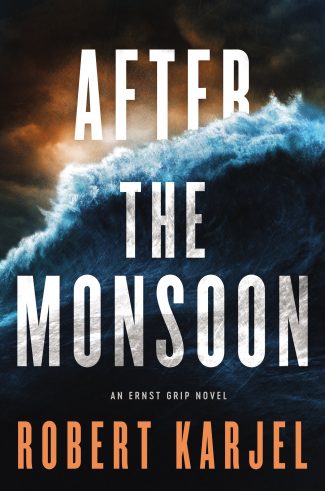 After the Monsoon by Robert Karjel, the author of the international bestseller The Swede, is an electrifying thriller set in the terrorist- and pirate-infested world of the Horn of Africa—where the sea caresses the desert, alliances shift like sand, and a Swedish detective can count on nothing but his own shrewdness to survive.

Ernst Grip is a member of Säpo, the Swedish security police. Most of the time, his duties are in the bodyguard division, escorting members of the royal family during their public activities. But every so often, he gets seconded to other units due to his reputation as a fearsome hand-to-hand fighter. The anti-terrorism unit is perhaps the most violence-prone of the Säpo, so there’s a natural assumption that Grip will fit right in as they act on a tip, storming an apartment in an immigrant neighborhood. And to a certain extent, they’re correct: if there’s any fighting to be done, Grip is your man. He draws the line, however, when two of his fellow officers drag one of the men they find into the apartment’s bathroom and begin filling the tub.

While Grip is a man of principles, he is also a man of foresight, and he knows what standing aside while his cohort performs illegal acts could mean for him:

But at worst, when everything had gone wrong and they needed someone to blame, the stink could blow back in his face. With the right mix of insider tips, angry Muslim representatives, and prosecutors smelling blood, he himself could be held accountable in a courtroom, because he hadn’t intervened before the splashing and screaming in the bathroom began. A goddamn little Nuremberg Trial, you taking the stand to say you’d followed an illegal order. He’d end up as the face of the Waterboarding Association in Sweden. And the others would leave him holding the bag. They’d waste no time in closing ranks, shutting out the one who came along as an extra[.]

Why did they think he’d bear the cross for his coworkers? Just for a good cause?

Grip is less cynic than realist, and he knows full well the importance of doing the right thing, even if others may not. In fact, the theme of “clean hands” permeates this thoughtful, sophisticated spy thriller as our not-spy is sent to Djibouti shortly after the apartment debacle to investigate the shooting death of a Swedish lieutenant on an American firing range. The local Swedish military—based off the HMS Sveaborg with the primary objective of hunting pirates in the Gulf of Aden—has wrapped up the case with a neat bow and presents their findings to Grip, which includes a local man in prison for the crime. This immediately raises Grip’s suspicions, and as he digs further—often employing questionable methods to get results—he discovers that the story the military wants to believe is far removed from the truth.

Getting to that truth puts him in the path of Judy Drexler, the Coordinator of Consular Affairs for the local American embassy, who has her own interest in his investigations. The bargains he strikes with her—not only to apprehend the lieutenant’s killer but also to assist in the recovery of a Swedish family kidnapped by Somalian pirates while sailing around the world—raise acute questions for the discerning reader: how do we reconcile ignoble acts with higher aims? What do we owe to those who help us? What is the price of a human life?

On this last question, especially, I was utterly fascinated with how different the Swedish point of view is—as presented by Robert Karjel—from the Anglo-American perspective that permeates most of today’s thrillers. To most of the Swedes in After the Monsoon, a life is not something to be taken with ease—a wildly differing viewpoint from the shoot-’em-up mentality you get from the majority of the genre.

I was also impressed with how much we learn about Grip’s interior life. Not just his thoughts on crime-fighting and morality but also his sense of responsibility and the aching loneliness in his life since the death of his partner a year previously:

One thing he never guessed would disappear so quickly: friends. Their mutual acquaintances had in fact been mostly Ben’s. It was in New York that they’d had their life together, Grip being the one who came and went. But Ben was always there; he was the anchor. During the final year, their closest friends helped out when Grip had to return to Stockholm and his job. From some unthinking comments, he gathered that a rift had opened; they couldn’t understand why they were expected to care for a vomiting and trembling Ben, while Grip was off escorting a Swedish princess in London. The better off the friends were, the less they seemed to recognize that someone actually had to earn money to pay for what Ben needed. Grip realized that some saw him as cowardly and irresponsible.

Despite all the dinner and trips they’d shared over the years, after the funeral it all dwindled down to a few dutiful emails.

After the Monsoon is a multi-layered international thriller that eschews easy answers to our modern conflicts while also centering the humanity of its protagonist in such a way that we readers never forget that real people—not cardboard cutouts or cartoon superhumans—risk their lives and their humanity to protect and preserve us. It’s a devastatingly realistic critique of modern espionage and warfare made more intriguing by its decidedly unique perspective amidst the macho posturing of most popular thrillers today.