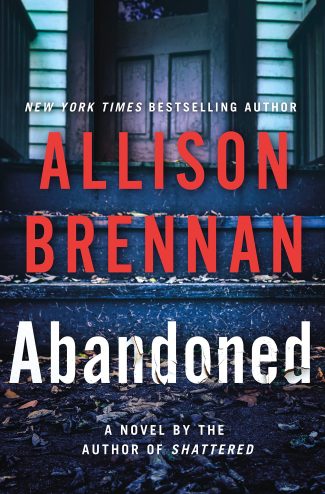 Abandoned by New York Times-bestselling author Allison Brennan is the fifth book in the Max Revere series, which weaves the intimate, unputdownable story of an investigator confronting the most important—and most dangerous—mystery of her career.

Take a visual tour through Abandoned with GIFnotes!

Abandoned is the fifth book in the Max Revere series but my first foray into the world of the cold case investigative reporter. New York Times– and USA Today-bestselling author Allison Brennan brings her expertise and talent to the page with this riveting entry in the series. Here, Max isn’t looking into just any other case, she’s opening the Pandora’s Box that is her mother’s past.

Martha, Max’s mother, left her with her grandparents when she was nine and never returned. After Martha stopped accessing her trust fund for seven years, the grandmother had her declared legally dead. But there were no real answers, no definitive knowledge of what had really happened to Max’s mother. So Max is ready to seek out the truth and close this chapter of her life. Or is she?

Max is a very strong and independent main character. She’s beautiful, smart, and beyond capable of taking care of herself and her own. Yet, her difficult past has colored her life, and though she is a successful adult now, she still wants to know what really happened to her mother. This leads her to Northampton, Virginia, the last known place to which her mother could be tracked.

But this wasn’t really a vacation, and while soul searching might be part of the journey considering she was looking for answers to her past, she would never forget the real reason she’d come to the Eastern Shore of Virginia: to find out what happened to her mother.

That her mother had abandoned her car here, of all places, seemed odd. True, it had the ocean that Martha Revere loved so much. Martha loved boats, preferably yachts owned by rich, sexy men. They’d once spent three weeks on a luxury liner with one of Martha’s boyfriends when Max was eight.

Brennan reveals lots of information about Max’s mother as the story unfolds. Martha is hard to like and even harder to relate to. She’s a one-of-a-kind, selfish, and uncaring woman who got in over her head with her dangerous games as she found her equal in partner Jimmy Truman. In fact, Martha left Max because Max cramped her style when she got with Jimmy. Cruel and cold-hearted, Martha went on to live lavishly on her trust fund, hopping all over the world.

During her travels, Martha would occasionally send Max postcards, each with a picture of a piece of art that she liked. Now, Max uses these postcards to figure out just what Martha had been up to. Knowing her mother’s rich lifestyle habits, Max is left wondering why Martha had come to such a whimsical and small Virginia town and then disappeared.

Quaint and quiet towns were not Martha’s style. The resort in Cape Haven was very loosely called a resort. When both the restaurant and room service shut down at ten on the weekend—and nine during the week—Max knew that her mother wouldn’t have stayed here. She could have been just passing through. Norfolk was on the other side of the Chesapeake Bay Bridge-Tunnel.

Or, she could have been here because of Jimmy Truman.

Max had never understood her mother when she was a child who simply followed where her mom led. Now? Max had met women like Martha. Women who were innately selfish, but always felt they needed to be with a man. As if her self-worth was partially determined by her boyfriend. Martha wanted to be attached to someone, but she didn’t cling. She dumped her boyfriends when it was no longer “fun.” A narcissist? Perhaps. She seemed to like to cause conflict for the simple reason that conflict excited her.

Each question leads to more confusion. It’s a complex case, but Max won’t stop until she solves it because the stakes are personal and as high as they can be. It’s a difficult journey that dredges up old memories while illuminating new information that isn’t so easy to receive. Martha’s misdeeds were not without consequence, and her actions were far-reaching, which help supply Max’s drive to seek out the truth.

What had happened to her had made her stronger, but had also damaged everything in her life. Her relationships—romantic, personal, and professional—had been impacted. Her inability to trust, her way of keeping people at arm’s length, and her drive to uncover the truth in everything had all come at a cost.

Abandoned is loaded with twists and turns that kept me hooked and thinking I had things figured out only to be surprised again. It also features plenty of great characters with which to get invested. The story stands alone with ease, giving the reader a nice review of Max’s life and work and enticing the reader to want to know more, which makes this a great point to jump into the series for new readers.

Read an excerpt from Abandoned!