Review: A Tale of Two Murders by Laura Thompson 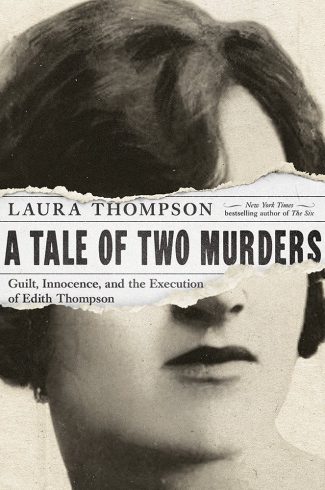 A Tale of Two Murders

A Tale of Two Murders by Laura Thompson is a riveting account of the notorious “Ilford murder” which became a legal cause ce´le`bre in the 1920s and led to the hanging of Edith Thompson and her lover, Freddy Bywaters.

She had made a grave mistake, believing that she had more power and freedom than she actually had. This is true of many women—indeed it is still true today, however much we might wish otherwise—and it begins to explain why Edith Graydon, later Thompson, became a kind of Everywoman figure: not just in her own era of the 1920s, but ever since, whenever her story is told.

She was so ordinary and so extraordinary. Her fate was so predictable and so random. She got under people’s skins, as some women can do, with their flagrant, poignant admixture of display and mystery. Everybody had an opinion about her—everybody she knew and encountered; everybody who read about her—nobody was indifferent to her.

She was hanged for murder, but she was the kind of woman that other people want to kill.

In October of 1922, as Edith and Percy Thompson were walking home from the theatre, a man approached them and stabbed Percy to death.

The man—Freddy Bywaters—was Edith’s lover. And when he was taken up by the police and charged with the murder, so, too, was Edith.

Both Edith and Freddy swore that she had no knowledge aforethought of the crime. They had not been collaborators in the act; she had not urged him to remove her husband so they could be together. Of the violent act itself, she took no part.

But for the people of England, her adultery was proof enough, and the passionate, eloquent love letters she had written Freddy were submitted as the primary evidence against her in the ensuing trial. The court declared them equally guilty, and both were hanged for the killing of Percy Thompson.

If you’re gritting your teeth and shaking your fist at the screen right now, angry that I would give away the whole story, just wait. Because while A Tale of Two Murders may be about that infamous true crime and trial, it’s also about something else entirely.

…Fourteen women were ‘respited’, as the legal term had it. One was deemed insane and another, aged seventy-two, had dementia. Two were reprieved on grounds of drunkenness. Mercy was recommended and given to one who cut the throat of her husband’s lover; this was a crime of passion, which implied lack of premeditation. The same reasoning was applied to two women who knifed their common-law husbands. And two child-killers were reprieved, thanks to a twist of circumstance that surely struck even the sober men of law: they were pregnant.

So might a kind of logic be discerned? The authorities executed women who had become ‘unwomanly’; who had behaved in a manner so unnatural that it rendered them equal indeed with men, and obliterated any special privilege of gender.

Thompson builds a multi-tiered story here, with the murder and trial as its foundation. Layers of biography are added, fleshing out Edith, Freddy, Percy, and the rest of the cast until they cease being dispassionate names in a history book and become breathing, bleeding people again.

We’re given snippets of Edith and Freddy’s correspondence—the same letters that ultimately sealed Edith’s fate—as well as journal entries and notations collected during the trial from those in their orbit.

And, throughout it all, Thompson cleverly interweaves criminal history and social commentary, deftly pointing out all of the awful hypocrisies and double-standards affixed to women.

This is as much a tragedy as it is a true-crime narrative, a story of a woman who dared to defy the rules of a strict, conservative society—and paid for her daring with her life. A Tale of Two Murders isn’t so much a cautionary tale as it is a condemnation of all the ways society limits and punishes women disproportionately to their transgressions.

She wrote out of frustration, and sometimes palpable despair, but still, she wrote. She did so because she had a fierce driving sense of what could and should be hers: the things beyond her grasp that nonetheless winked at her, so close and so elusive, like the lights on Piccadilly Circus, the last thing she saw before she descended into the underground on the night of 3 October 1922 and never emerged again. She wrote letters, but really she was seeking to write her story: to catch hold of it, seize it by the shoulders and control its course. ‘In your mind make your own end,’ she wrote to Bywaters, of a novel whose conclusion seemed to him unsatisfying. ‘Its lovely to do that…’

She also wrote that ‘the endings are not the story’. Which is sometimes true. Her own end, indeed, was so apparently remote from what had gone before that in fiction it would seem scarcely credible. At the same time the connection was there. It was precisely because she tried to control her own story that its final chapter was snatched from her, along with every last vestige of autonomy. She had tried to grasp the numinous, as artists and lovers do. Doing so took her to the finite, to an ending place as graceless as an abattoir.

Thompson is a skilled writer with a gift for twisting beautiful phrases in unexpected places—her philosophic observations are interwoven with plain fact. She’s clearly an exhaustive researcher, leaving no stone unturned in her search for the full picture.

And she treats her central subjects with kindness. She doesn’t pardon the central crime of murder, and she’s certainly not advocating for adultery; it’s clear from start to finish that Edith was a complicated woman who didn’t always make the right choices.

But still: Thompson writes of her with empathy and far more compassion and understanding than she was given by contemporaneous writers. She presents her as a whole person rather than a shrewish caricature or evil harlot; she makes us mourn what could have been for such a bright and determined woman.

Obviously, this isn’t light and easy reading. Thompson demands serious attention of her audience, and it takes time to follow each narrative thread to the executioner’s noose. But if you’re willing to invest the effort, A Tale of Two Murders will reward your commitment with a powerful, emotional story of true-crime and punishment.