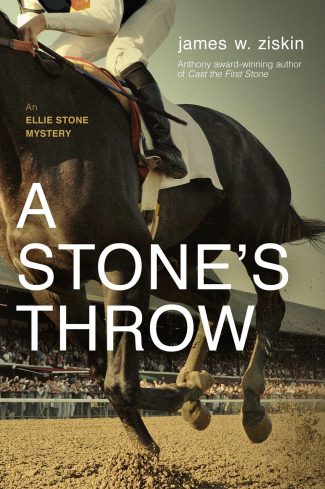 A Stone’s Throw by James W. Ziskin is the sixth book in the Ellie Stone mystery series, where the young newspaper reporter investigates a double murder at an abandoned stud farm near glamorous Saratoga Springs in 1960s’ Upstate New York.

It is August of 1962, and “girl reporter” Ellie Stone is first on the scene at the latest of an intermittent series of fires on the abandoned grounds of the once proud Tempesta Stud Farm, halfway between her home in New Holland and the racing mecca of Saratoga Springs, New York. The local sheriff is so unconcerned by the incident that the first uniformed responder is the sheriff from Ellie’s own county, her old pal Frank Olney. He’s more than happy to let her poke around for a story after the fire department finishes putting out the blaze. They both get more than they anticipated, however, when Ellie discovers not one but two charred bodies amidst the wreckage.

The coroner quickly establishes that the couple—a man wearing racing silks and a woman in furs—were murdered before the dilapidated barn they were found in was deliberately set on fire. With the help of her best friend and inveterate gambler Ron “Fadge” Fiorello, Ellie begins to dig around the local racing circuit, asking questions in pursuit of her story. At his urging, she decides to take a flutter for the first time in order to really get the whole Saratoga Springs experience:

Despite the intermittent rain, I felt the excitement of the moment. The horses were magnificent, and the pageantry festively elegant. The clubhouse and grandstand brimmed with nineteenth-century charm, in spite of the cigar-chomping men in sweaty shirts and rumpled hats nearby on the grandstand side. I found the experience electric, made even more so by the secret knowledge that I had two big ones riding on some wonder horse named Sunstruck wearing the number two on his saddle cloth. And, shortly after two p.m.—a good omen, I thought—a bell rang, and the starting gate bolted open. My horse took a short while to get his head into the race, but by the quarter pole, he’d taken the lead. And to my utter disbelief, he held on the rest of the way and won by less than a length […] For a few heady moments, I understood how gambling might become an addiction. Winning was a thrill.

But it is this addiction to winning, she soon discovers, that set into motion many years ago the events that left two bodies in smoldering ruins. Using all the resources at her disposal, Ellie unearths long-hidden secrets of gamblers, match-fixing, and gangsters that imperil her life as a ruthless killer takes no chances at being discovered.

I’d never read any of the Ellie Stone mysteries before A Stone’s Throw, but I’m going to fix that oversight as soon as I can, as this was a really terrific novel. It felt almost as if the original Nancy Drew had grown up and was living independently as an investigative reporter, with all the indignities attendant on being a young woman making her own way in 1960s America. Ellie is also Jewish, which adds a whole other layer of aggressions—overt or micro—for her to contend with. James W. Ziskin writes with extraordinary perception and sympathy, tackling the bigotry and sexism Ellie faces in both her personal and professional spheres. In just one example, her work is constantly held hostage by the owner of her newspaper, Artie Short, who sees nothing wrong with reassigning all her articles to his son-in-law, George, after she’s done all the legwork. After one particularly brutal encounter, her editor, Charlie Reese, is forced to intervene:

Charlie whisked me out of Short’s office, quite red in the face himself, and, dragging me by the arm, scolded me in the most forceful tone he’d ever used with me. But I have a temper, too. Girls are raised to behave. Grow up to be a lady, keep your knees together and your mouth shut. Look pretty, by all means, dear, but fetch me another cup of coffee. And, while you’re at it, Georgie Porgie, here, is going to take credit for all your hard work.

Ellie has a lot of allies—both professionally and socially—but the various stings she suffers as she navigates her career paths and social circles wound more deeply than she’d care to admit. Fortunately, our heroine is as resilient as she is intrepid, and reading of her adventures is a stirring and sometimes sobering look into the mores of the era (and how they still echo through to our modern times) as seen through the lens of her generous wit and sharp observational skills.

I also enjoyed how those traits were applied to the study of horses, racing, and gambling, in addition to the solid investigative reporting. Mr. Ziskin’s descriptions of horse racing and the structures—physical or otherwise—that have grown up to surround it reminded me of the best of Dick Francis’s mysteries in the authors’ shared enjoyment of and respect for the sport. As someone who will likely always be a wee bit horse-mad, I greatly relished the equine theme. While the other novels in the series to date don’t focus on horses as this one does, I’m champing at the bit for more Ellie Stone regardless, as this was a great introduction to the series for me.

Read an excerpt from A Stone’s Throw!